B-movie horror? Check. Choose-your-own-adventure? Check. PlayStation exclusive? Check. Until Dawn has a perfect recipe for success, at least in my book. When I started Supermassive Games’ survival horror adventure, I had little information about the game itself and what would happen next. And, to be honest, that’s exactly how you should approach this game. So, if you haven’t played (or heard of) Until Dawn before reading this post, I suggest you stop reading, order the game, and hold of on researching anything Until Dawn-related until after your first playthrough. Trust me.

I’m the type of person who becomes obsessed, devouring all blog posts with theories, hints, walkthroughs, etc., and I’m glad I waited until after “beating” the game to read them. This is one experience you don’t want spoiled for you. I went into Until Dawn knowing only two things: 1. It featured well-known actors as the character cast (ahem, Rami Malek—Mr. Robot, Night at the Museum) and 2. People likened it to The Cabin in the Woods for gamers. Sold.

I should preface this entire post by saying I’m a huge horror movie junkie, however I’ve not yet been able to play through a horror video game due to bad childhood experiences trying to play the PC-original Tomb Raider. And yes, I know that’s not considered a “horror” game. But—oh!—Until Dawn is so much more than just a horror game with the gimmick* of Hayden Panettiere et al. Until Dawn is a fully immersive experience, where even on playthrough two, three and four, I’m still scared out of my wits (probably even more so than the original playthrough), and unlocking more of the in-depth and expansive story. Supermassive did choose-your-own-adventure justice by bringing in horror movie legends Larry Fessenden (You’re Next, 2011) and Graham Reznick (The Inkeepers, 2011).

Starting Until Dawn might feel like every horror trope wrapped up into one video game. And that’s kind of the point. But, what’s even better is that as the player, you’re aware of these tropes and you’re given the power to change (some of) them. For instance, in the intro we see a group of college-aged friends and their college-aged antics in a remote cabin, on a snowy mountain top, and oh! look! there’s a creepy man with a machete standing outside. Watching. Waiting. Sound familiar? (I’m looking at you, Jason.)

This intro sequence is one of the only moments in the game where your decision doesn’t really have any barring on the story. Because, as you’ll find, Until Dawn has fixed points in the game that just have to happen to progress the story. Unfortunately, this is the one downfall of the game. It’s not a knock against Supermassive, but it shows that we haven’t quite figured out how to make a game where the playing experience is entirely unique to the player. I think we’ll get there, and this aspect doesn’t make Until Dawn any less of an enjoyable experience. I’m more so giddy with anticipation, waiting with bated breath to see how the industry evolves from here. One thing’s for sure: Until Dawn has changed the game, pun absolutely intended. Good acting, great writing, and the ability to interact with a “movie” is both exciting and, in some instances, my preferred method of playing a game. Best of both worlds, right? 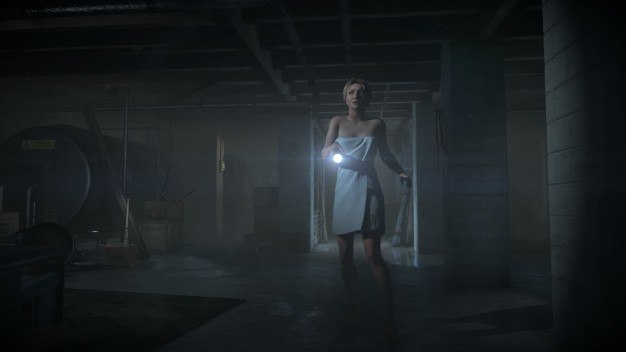 Decisions are a matter of life or death. What to wear during exploration: towel or no towel?

Throughout the game, there are a few ways you’re able to interact with the characters and your surroundings, all of which have the opportunity to change something later on in the game. There are movie sequences, which I’m considering any point where you don’t have control over your character’s movements and your focus is dialogue, and then there are action sequences.

The movie sequences, which at first might seem like a gaming cop-out, because isn’t not your traditional gameplay, will quickly change your mind when response decisions suddenly pop up on the screen—are you okay with your best friend macking on the girl you’re into, or do you get defensive? Tick, tick tick… you only have a few seconds to make any decisions in these movie sequences. These decisions change how the characters interact with one another. If you don’t stand up for your girlfriend, she might not be as willing to help you in a life-threatening situation. But someone else might. And that’s what makes these decisions so terrifying: you have no idea what choice will kill off a character down the line, or keep them alive. 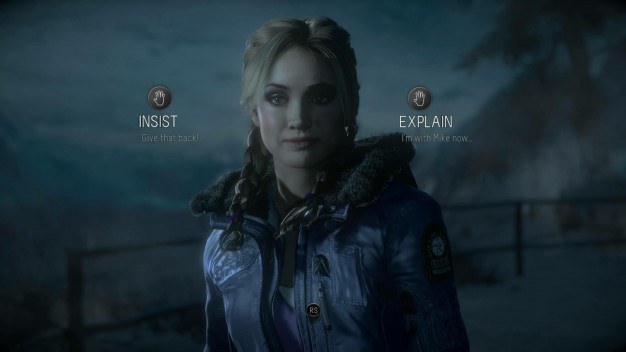 An important thing to remember when making these dialogue decisions is that you have the ability to do nothing. Much like the The Walking Dead seasons from Telltale Games, no action is a perfectly reasonable response, and can change the story just as much as performing an action might. Or, as Nemo (Jared Leto) from Mr. Nobody puts it nicely:

“You have to make the right choice. As long as you don’t choose, everything remains possible.“

Then we have the action sequences, the moments when you’re in control of your character and are able to interact with your environment. That means walking. And you do a lot of it in Until Dawn. Almost too much. I could have done with about 25% less walking, even though I know it was used as a method of delivering the story to the player. While walking, you can view or pick up objects that glow in your line of sight. If using the motion control of your PS4 controller, you’re literally turning the controller over to examine the object, a lovely touch that made the game much more immersive. Along the way you’ll find objects to solve three stories: 1. The deaths of Beth and Hannah; 2. The Miners; 3. The Mysterious Man. There are also totems, or objects that predict the future. A future you might be able to change. 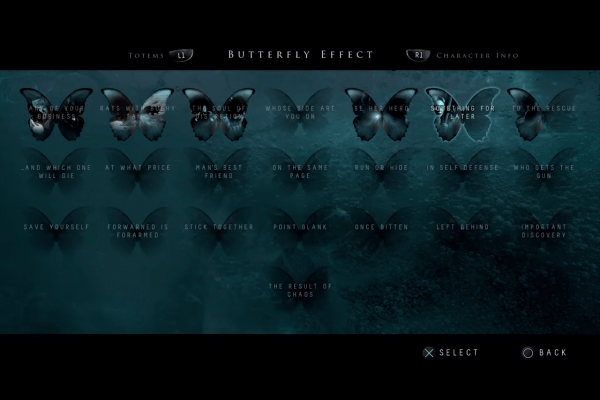 Quick Time Events (QTEs) also tend to be found in these action sequences. Before you groan your displeasure and write Until Dawn off, let me reassure you, the presence of QTEs aren’t used because of lazy writing, or as a replacement to actual gameplay. These QTEs usually appear when your character is performing an action, such as climbing a wall and needs to jump to reach the next platform. Hello QTE. Miss it, and bad things might happen. So don’t miss it. There’s one QTE near the beginning that you’re almost gaurunteed to miss during your first play through. It’s as simple as a missed high five, but the look of disappointment on the rejected character’s face almost had me restarting the game just to change that moment.

The last, truly impressive, interaction of these movie sequences is when you’re instructed to remain perfectly still. This is done with your controller which begins to vibrate in your hands. These moments always showed up in a matter of life or death, and had be literally holding my breath in an attempt to keep the controller steady. Why not just place the controller on the ground? you might be asking. Supermassive thought of this, hence the vibrating. Placing the controller on a flat surface doesn’t ensure you’re going to keep your character from moving because each vibration shakes the controller. Your best bet is to hold it against your body, and hope, pray, don’t breath. I absolutely loved this type of gameplay and hope to see it in future games. 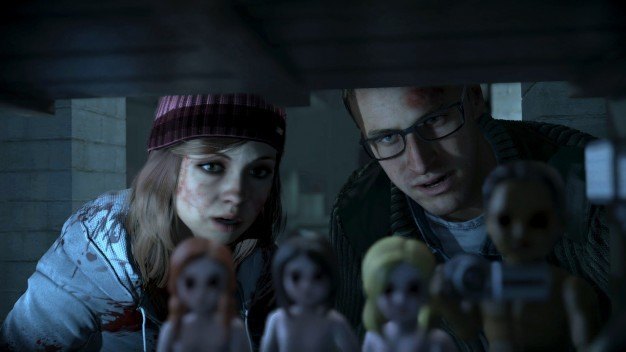 To briefly touch on the story, because really when you play Until Dawn you’re creating your own story, which will likely have been different than mine, I want to commend the writers for writing the character’s into tropes, and then placing them in situations where our opinions are changed. The base story felt well-rounded and fleshed out; believable to an extent, and once you play you’ll see what I mean. Basically, it felt like a movie I was in control of, and a good one, at that.

Until Dawn also has one of my favorite soundtracks. The theme song Oh Death, performed by Amy Van Roekel (listen here), transforms an old folk song into something so perfectly chilling, it sets the atmosphere for the game right from the start. My only disappointment is this song hasn’t been released on Spotify, and so I can’t add it to my playlist (read: Spotify, get on it).

And yes, in case you were wondering, I did listen to Oh Death on repeat while writing this review. It’s that good. The same could be said of this choose-your-own-horror-adventure as a whole. Until Dawn set out to (and succeeded in) setting a new bar for story telling in a video game.  Now please excuse me while I boot up my PS4 and play through Until Dawn. Again.

(*not a gimmick whatsoever)

Choose this choose your own adventure, Until Dawn.

All-in-all, Until Dawn sits at a solid 9.3/10, where there was room for mechanics improvement, but it’s a title 100% worthy of joining your collection. It’s a great interactive scary movie with strong dialogue and stronger story telling. And despite it’s cinematic nature, there’s even some (limited) replay value – see if you can guide everyone to survive or try to unlock all deaths.