Hearing that Dragon Sinker by the publisher KEMCO was going to be ported to the PS4 and Vita excited me. Originally, the two-year old game was released for mobile devices, and early last year, a port for the 3DS came out. KEMCO has a track record of releasing some decent RPGs, and I saw that Dragon Sinker has a great overall rating within iOS and Android.

KEMCO has a track record of publishing games that look like they were made using RPG Maker, and Dragon Sinker is no exception. However, what’s different with Dragon Sinker is obvious: it’s borrows major elements of the beloved Dragon Quest series from the looks, the feel, and straight to the title. The gameplay is its saving grace, but it still is a little bit of a carbon copy of the job system of Final Fantasy games.

The story of Dragon Sinker is your typical save the world from an evil entity. As you can guess, this entity is a ferocious scarlet dragon seeking to destroy all living creatures–humans, elves, and dwarves alike. After the Abram, the human prince, and his two buddies, fail to dispatch the scaly beast, the prince learns that the keys to defeating it are three legendary weapons long forgotten. You then take control of the prince as he searches all over the world to retrieve the sword, staff, and axe of lore. During the prince’s journey, he will befriend two key characters, a feisty elf sorceress and a burly dwarf smith, that will accompany him in his quest. 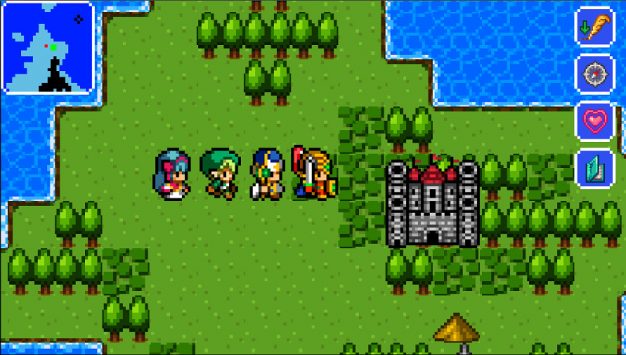 Gameplay-wise, the three key characters of Dragon Sinker lead up parties that you can customize with three followers. The followers make up the bread and butter of the game’s job system. Each main character automatically comes with one follower (who also provide some dialogue to the story) with the typical archetype of an RPG: a priest, a mage, and a warrior. You can complete side quests in order to obtain up to 16 followers and jobs. Once a follower joins, you automatically unlock that job for the whole team and any follower can change jobs for a small fee. It is also important to note here that your three protagonists are locked in their jobs and cannot be given a different one.

Reminiscent of typical job system in the early iterations of the Final Fantasy series, each follower in Dragon Sinker has job levels for each of the 16 jobs, and completing a battle earns job points towards leveling the job currently assigned. New skills are gained after leveling up a job, and there are 10 levels per job. While some skills have no cost, some require magic points (MP) or health points (HP). That’s right: HP to use a physical-based attack. 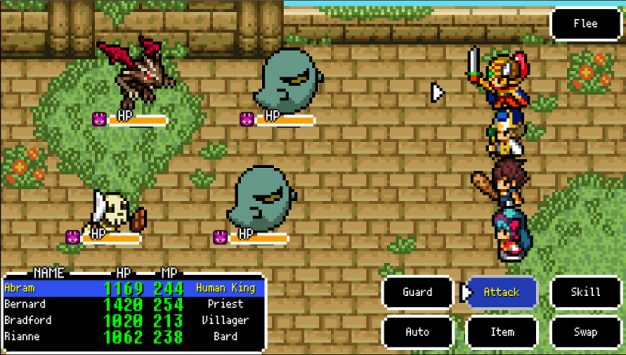 While you may think it’s better off to have physical-based jobs, since there’s 9,999 HP than 999 MP, that’s not the case. You see, the cost of skills are based off a percentage of the follower’s overall level. So in a case of two warriors, one at level 5 and another at level 10, the level 5 will always have a lower HP cost to use a double attack than the level 10. What can cause trouble is that higher level skills obviously cost more, and if you don’t have a healer in your party or keep a replenished stock of restorative items, your party may fall apart easily, since using HP to use skills plus getting damaged is a double whammy. However, in my play through, I haven’t seen a skill cost more than 35% of a follower’s HP or MP.

Luckily, the customization of the party and job system in Dragon Sinker helps keep your party’s HP at bay. There’s a bunch of healer-based jobs, from the standard priest to the eccentric baker. There’s also the auto skills of each job. Each job features a passive skill that becomes a permanent fixture in a follower’s arsenal once he or she masters the job. These skills range from getting a regenerative HP or MP buff at the start of each turn to mitigating skills’ costs. There’s even one that automatically leaves a follower with 1 HP if he or she gets damaged to the point of swooning. As far as the three main characters with locked jobs, a scroll is obtained once for each job mastered that transfers that auto skill to the main character selected to receive it. 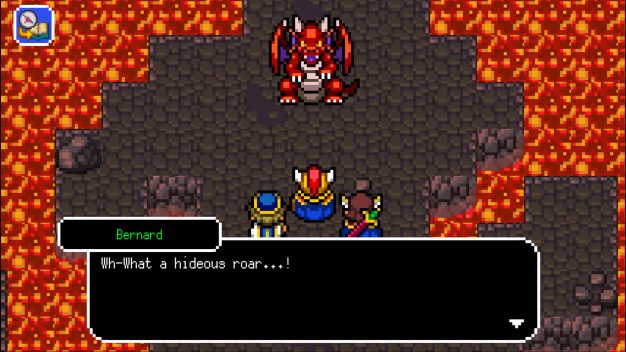 I’ll be honest though, even with the customization options you have in your arsenal, you’ll end up relying on the same low- to mid-level skills that give the most bang for your buck. With Dragon Sinker being a KEMCO game, if you really feel like the game is kicking your butt, you can always change up the difficulty (although going for hard and expert difficulties give you more experience and money at the end of battles). You can also purchase premium content using the lottery system that gives you a chance to earn epic equipment to the rare animal followers like a sneaky cat (based on the thief job).

Overall, while the story of Dragon Sinker is so-so, its aesthetics and gameplay will definitely satiate those who are craving the good ol’ days of Dragon Quest and Final Fantasy. You’ll get to recruit some followers, level up their jobs, and create the ultimate party to defeat the evil dragon once and for all. Oh, and if you’re lucky, you can get a cat with the scratching skills of death in that ultimate party.

Defeat the Dragon by Finding the Three Legendary Weapons

-Skills may cost percentage of MP and HP