The collectable card game genre seems to have earned itself quite a bit of stick over the past few years, some of it well-deserved. Many CCGs are designed purely for mobile gaming or are basically meta games where you build your deck and the game does the rest, with little to no skill involved on the player’s part. The mobile market especially brings its own pay-to-win demons to add to the mess, but that’s  a rant for another time. My point is, if you care to slog through the slop, there are actually some CCGs that offer something genuinely different and playable. Hearthstone is a good example, as is Hex, and of course the game I want to talk about today – Direwolf Digital’s Eternal.

I found this little marvel while I was trawling Steam’s free-to-play section. As the reviews seemed relatively favorable, I thought it was worth a quick look. I’ve been playing every day since, and can honestly say I’ve enjoyed every second of the time I’ve spent with the game. To give you a brief overview of the story, Eternal is centered around the struggle for the throne. Five scions all with their own factions are looking for power and in the single player campaign you side with each of them in turn.

The campaign isn’t really that much more than a way for you to practice with each of the five colors of cards and get an idea what they do. You’ll get some gold and a few free booster packs. It’s minimalist, but it helps in place of a convoluted tutorial. From here you can go out and start building your own decks from the cards that the game has given you. The deck building system is pretty straight forward while still offering you plenty of choice. You can build pretty much anything you can imagine within the confines of what you have. 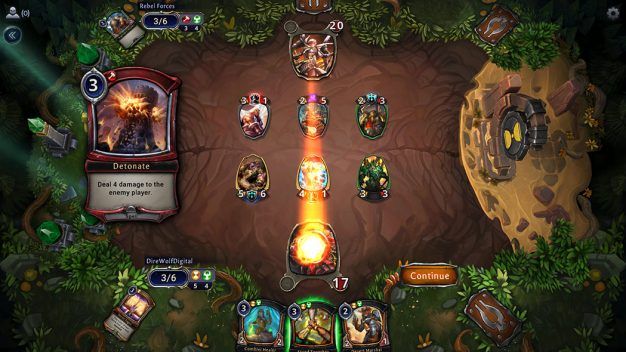 Unlike a lot of games out there, you aren’t confined from this point to versus battles.  There is a really nice bit of PvE in Eternal, something that’s relatively unusual for a card game. Usually you complete the campaign in the first five minutes and then it’s all PvP from there; some games don’t even offer a true campaign.

Here you have a choice of two modes. You can run the gauntlet, which is free, and pit your deck against a series of different computer controlled enemies capped off by a boss. You have one life and the better you do the better your rewards. You can also choose to enter the forge. In this mode you build a deck from a choice of cards and run with that in a similar fashion to gauntlet but with two lives and the ability to keep the cards you’ve chosen. This mode costs game gold to play but for the rewards it’s well worth it. The PvP side also offers a draft mode similar to forge. This costs more gold to enter but the deck building is a bit more tactical and the rewards are far higher. 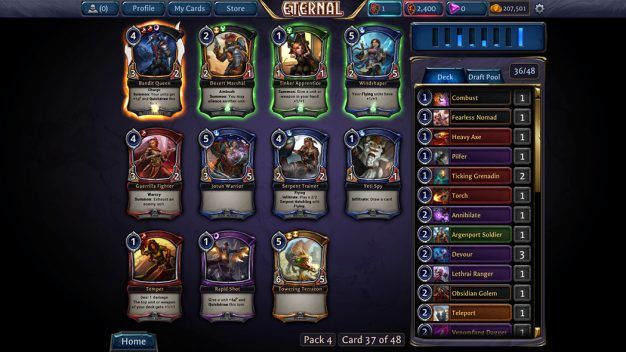 I can almost hear the distant sound of grumbling. “I’ve seen this all before,” I hear you say, “Getting gold will be really hard and it will take me an age to get anywhere.” Well actually you’re wrong. The reward system in Eternal is remarkable. Just like lots of other games out there, you get your daily quests. These aren’t anything new. You know the drill: win “x” many versus matches with a faction or play “x” many flying monsters, etc. What is different is the way you are rewarded. You are given chests which range from bronze all the way up to platinum. Each chest contains different rewards. Bronze chests will give you say, 50 gold and a card, gold contains roughly 500 gold and a pack, and so on.

What is great is that the game isn’t rigged into giving you slim pickings if you don’t pay. Each chest has the ability to get bigger, a bronze becoming silver and on up the chain. Getting platinum chests isn’t like looking for rocking horse droppings; it happens regularly.  These rewards can be garnered from the free gauntlet, which can be played as many times as you like, making  gold and cards really obtainable.  You can also make cards using shiftstone, the game’s crafting currency. You get this from opening packs so it’s all part of a natural progression. As with many F2P games out there you can of course pay to earn things more quickly but this actually takes a lot of fun out of the experience. 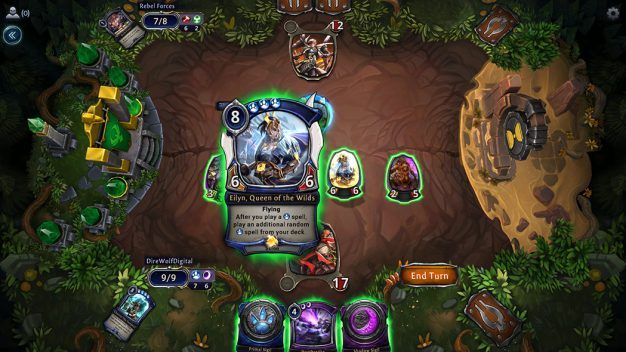 Gameplay on its surface is relatively simple. You play cards from one of the five factions using influence. You then use these cards and the abilities they have to whittle your opponent’s life points down to zero. Through practice you’ll learn to theme your decks and constantly try different strategies. For instance, “war cry,” is an ability that makes cards in your deck stronger before you draw them. You might want lots of flying cards or use the “deadly” ability for instant kills. The depth of the game comes with the choices you make and the way you play.  You’ll find yourself constantly trying new things and this gives Eternal  real longevity. The biggest flaw in the game is it’s random number generator which can give you  some really awful draws. This is something that I believe is being worked on and is really the only major problem I think I’ve found so far.

Graphically the game is really nice. The cards have beautiful artwork and the playing field, while simple is appropriate for what the game is. After all, this is a card game, we aren’t expecting next gen graphical brilliance. The audio follows the same lines. The music isn’t anything special, the sound effects are present and neither are stunning. Neither needs to be stunning as an overblown soundtrack doesn’t necessarily fit the genre. What is clearly being focused on here is playability which is the most important part of a game anyway. 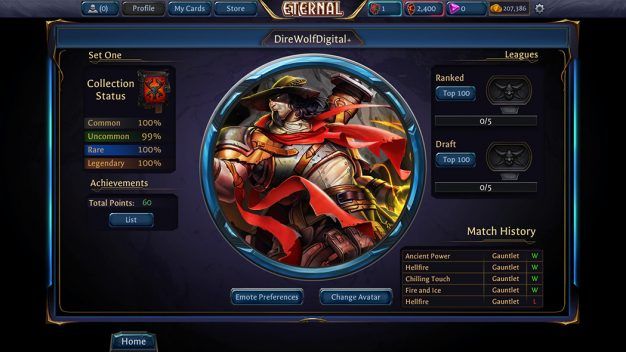 If you happen to be a fan of the CCG genre and don’t mind playing the odd rubbish hand, I definitely recommend giving Eternal a chance. You’ll find it for free on Steam, so you won’t lose anything but a little time by giving it a look. And what you hope to gain, in addition to the spoils of victory, is a new favorite F2P.

A Card Game You Can Sink Your Teeth Into.

A really enjoyable addition to the CCG genre with some really interesting mechanics. Lovers of games like Hearthstone really should take some time and give this little gem a chance.