As we get closer to summer, game releases will start to dwindle until the fall when it will seem like every gaming studio known will be releasing their games to market.  In the meantime, it might be wise to try to find a few good games to hold you over those dry summer months until the blockbusters begin to arrive.  If you are into Real Time Strategy games, Focus Home Interactive and Tindalos Interactive has just released a game that should definitely be on your list of games to play this summer.  Etherium takes place in a science fiction universe and is an RTS game where three empires face off in a merciless struggle for the control of a mysterious and rare resource known as “Etherium.”  In order to conquer the universe, you must manage scarce resources, develop bases and get sucked into fast-paced, classical macro-management RTS gameplay. 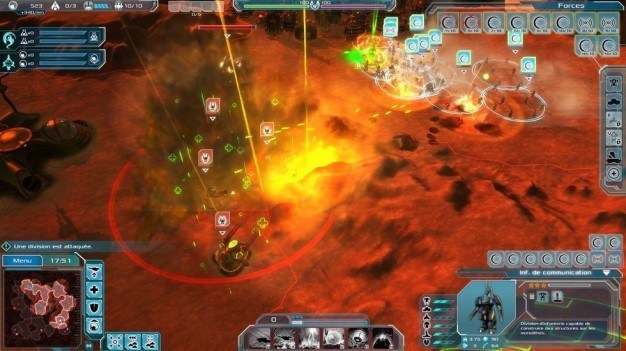 The tactical menu in the bottom center of the HUD puts tactical commands like planetary bombardment at your finger tips.

In Etherium, gameplay takes place in space and on the surface of the planets that you will attempt to claim for your respective faction.  You have the choice between three empires to represent: the Consortium (an ultra-capitalist, corporate empire managed by a board of shareholders), the Intari (an order of warrior prophets who are born, live and die in the name of etherium) or the Vectides (a highly advanced technological race that is an enigma to all who come into contact with them).  Each faction has their own unique strengths and weaknesses as well as different tactical command skills such as map exposure, climate control, or planetary bombardment.  How you approach victory is up to you from crushing the enemy colonies by destroying their bases or striking their mother-ship from the planet’s surface.  Action is fast-paced so having a good strategy for victory before you hit the battlefield is imperative. 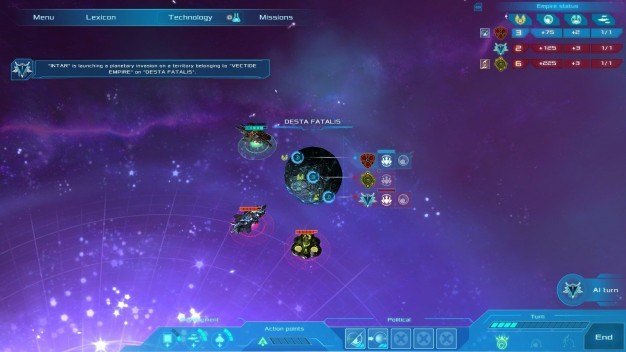 Enemy factions may have taken up residence in orbit around a planet that you have to conquer. You can’t set off for the surface until you first deal with these guys.

You can travel between known worlds with just the click of a button and if you encounter the enemy in orbit around a targeted planet, you can battle it out to clear a path down to the planets surface.  The space battles in Etherium are pretty straight forward and is a prelude to what you can expect on the surface of a planet that you are attempting to seize.  Down on the surface is where this game really shines and is where quick thinking and strategy will come into play.  Your ultimate goal is to capture each territory on the map in order to secure the etherium and use it to power your main base as well as to build combat units and support elements such as turrets, research stations or heavy artillery to protect the territories as you clam them one by one.  While you are planning out the best way to proceed, know that the enemy is also working to wipe you off the map and will strike at any opportune moment. 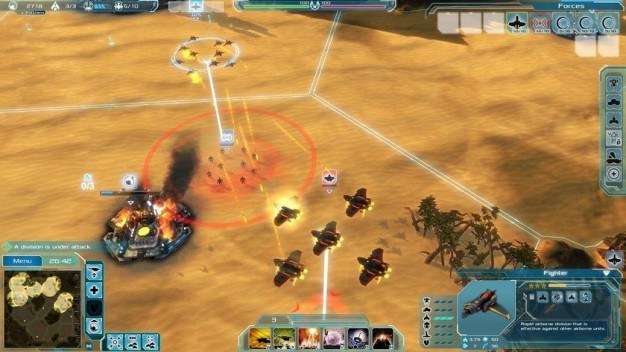 Combat squads can hoof it to just about any place on the map but there will be times when air transport is necessary to get to those hard to reach battlegrounds.

The surface of the many planets that you will visit are broken up into different territories.  In order to claim a territory you must command a squad of troops to build an outpost in that territory.  Once that is done, the etherium collection can begin.  Everything costs etherium so securing any available deposits early on will go a long way towards allowing you to stay ahead of any enemy factions on the planets surface.  You need to spend your available etherium to recruit different types of armed forces such as specialized infantry, an array of armored “combat walkers” or gigantic colossi of war.  These later, more powerful tools of war cost huge amounts of etherium but you have to develop the advanced technology required to build them because their devastating firepower and destructive potential will definitely come in handy are are necessary to capturing all territories. 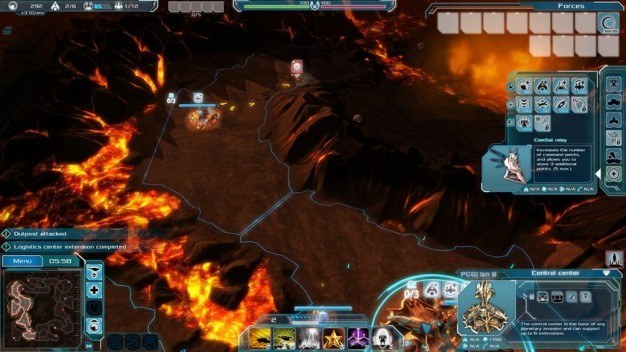 The white outlines on the map are separate territories. Outposts must be erected before any etherium can be mined from that territory.

The visuals in Etherium are very cool and present a sci-fi universe that is filled with advanced technology and unknown alien species.  Space battles take place out in the endless void of space with distant stars and planets littering the background.  Down on the planets surface, areas of rocky terrain or snow-covered landscapes are some of the environments that you will have to traverse in order to make your way around the map.  There will also be intermittent areas of tree and plant-life growth that can be used as cover so that the enemy can’t zero in on your location.  Explosions are bright and vivid and gunfire and billowing smoke fill the screen as you battle for planetary supremacy. 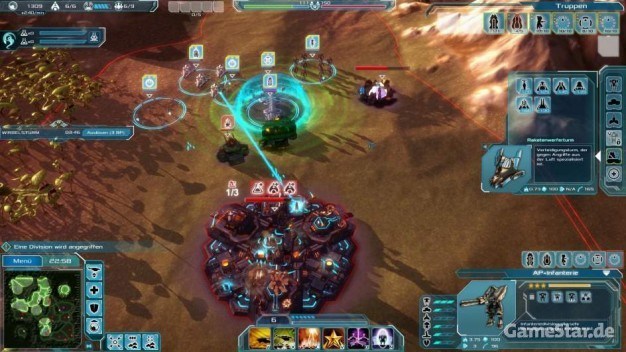 Enemies will do everything that they can to stop you from setting up your outposts in any territories that are immediately adjacent to theirs.

The sound effects in Etherium really help to set the mood and immerse you in a cool sci-fi story that will take you to the ends of the universe.  Voice overs are of really good quality and each of the characters that you will encounter seem to have been thoroughly fleshed out.  The soundtrack of Etherium is fantastic as well.  Engaging in epic combat with grand orchestral instrumentals playing in the background help to set the tone and to give the player a sense of imminent doom as danger can lurk around any corner.

Etherium offers not only three robust non-linear solo campaigns but a frenetic multiplayer that offers 1-4 players the ability to play in teams where the focus is on “high-speed strategy.”  The game mechanics in Etherium favor adaptability, dramatic reversals in situations and the surprise return of enemies who were thought to have been defeated so it’s very important to remain vigilant at all times.  Games are easy to set up and easy to get into with just a few clicks of the mouse.  Once you have cleared the solo campaigns, be sure to give the multiplayer a try as this will allow you to test your skills up against some of the best RTS players currently playing the game. 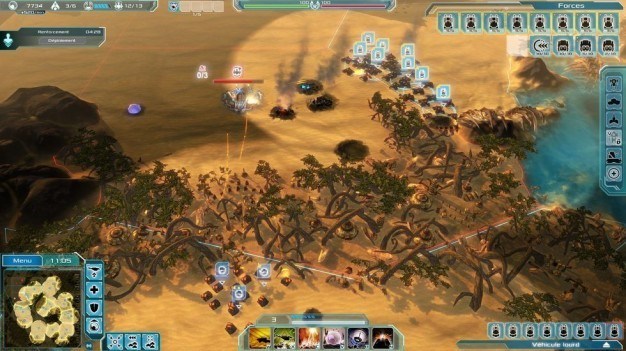 Plant life can be used as cover as well as a good area to set up a crushing ambush.

My time in Etherium was very well spent and I really enjoyed the macro-management aspect of the game because it allowed me to concentrate on simply building support staff and sending them out to do their jobs.  While I can appreciate this part of the game, the macro-management feature may be a turnoff for those who like more control over their factions and the freedom that it offers in fine-tuning every aspect of combat, resource development and exploration.  In addition, while I enjoyed the story that Etherium is built around, I have to admit that it is pretty generic as far as sci-fi stories go.  You can download a copy of Etherium from Steam now for $29.99 which really isn’t a bad price for the amount of gameplay that is packed into this game.  Spring is almost over so make sure that this is on your list of games to while away those hot summer nights.

Fans of RTS games will appreciate this sci-fi epic