I love tactical games, always have. The problem with the turn based tactics genre though is that it’s largely been shoved in the mobile gaming camp. The reason for this is that anything turn based is really easy to manipulate with time gates, energy levels and all the other silly rubbish used by developers to make money. It’s the kind of thing that’s asking to be made artificially harder too. Anything for those bucks right? I’m pleased to tell you that the game I’ve been playing of late doesn’t fall into this camp. It’s Fell Seal: Arbiters Mark and you know what? It’s not half bad.

The last tactics game I really invested myself properly in was XCOM 2. I grew up with the XCOM and UFO games so playing the new ones was a no-brainer. If you’ve had a go at this series or games like it you’ll know what this genre’s style is all about. You basically follow a story though a series of increasingly difficult battles. Your success will not only come down to planning move by move within each mission but beforehand as well. A lot of what you’ll need to succeed comes down to how you gear your troops for battle, skill them, etc. Think of it like chess but on steroids.

Something to be said for all of these game is that they’re naturally quite difficult. This is a genre of smart AI opponents so smashing through a level knowing your adversary is as thick as two short planks won’t cut it and dying is never a good idea. There are usually penalties imposed of one sort or another for losing members of your team. In XCOM you face the ultimate penalty in that if you do something stupid your lovingly crafted marine isn’t just a bit dead, they’re gone for good. Fell Seal: Arbiters Mark is a wee bit more forgiving. Here party members pick up injuries and taking them into battle isn’t something you want to be doing on a whim. They won’t be at full strength making your overall job a lot harder. 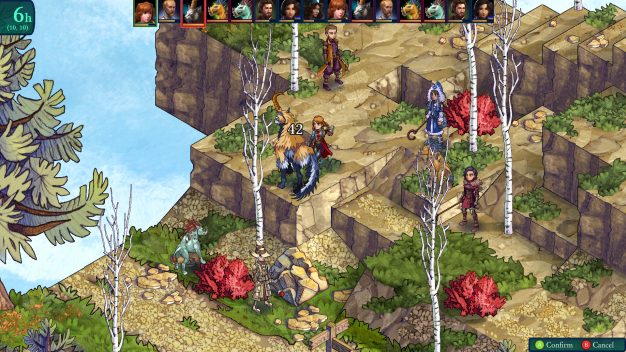 Something else to be said for the tactics genre is that you don’t have an endless supply of units to play with. You find yourself caring so much more about your characters because you can’t just magic another one out of thin air whenever you feel like it. In this case new Arbiters cost and you only have so much gold to play with. In addition to a general lack of resources, (nobody has infinite funds,) you’re creating a rod for your own back. Buying new characters is fine but you’ll have to level them from scratch. This means you care more about what you have and look after what you’re given to your best ability. You can level your characters at the guild before you buy them but that gets really expensive really quickly so it still makes sense to be frugal.

The above diatribe was quite important as everything I’ve just said applies to Fell Seal. In addition your characters are fluid and this makes things all the more fun. This isn’t a case of, buy a mage, get a mage. This is buy a mage then adapt them and mold them into something that fits your playing style. As classes gain experience and characters learn new things new classes become available. So as an example. I started out with two fighters in my party. One is my main character so has evolved into a Knight/Marked dual class. Each of these classes obviously has it’s own skill tree and operates very differently. The other is currently a Knight/Templar so while both are tanks with useful protective abilities they vary greatly in their skills. This applies for everyone in your party and it’s an innovative way to play. 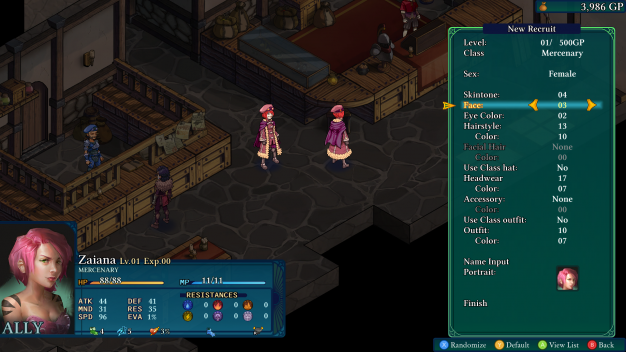 Get comfy with the guild, you’ll be here a lot.

Something I particularly like about Fell Seal is that it doesn’t just give you everything from the off. Which is a good thing really because if it did you’d get completely overloaded with information. There is a lot of micromanagement going on with this game and being given every class from the get go when they all not only skill differently, play differently but also equip different items would just be a migraine waiting to happen. So … let’s take the Mender (healer,) class as and example. At LVL 2 they can learn wizarding skills, at level four an entirely new class called Plague Doctor opens up. Each class branches out in different ways and you unlock things as you go which really helps with the pace. Plus it’s fun to see what you can discover next.

As I’ve just mentioned gold and gear I think it pertinent to talk about the shop system. In cities you have your guild and a shop. Your guild is where you buy new team mates. I would recommend having at least two of each class if you can. This will obviously take some time with not getting everything from the go. As I’ve just said you can level them from scratch for gold and customize their look. There is just enough customization here to make it fun and allow for a unique looking party without pulling you too deeply into it. We don’t want you guys who spend three hours customizing your character to have an apoplexy every time you buy a new one. The shop is obviously where you buy your gear. Gold balancing is important. Every new recruit will need gear fitting for them and this costs. As with every RPG better gear costs more and your managing quite a lot of Arbiters so you need to be a bit smart how you go about things. 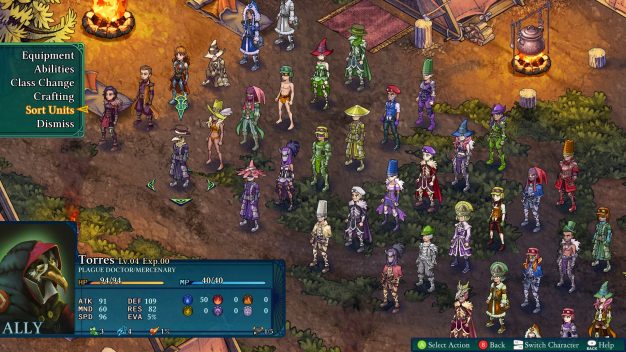 Why have a squad when you can manage an army?

The picture above shows a small army and I’ve been ranting on about looking after your troops. You won’t be using all of them in each mission but different parties yield different mixes of abilities so you’ll want them all to be in good fighting shape. The injury system means that you’ll want reserves so you can swap out benched characters. Injuries also stack. If you’re using a unit they can’t heal and if they die multiple times they’ll gain multiple injuries meaning it’s better to give them a breather between missions. The other thing about this is that it forces you to switch up your play style and try different combinations which is a really fun way to play. 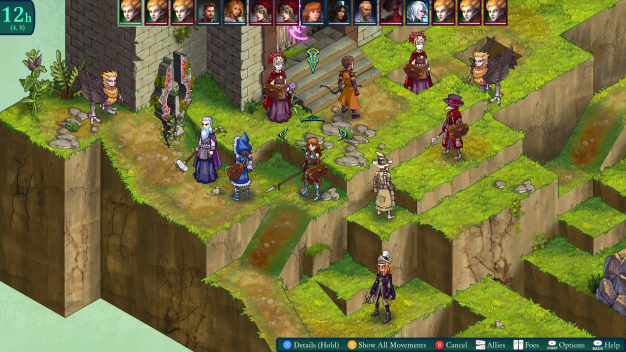 To give you a very brief overview of the story. A great evil, (there’s always a great evil,) was put to rest by seven adventurers. Shift time forward and these seven have become the immortals. Given unnatural power by their good deeds they are basically gods in human skin. The immortals were placed in guardianship of the world but because they couldn’t be everywhere they created the Arbiters to look after things for them.

The Arbiters are judge, jury and executioner. There is no law higher than them but they aren’t infallible and this has left a problem. Arbiter groups are becoming open to corruption and because they don’t need to answer to anybody but the council of immortals they are getting away with murder. 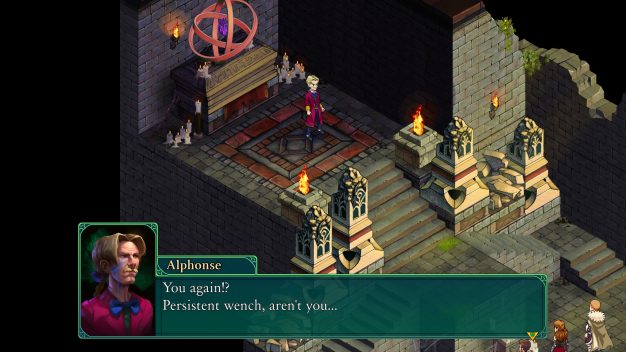 This is an RPG so story is everything.

On the up-side the Arbiter captain you’re playing has a decent set of morals and when she witnesses a murder she intervenes. The murderer is a pretty scummy nobleman called Alphonse and being a pretty scummy nobleman he believes he’s above the law and everybody that doesn’t have his level of upbringing. To make things worse he escapes a warm cozy dungeon by becoming a marked. Eventually an immortal basically decides they’ve been in the job to long and need to step down.

Each other member of the council names a marked and that individual has to go on a pilgrimage to prove their worth. When on this journey they are only touchable by other marked meaning your band of Arbiter’s are initially unable to recapture a killer. This doesn’t stop you going after him or ending up becoming marked yourself and the story spins from there. There’s lots of intrigue and it’s all very well written. Alphonse is a really nasty piece of work but he’s a puppet, it’s about working out whose pulling the strings. 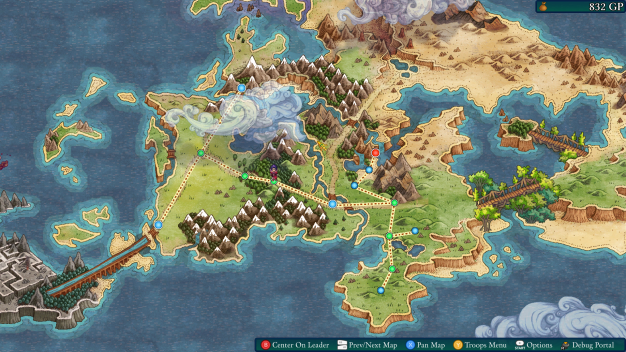 You’ll be wanting to accustom yourself with this. You can go back and replay levels when you want.

This title controls relatively easily when you know what you’re doing. The fact that you’re using a gamepad makes navigation and movement a doddle which is great. The camera angles are not so great. Either I haven’t found a way to pan around the maps or a free roam doesn’t exist but when you can’t see where everything you’re facing is one would be very appreciated. Similarly the ability to rotate the map would come in handy too. You can’t always see enemies when they’re standing behind things and although not a big issue is a bit of a pain when you’re planning.

I know I was using XCOM as and example earlier but to be honest this title has the look and feel of Shining Force one of my favorite games from the Megadrive era. The 16-bit look they’ve gone for brings back a lot of happy memories of playing that game and is very fitting for the style so thumbs up there. The sound is fine. You all know by now I don’t pay attention to music so I never really score it. Like I’ve said before, if it isn’t annoying me it’s doing it’s job and I’m happy with that. 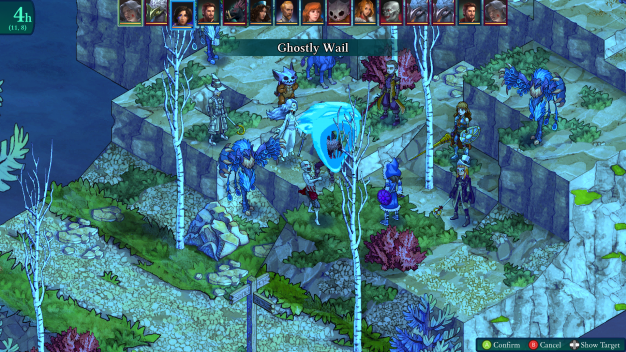 The maps are as varied as your enemies.

This is my sort of game. I always preferred turn based to real time strategy as I like to have a minute to think. If you’ve never played a tactics game but like things like chess definitely give Fell Seal: Arbiters Mark a go. Apart from a fairly limited tutorial and slightly unusual mechanics in places there really isn’t a lot to complain about. This is a game that takes a lot of brain power and strategic thinking. If you like your action fast an furious this might not be the game for you. It’s an RPG so for those of you that don’t want a lot of reading and storytelling this might also be a miss. I’m enjoying myself enough to want to complete the game, something that’s going to take a while, and I know I always use this as a yardstick but I think it’s important. The simple fact that I want to keep playing means it’s a win in my book and definitely worth a try for the strategy and RPG lovers amongst you.