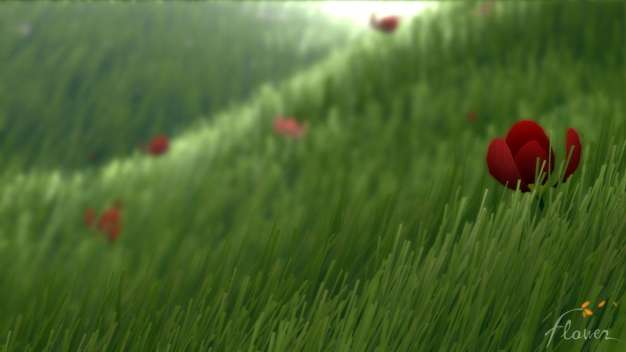 Flower is the latest effort from thatgamecompany. The developer is also behind flOw, one of first and most successful games on the PlayStation Network. Flower was released on PSN for the standard price of $9.99. This artsy title joins the likes of Linger in Shadows and Tori-Emaki by bringing a unique premise and original gameplay to PSN. Flower has been described as an interactive poem that evokes emotion from players who experience it. Like most poems, the levels in Flower range from gentile, peaceful environments to utterly depressing landscapes. Players are left with a brilliant example of a game that doesn’t have to be difficult or overly suggestive to leave an impression.

Players take control of the wind in Flower as they cruise around various locations. Stages start off with a flower that sheds a single petal upon pressing any button on the PS3 controller. Any button can be used to whisk the petal along while the sixaxis controls the direction. The PS3 has seen some shoddy implementation of the sixaxis input, but after honing their craft in flOw, thatgamecompany has once again done a wonderful job at making it seamless and enjoyable. You won’t even want to use the analog sticks to control the wind. The object of Flower is to guide the wind towards flowers in order to send them into full bloom. Each blossomed flower releases a petal which joins the original petal throughout the level. There are so many flowers to blossom, players will end up with a seemingly endless trail of colorful petals by the time the level ends. Collecting these petals causes groups of flowers to appear on screen. Running into those flowers usually ends with an explosion of greenery in a specific area. Do this enough times and eventually the level will come to an end.

The spirit of Flower wants nothing more than for the player to delve into a beautiful world where they don’t have to worry about rushing due to time restrictions or enemies constantly on the prowl. The first stages of Flower are serene enough to play through without thinking, but the latter stages are more objective based. While still not timed, players may find themselves concentrating on completing a specific task instead of taking in the scenery and relaxing. While this contributes to the depth Flower certainly provides, it also hurts the sit back and relax promise that the game makes. That doesn’t mean these objectives aren’t fun to go through. The final stage of the game has many moments in which the player can affect the landscape directly, but it’s not required to complete the level. We would have liked to see more stages follow this example as it was clearly the best of the bunch. 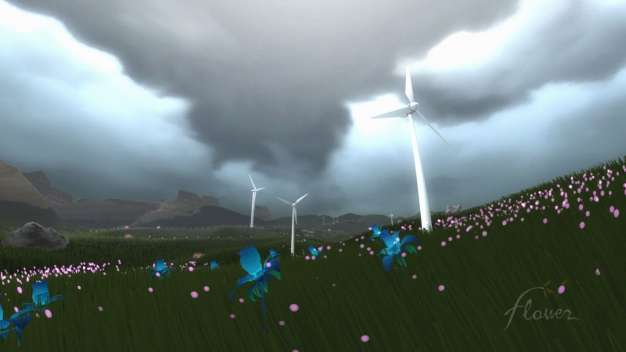 The visuals and music of Flower are stunning. Flower can be played in full 1080p HD resolution and the quality definitely shows. Images from the game prior to release mostly showed rolling green hills and blue skies, but Flower offers much more than that. Players will experience night stages, rain and windmills to mention a few. The music seamlessly looms in the background and makes its presence felt at appropriate moments. Players can also create separate musical notes whenever a flower petal is collected. Finding a straight line of flowers and hitting every one in succession really helps the soundtrack shine. Flower is easily one of the best looking and sounding games on the PlayStation Network.

Flower is a must buy downloadable title on PSN. While the style may not be for everyone, no one can deny the beauty and originality the game represents. Flower can be completed in a couple hours and the replay value is somewhat limited. If you want to collect all the Trophies (there’s some secret ones too) Flower will have to be played more than once. Then again, players would want to play Flower again just to see the visuals a second time.