As the last of winter slowly slips through Australia’s fingers, you can find me here, on my couch, shivering through game after game of the new PS4 port of deck-builder Frost. A deck-building, solo survival card game, Frost is set in a harsh, frozen world that is ravaged by a lethal, seemingly malicious storm, the Frost. It was originally released on iOS and Android (and it shows) in 2016; along with a PC release, it’s now arrived on Playstation 4 and Xbox One.

In Frost, you are one of the nomads who, for generations upon generations, has traveled the frozen wastes to reach the Refuge, a haven away from the Frost’s icy presence. Frost requires you to undertake resource management, develop strategies and use your memory to manage different events and threats as you guide your fellow survivors through the ice and snow. Warning: what follow next is a somewhat in-depth explanation of card mechanics.

You start with a screen like the one below, which shows your hand (you can tilt the screen down to see your discard pile as well), your stock (the categories of cards and how many you have of each in your deck), idea cards, the items required to progress in this area, the event for that turn, and other features such as the scouting/foraging ability and your nomad’s current health status (he starts with four points). In the top left corner, you can see the countdown to the Frost catching up with you. Every game begins with the Frost counter at 8, which is the maximum. Below the Frost countdown, the game displays the number of days that you have been traveling (which is mostly irrelevant) and the distance to the refuge (i.e. number of turns remaining until victory). 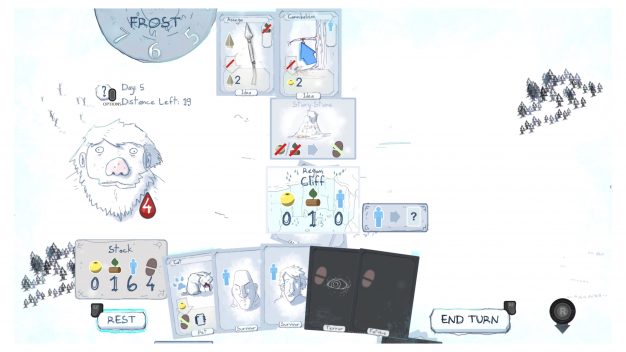 You cannot make progress towards the Refuge unless you have completed the requirements for that area (i.e. spending two survivors, one food, three materials towards the area). If you have been unable to raise the resources for this area, you can choose to rest and replace your entire hand (only if you haven’t played any cards out of your hand in this turn), which allows the Frost to advance by one. You can also forfeit your turn and be given a new hand (regardless of how many cards you have already spent or have left), which also advances the Frost by one. Once the Frost meter falls below one, it’s “game over.”

Basic cards have three categories: materials (represented by a log), food (represented by a yellow…fruit?), and survivors (represented by some seriously ugly individuals). Idea cards, which are in the top middle section of the screen, appear with each turn (with an upper limit of five at any given time) and offer advanced cards with different effects. Idea cards have a price (i.e. two food and one material) which can be contributed to over the course of multiple turns. Once bought, the idea card is added to your hand and, depending on the card, can either be used immediately (i.e. a spear on an event such as a hungry wolf or vicious cannibals) or further cards in your hand can be spent on the idea card to use its activation effect (i.e. spending a survivor on an Extractor item to produce new food cards). 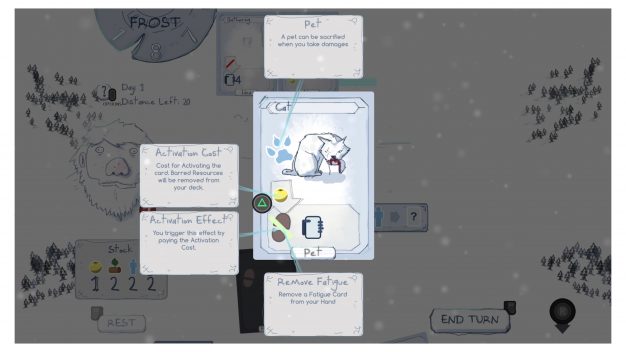 If a dangerous event (i.e. wolves, cannibals) are not dealt with before traveling, you will have to decide to deal one damage to the survivor you are controlling, or to one of the survivors or pets in your next hand. Survivors in your hand can also be used to forage, which can result in a new food or material card being added to your hand, another survivor being found, or the sudden death of your survivor.

In addition to the previously-mentioned cards, there are also fatigue and terror cards. Fatigue cards fill your hand and can overrun your deck. Except in special circumstances, they cannot be spent, and only certain other cards can remove them, as can the act of resting. Terror cards are advanced forms of fatigue cards. If you have three terror cards in your hand at once, you lose the game. Survivors who are out foraging can also bring back fatigue cards, which is like…c’mon, guys. That’s not helpful. 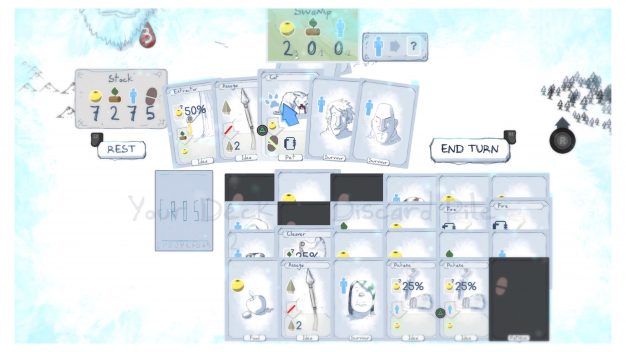 There are other types of cards and concepts which I haven’t covered here; these are better learned through playing than by reading in a review. The basic takeaway for Frost is that you have to keep one step ahead of the storm while fending off enemies and fatigue, biding your time until the distance between you and the Refuge runs out.

I’ve seen reviews and summaries of Frost praising its design and music. I have to say that while the premise for this particular deck building card game is actually quite interesting, the art style for the human characters is just awful. This could be completely subjective, but while I don’t expect absolute supermodels to be battling the icy tundra on a daily basis, the designs for the nomads are just so, so ugly. 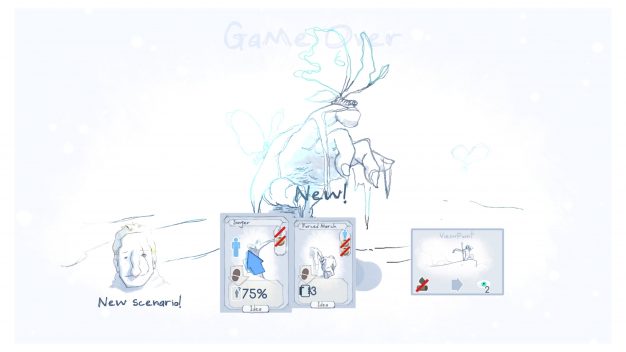 The game is pretty stark white, as well, which I don’t mind but I could see how it could bother other people. Thankfully, the devs have offered a night mode! Brilliant, right? Hell no, it’s just inverted colors and it is godawful to look at when actually trying to play the game. Bad move, guys, that is not what a night mode should be at all.

As for the music, I can really see what the developers were trying to do here. The low chanting in the opening story movie and menu screen, the desolate, fairly scarce music that accompanies every aching step through the snow. The idea was great, but the execution was poor. The ambience is just repetitive and dull. It’s not so much that it’s unbearable to play with, it’s just that you end up blocking it out, which isn’t what you want as a reaction to your game’s musical score. 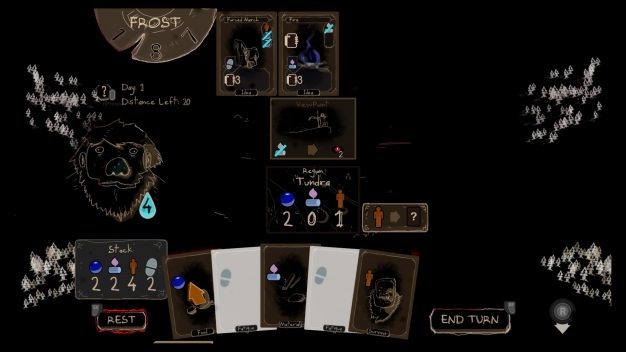 While some aspects of the tutorial are a bit confusing (it took me a little while to understand how some of the activation effects are actually supposed to work), the gameplay of Frost is really, really good. I have almost nothing but praise to give. The premise, while simple, makes the act of playing something as potentially monotonous as a deck builder legitimately tense and interesting.

I didn’t cover it too much in the body of the review, but you do sometimes have to make hard choices. For example, if you resort to cannibalism to obtain multiple food cards, the design appears as bloodied meat, reminding you of what you did. The game handles the reminders of your transgressions in this subtle, but chilling way that is quite impressive for a game built around card management. 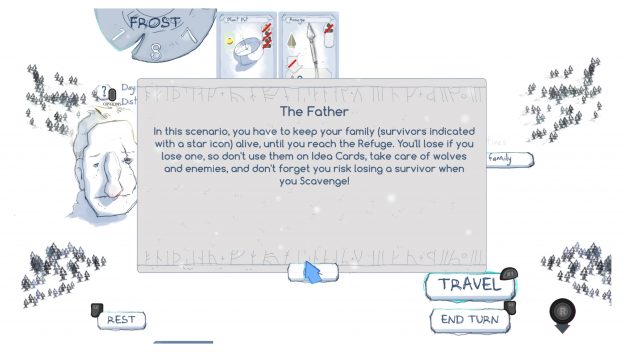 Would I recommend Frost? Absolutely, but with a recommendation – get it on a portable device. I’m not one to promote mobile gaming at all, but if you don’t have a Switch or a laptop you can play it on while on the move, even a phone version would be acceptable.

I’m not saying that it was bad on the big screen – far from it (although it was abundantly clear that my TV was bigger than Frost was programmed to be, as certain effects cut out at very clearly defined edges a few centimetres away from the actual edge of the screen). I just think that this is the kind of game that would be more engaging to play continuously on public transport or on a plane, rather than as a console game proper. 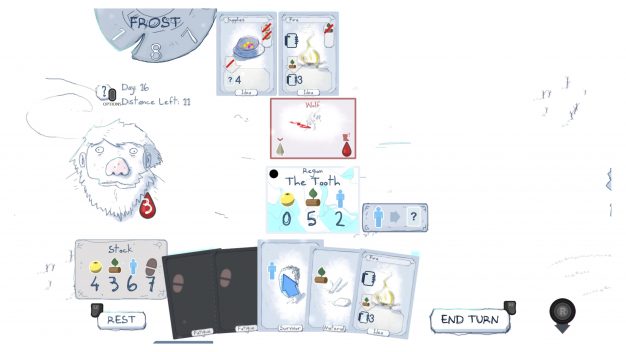 If you can get past the ugly design and unfortunate music, Frost is a solid deck building game that will make you so tense that you may lose your cool. Apart from the main game (which features various difficulty modes), there is also an endless mode, and special scenarios that put certain restrictions and rules onto a regular game of Frost, offering new and interesting ways to play. Frost is out now on Playstation 4 and Xbox One, and can also be found on Android and iOS mobile platforms, as well as PC.

Frost is genuinely a solid game and was the perfect introduction to deck building games for me, but I guarantee it would be a good addition to any seasoned player’s game library as well.