According to my massive app library of more than 1,264 games, my mobile phone has become my go-to gaming platform. But even though it’s my most played, it’s not my most preferred. Swiping or flicking a touch screen just can’t compare to the feeling of mashing physical buttons, which satisfies something deep within my “lizard brain.” Thankfully, the makers of the Gamevice have heard our collective subconscious’ sibilant hiss, making a gamepad that promises to transform your iOS device into the “most powerful gaming handheld in the world” by giving it the most legit handheld game console controls. 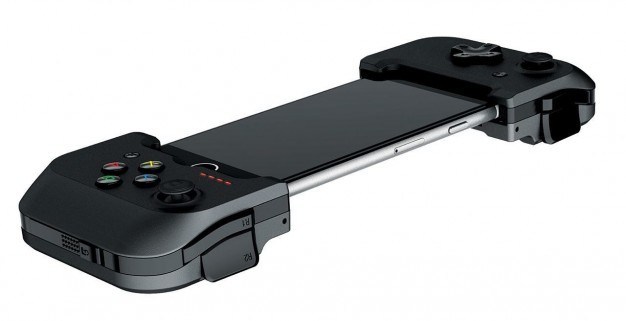 The Gamevice – with versions for iPad air, iPad mini and iPhone 6/6+/6s/6s+ (reviewed) – is basically a fully-fledged controller sliced in half Solomon-style and slapped on either end of your iPhone, turning it into a Stretch Armstrong-ed version of a PS Vita. Though it looks a little goofy, less so with the larger 6+/6s+, it’s still more elegant than clipping or balancing the phone above the gamepad. Combining the controller and control-ee into a single unit is a much preferred solution to the “where to prop the phone?” dilemma, even if the result doesn’t look seamless. A few minutes into a gaming session and it won’t matter, because it feels seamless.

To setup the Gamevice, you simply plug your caseless iPhone into the right side, which houses a built-in Lightning connector, secure the left side, adjust the strap to fit, and lock the slider in place. Boom! Handheld game console. Because it physically attaches to your iPhone, you don’t have to deal with the pairing and battery issues associated with Bluetooth based gamepads. In addition to being easy to setup, the Gamevice is easy to use, with a layout familiar to any gamer of the past 20 years. It has a d-pad, four face buttons, two analog sticks, two triggers, two bumpers, and a pause button. There’s also a battery check button; pressing it lights up four LEDs that let you know approximately how much juice you have left before you need to recharge.  It’s kind of a drag that it isn’t powered by the phone itself, but on the plus side, you can charge it without removing your iPhone thanks to a micro USB port next to the headphone jack.

Speaking of the Gamevice’s headphone jack, it uses a built-in digital-to-analog converter for sound output. What does this mean? Instead of your iPhone processing audio though its DAC chip for output to the headphone jack, it sends the sound as a digital signal through the Lightning connection to the Gamevice’s DAC chip. The problem is that the Gamevice’s DAC chip is garbage. It’s not so bad with games, particularly ones with chiptune style soundtracks. But if you want to listen to music, a podcast, or an audiobook while playing a game, prepare for an auditory assault of stuttering, static and distortion. It’s not a huge deal for me, as I don’t plan to pair George R. R. Martin’s latest tome with a session of coin collecting in Sonic the Hedgehog 2, but it’s still worth mentioning.

As for the rest of the controls, they feel comfortable and responsive, with a just the right amount of resistance. The triggers and bumpers are nice and clicky. The face buttons have a good amount of give. And the d-pad rests in that perfect valley between being too stiff and too mushy. My only complaint, and it is unfortunately a big one, is with the analog sticks. And no, it isn’t that fact that they’ve put them on top, like some sort of evil mirror universe version of Sony’s handheld. While the motion is smooth, the sticks themselves feel cheap and thin. So thin, in fact, that the tapered edges are just shy of sharp. They really could have benefited from being thicker or rubberized. As is, the sticks feel like they’ll be the first thing to break. 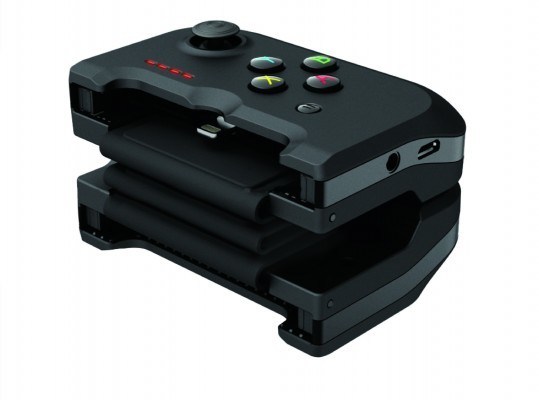 This really made me bemoan the lack of an included carrying case or bag; though the overall construction seems solid enough – which should be a given for an asking price of $99 – I did worry more about chucking the Gamevice in my computer bag than any of my SteelSeries, Moga or 8Bitdo gamepads. But the soft strap connecting the Gamevice’s two halves folds up easily, letting hidden magnets in the back of both halves do the work of keeping it bundled up. I wish the magnets were a little stronger, as my computer bag is a bit of a Thunderdome – one giant pocket where gadget-on-gadget violence runs rampant and unchecked – but they do the job of turning the otherwise ungainly Gamevice into a compact little brick.

But even more important than portability is playability. When it comes to games, there are quite a few Gamevice-compatible titles available on the App Store, with more being added every day; but where this gamepad really shines is with console-to-mobile ports like Star Wars: Knights of the Old Republic, Oddworld: Stranger’s Wrath and the Grand Theft Auto and LEGO series, which were originally designed with a traditional dedicated controller in mind. It’s not a must, but the free and frequently updated Gamevice Live app will help you hunt down compatible games as they are released, organizing them into categories which include new, featured, free, paid and a Steam-esque breakdown by genre. New additions to Gamevice’s ever growing library are also curated on the website which, like the companion app, will link you directly to the App Store where you can then download your game of choice.

While a little too plastic-y to pass as an Apple product, you can tell the Gamevice‘s makers have tried to channel Apple’s aesthetic. In doing so, they’ve created a solid, sleek gamepad that delivers a genuine handheld console experience for the iPhone. On the downside, they may have followed too closely in Mr. Jobs’ footsteps. At almost one hundred dollars, it’s more expensive than most other MFi controllers on the market. And as it’s tied to the current and previous iPhone models, it’s got a (potentially) shorter lifespan than other controllers. But if money and the future are of little concern to you, the Gamevice is the best shell-style gamepad you can get.

The best, but also the priciest, gamepad for mobile

If you can look past its cheap sticks, steep price and potentially limited lifespan – the bane of any iPhone generation-specific accessory – then you’ll see that the Gamevice is a solid piece of tech that unites device and accessory into a single, surprisingly comfortable handheld gaming console.