I’ve reviewed quite a few roguelikes in my time, and my response to them is usually the same: the constant repetition and grind just isn’t worth it. It would take a lot to get me to happily repeat the same battles and locations over and over. It would take something beyond a compelling gameplay loop; I would need to care about the characters and understand them. And it wouldn’t hurt for the subject matter to be something that already interests me, like maybe Greek mythology? Yes, if I were to describe my ideal roguelike, it would probably look a lot like Supergiant Games’ Hades, which recently had its final release after almost two years in Early Access. Join me in the underworld, and I’ll break down what makes this title so special. 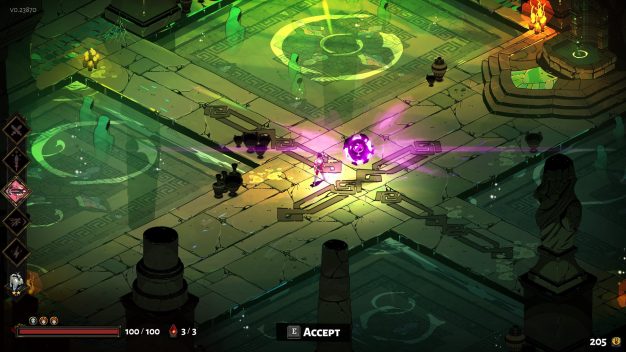 Right off the bat, all of your typical roguelike staples are here. You can choose from multiple weapons as you traverse through procedurally-generated chambers, collecting various things to help you reach the end. If you die, you have to start back from the very beginning. Before we go into what makes Hades different, I should start by noting that the combat is very satisfying. Each weapon works differently, and even later into the game, there are enough weaker enemies that it’s really satisfying to smash or shoot your way through them. Enemy health is easy to track, so I have a much easier time understanding how effective my attack strategy is than I would in a game where that information got lost or wasn’t shown in the first place. As for other staples of the genre, there’s one currency for buying items to help on the current run, another for buying permanent upgrades between runs, special things that upgrade your weapons, etc. That’s another issue I have with most roguelikes: it’s hard to keep track of all that. But I never once had that issue in Hades. Maybe that’s because the purposes of these items are explained narratively by the characters, and there’s even a backstory for each one, which you uncover as you collect more and more of them. The most powerful single-run resources are boons from the gods, of course; these give Zagreus new abilities and a chance to converse with his relatives. 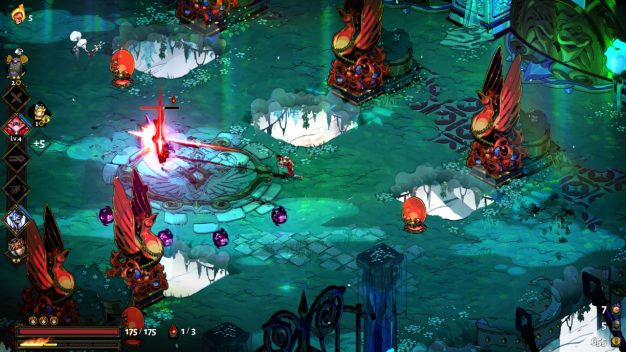 And this, of course, leads us right into the main reason that Hades stands out from the pack: its characters and storytelling. To begin with, there’s the player character, Zagreus. He’s a young man with a gentle heart, but a rough exterior; he’s trying to escape from his father’s realm so he can finally meet his real mother. He’s as sympathetic as a character can be; while the gods don’t always have the purest motives (as per the source material), Zagreus is impossible to dislike. As for the aforementioned gods, they’re more complex than they seem at first glance. For example, while all of the Olympian gods speak highly of Zagreus and seem very happy about him coming to Olympus, they’ll still attack him if you choose one of them over the other for boons, and it doesn’t seem like their kindness and generosity really applies to mortals. You’ll learn more about each of them over time, and a lot of the conversations are genuinely entertaining in their own right. One of my personal favorite characters is Hypnos, the embodiment of sleep, who comments after each run about whatever enemy or trap ended up killing you. He’s an odd one, but I’m always happy to talk to him. And it isn’t just gods; there are also mortals you’ll meet in the underworld, with their own personalities and stories. 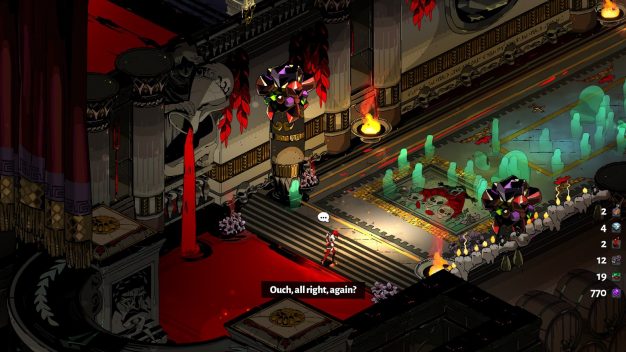 Granted, for me, no matter how well a game is written, it’s hard to get into it if it looks bad. Fortunately, Hades looks amazing. The underworld is surprisingly colorful, with a bold style that stands out among the pixelated flock. Each section has a distinct style, and the designs of the characters and enemies complement this. The portraits of the characters are meticulously drawn, and the design expertly captures the nature and majesty of the gods. Hades is one of the best-looking games I’ve ever seen, and the fact that it’s the last feature I’m mentioning here should tell you how good everything else is, too. 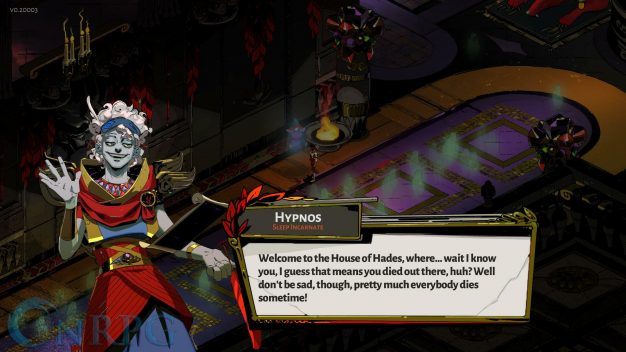 If you follow my reviews, you know I wouldn’t usually recommend a title like this. And granted, I am biased as a fan of Greek mythology. Still, I have to agree with the critical consensus this time. You should absolutely give Hades a try, no matter how you feel about the genre. No doubt you had already heard good things before the release, thanks to its time in Early Access. The visuals, and the writing are simply beautiful, and while there is some of the typical roguelike grind here, you can also alleviate some of that by turning God Mode on and off at any time. Rather than punishing the player for using “easy mode,” or not including it at all, Hades provides it as an option with no judgment. So there’s really no reason for anyone not to give it a try. Trust me, even if the roguelike style turns you away, there’s more than enough here to make up for that.