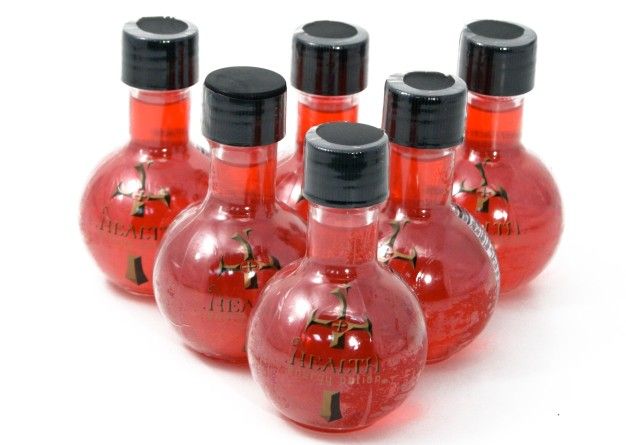 A wise man once said, “Fool me once, shame on you… you fool me, you can’t get fooled again.”

Months ago, I put my mouth in the electric chair when I tried Mana Energy Potion. It was ultimately a bad decision resulting in attic mouth and no effects to lift my spirits or any sort of anything related to magic use. As luck would have it, the dark alchemists responsible for crafting the blue nightmare figured their Mana needed an unholy companion and thus, Health Energy Potion (HEP) was born.

Due to my previous experience in drinking liquids of color that should not be, when the opportunity arose to try out HEP, I jumped at the chance not to, but was told to shut up and take it. So I did. But this time, I wasn’t alone and recruited some people I could afford to lose as friends. Find out who’s still alive after the jump. 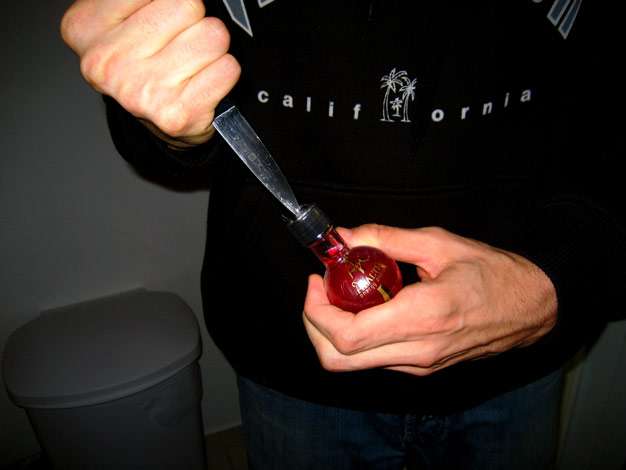 To start things off, opening a bottle of HEP proved to be a challenge that bare hands and teeth weren’t enough to tackle. We had to get a knife. Knives are dangerous. Perhaps we should’ve taken the ironclad plastic as a sign to stop what we were doing and step away; like those movies where the stupid teenagers know trouble is afoot but go looking for it anyways. Suffice to say, we went looking for trouble…and we found it.

Back in high school chemistry class, I remember the teacher telling us to never smell anything directly, instead wafting vapors towards our noses with our hands, because the last thing you want is a face full of noxious fumes. If only I could remember these nuggets of wisdom at proper moments and execute them effectively. Alas, it was not meant to be as we all went whole hog in sticking the bottle up our nostrils. 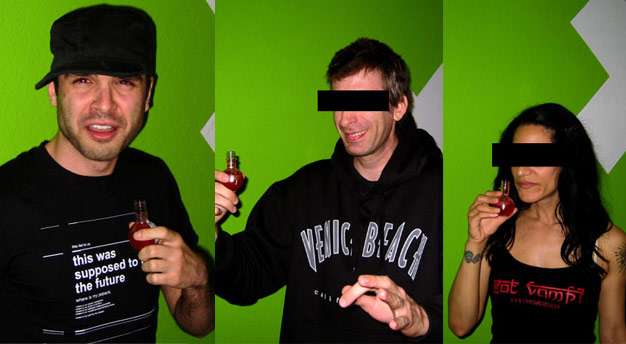 HEP does not smell pleasant. It’s tough to describe, but falls somewhere in the “fermented” section of the spectrum. I’m not going to be an over dramatic Nancy and say it’s enough to make one gag, but it’s strong enough to make face muscles pull an Ernest. Think about when you pee and don’t flush, but you add some syrup and cough medicine to the mix and you’re in the right ballpark. Now that we had dipped our lower halves into the pool, so to speak, there was no sense in sissying around anymore. Time to drink up — fortune favors the bold, as they say. 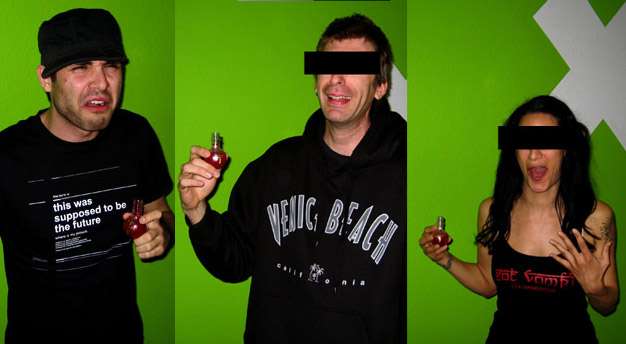 Wrong. And whomever said that first is a jerk face that needs to be punched in the crotch. HEP tastes disgusting. It’s supposed to have a “smooth” apple-cinnamon flavor, but I’ll be damned if I can taste anything resembling such lies. There’s a strange, semi-sweet taste similar to a diet drink with a little bit of a sour edge that just doesn’t fit right, and it sticks with you like a twisted reminder of your ill deeds. It’s like Tussin (the ghetto CVS version of Robitussen) gone wrong, but nothing like basement. After the initial taste the other two quit and refused to be part of my experiment while I soldiered on to the finish — this is the point in the RPG when your party dies. I realize people don’t go after energy drinks looking for a tantalizing bouquet with subtle notes and finishes (I enjoy the taste of Red Bull, btw) and until I start having my pretentious energy drink and cheese parties, this may never be the case. So, with 1.69 fl. oz. of red hell in my stomach it was time to sit around and wait for the magical effects.

I got tired. Really tired. I figured I’d sit down and try to suffer through Killzone 2, but even under the influence of HEP I couldn’t encourage myself to do so. Basically the rest of the night was me on the couch doing nothing and deciding to go to bed early…with a stomach ache. HEP made my tummy hurt and it was too late to call my mom so she could make me feel better. Look what it did to my friend and cat! 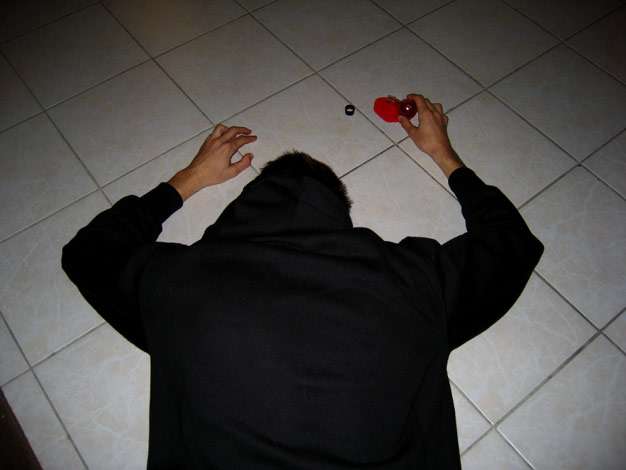 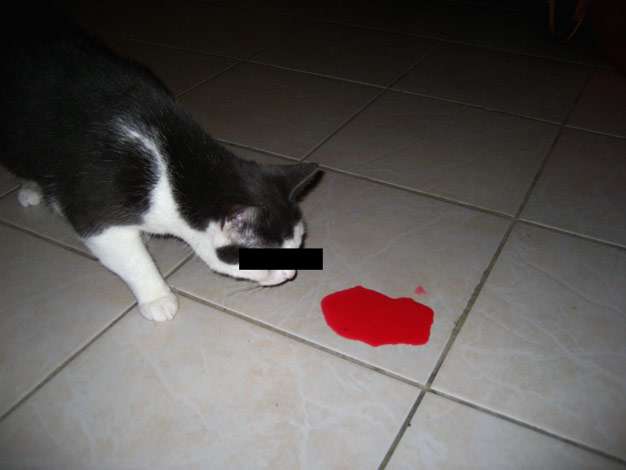 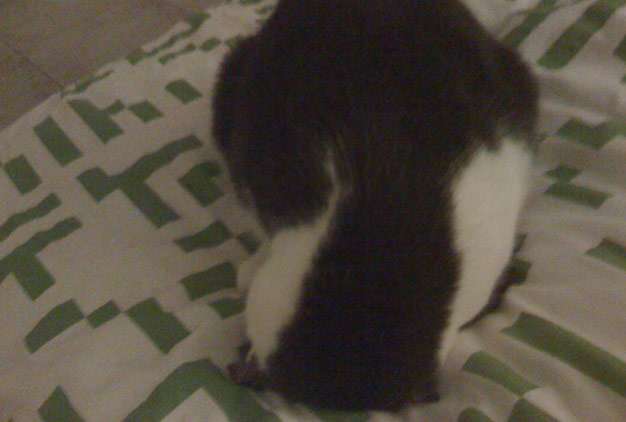 Ok, so maybe things didn’t happen exactly like that, but I absolutely have to tell you to stay away from Health Energy Potion. It smelled gross, it tasted gross, had no noticeable effects on my person (I’m more than sure I operated it correctly too, so don’t call me out on not finishing it) and it’s expensive at almost $4 a pop. My advice is to keep drinking Mountain Dew like it’s going out of style and, should HEP come into your possession, exercise caution and practice proper disposal methods. 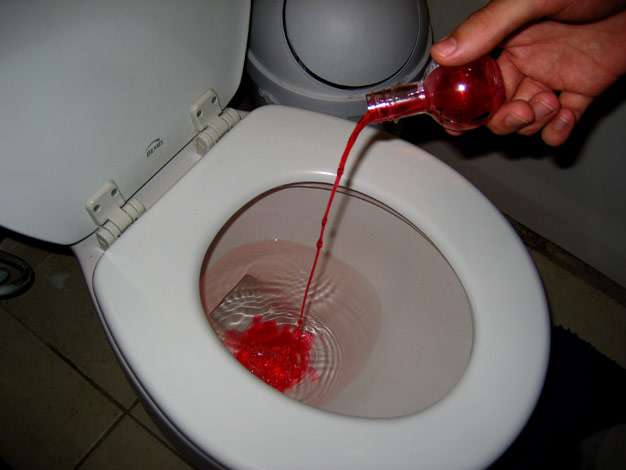