I think it’s safe to say that as gamers, we go through spells of playing games from similar genres. This isn’t always a deliberate or even conscious thing, it’s just something that happens. I’m not saying we don’t all have our favorite genres (because we do), but sometimes you get side tracked into something that turns into a real adventure. I’m finding this at the moment with story-driven games. Although I love a title with a good plot it isn’t necessarily the first thing I look for. Games like Firewatch and They’ve all gone to the Rapture aren’t my first choice because they go too heavy on the story at the expense of the player’s agency. I find the same problem with visual novels; there has to be something beyond good storytelling to motivate me to play. This aside I’ve plunged down the rabbit hole of point and click adventures recently and I’m not a bit sorry for it. This little journey has led me to the game we’ll be looking at today. It’s called Heaven’s Vault and I have a few mixed feelings about it.

In Heaven’s Vault you take the role of an archeologist called Myari who goes off to find a missing roboticist, taking her newly acquired robot with her. The plot starts with a very simple premise and branches depending on the choices you make. I’ll explain this in a bit more depth in a minute, but you actually uncover the story through the clues you discover and people you meet.

This is a game about delving into history and it’s all really interesting. My only note here is that it can be a bit slow going to begin with and I found this game a tad difficult to get into at first. I think I would have liked a bit more back story at the start to ground me but that’s my only real complaint on this. 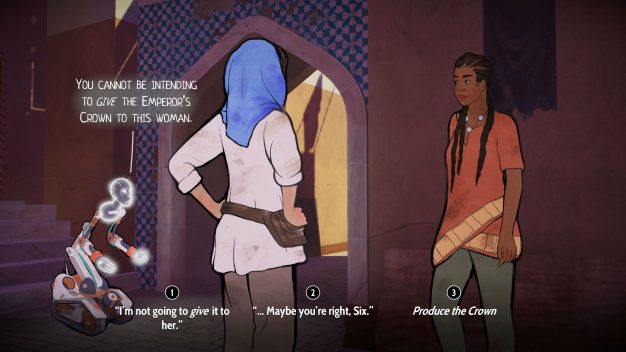 The choices you make feel important to the story.

As I’ve just stated, uncovering clues is at the core of Heaven’s Vault. There is a really clever, innovative gameplay mechanic where you find inscriptions on a bunch of different items in the game. As an archeologist you have a basic knowledge of the ancient language but a lot of what you decipher is based on educated guess work. As you find more inscriptions the words you have already guessed will either be proven wrong or noted as correct. As these symbols appear throughout all of the inscriptions you have collected they get easier to understand as you go.

Your original guesses never seem completely ridiculous either. Myari will reason with what you have chosen and explain why your phrase could be correct, even if it isn’t. New inscriptions and items that you find also open up new areas of exploration on the map. This is true of archeology, it’s all about following a historic trail. This gives more basis to what you’re doing and makes your character’s career feel real and not just like a throw-away element of the story. 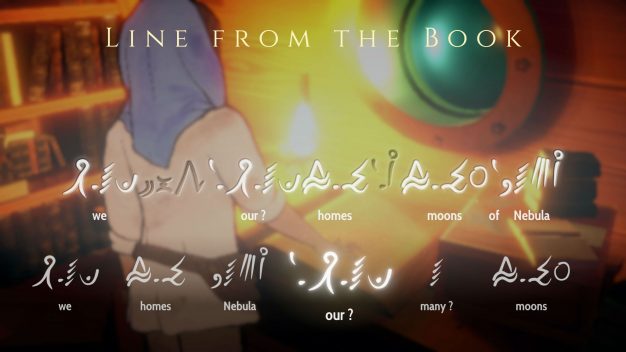 The inscription system is both clever and integral.

Following from this you also add to an evolving timeline each time you make a discovery, find a new site or interact with a new person. The steps on this timeline aren’t just save points in the game they form an evolving web of actions and discoveries that you can view at any time. You can see your actions having consequence and this is really cool.

Graphically this game is stunning. The art concept is great and follows a painted water colour-like theme which has been placed over a fully rendered 3D world. The 3D elements of the game I love, the 2D overlay not so much. When your character is moving it feels a bit stilted. It’s like watching pictures sliding over a background instead of moving against it. That isn’t to say that I don’t like the art style, everything is really well painted I just don’t really like the two artistic choices together so much. 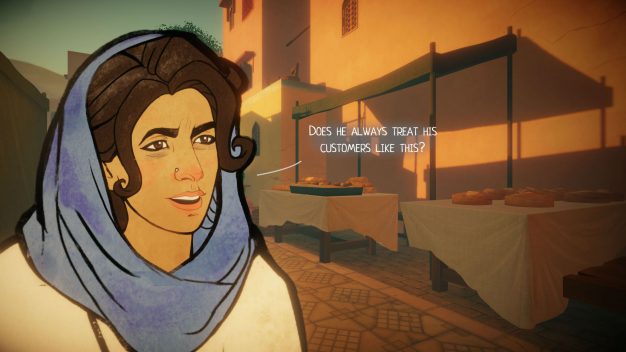 Something that spoiled things a bit for me, and this is something I know the devs are working to improve, was a slightly wonky camera. Sometimes you find yourself having a conversation with a character that you can’t see because they’re off screen. In addition to this movement sometimes feels a bit awkward. I think many of you have played the first Resident Evil game. The best way I can describe it is a being a bit like that. Movement doesn’t always feel fluid and this isn’t going to do anything for the overall experience.

Parts of Heaven’s Vault are narrated but the majority of dialogue is written. The issue I take here is that most of the time you’re moving about in silence and this makes some of the spoken pieces of dialogue feel a little bit out of place. There’s nothing wrong with the voice acting but I’d rather they’d gone for a written or spoken format, not bits of both. This is an artistic choice on behalf of the developers and that’s fine, it just not something that works so well for me personally. 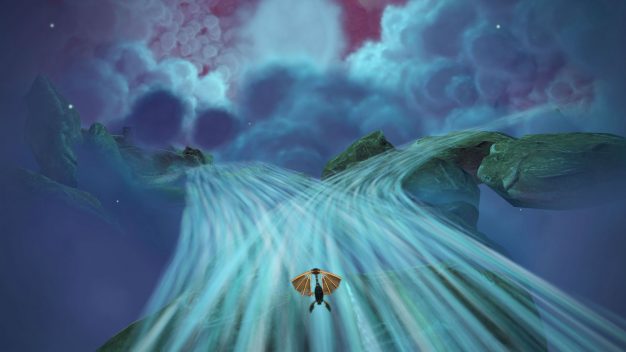 This is a genuinely beautiful way to travel.

The way you move between areas of the gameworld is really clever and gorgeously created. You travel by ship on intertwining streams of rushing water. These streams are effectively in space and this gives a really interesting take on travel between places which are vast distances apart. It’s via these rivers that you find new ruins and other previously undiscovered sites that appear as you collect artifacts and decipher inscriptions. These travel elements of the game can come off as a little long winded, not that this was a problem for me personally as it’s so gorgeously done. With this being said a fast travel option has been added for journeys between places you’ve already found for speed and ease of play.

Heaven’s Vault grows on you as you progress. I was really unsure during my first hour or so of gameplay as to whether I wanted to continue with the experience. I have to admit that I’m glad I did and that now I want to see all this game has to offer. Players that want to be hooked immediately or aren’t as patient as me when it comes to pace may not give this game enough of a chance. Now I’m a decent way in I can honestly say this would be unfair but as I nearly did exactly the same, (shame on me,) I can understand why it could happen. 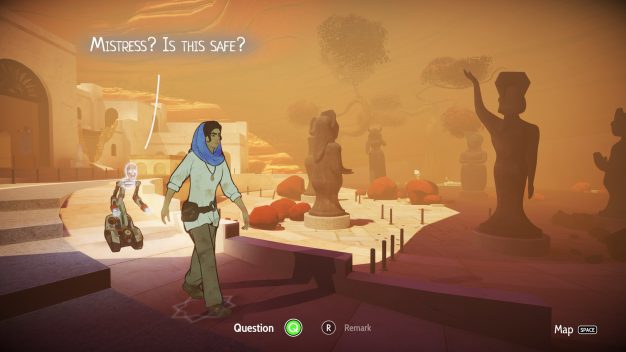 This game should appeal to a lot of people. It’s part point and click adventure, part visual novel, part puzzler and it’s a really nice mix. This is also the sort of game that I feel you’ll need to play more than once to get the most out of.

I’d like to see what difference making other choices would make to the story. This is great as well, it gives this game longevity and replayability and that’s something I think is commendable. Whether Heaven’s Vault has multiple endings remains to be seen but there is definitely scope for the story to veer off down several different paths on a fresh start. 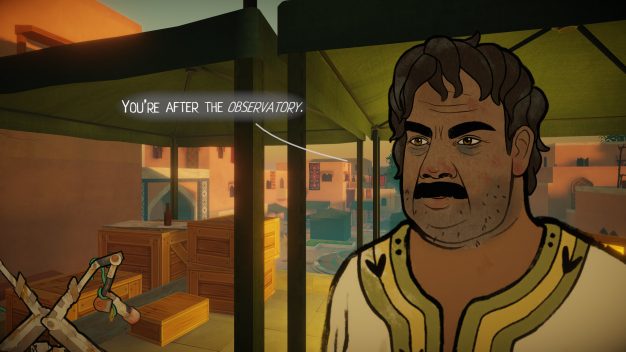 There are one or two things too many that I’m not sure about to give Heaven’s Vault a really high score. Please note that a lot of my reservations are based on personal choice as opposed to anything technical or game breaking. This is still a very sold, playable game it’s just not a ten out of ten blockbuster for me. If you like the art style and don’t mind the relatively slow pace I think you’ll have a lot of fun here. If you want something fast moving and action packed then I would advise looking elsewhere.