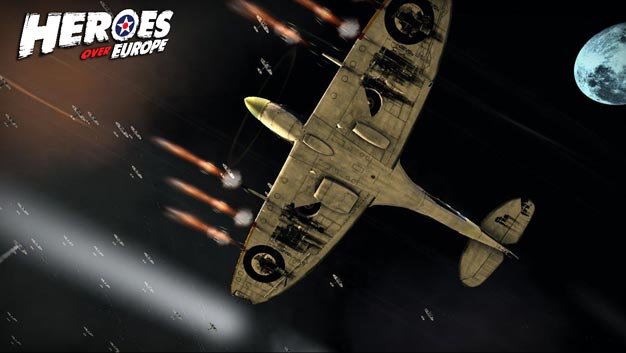 Heroes Over Europe offers a vision of World War II filtered through old British comic books, patriotic wartime posters and chirpy Pathe newsreels about ‘our boys.’ It’s a welcoming approach, a presentational style that accounts for much of the game’s strength. But the ‘chocks away’ charm wears away all too quickly. What’s left is a game with a real dearth of ideas.

The sequel to 2005’s Heroes Over the Pacific, HOE transplants the air-based arcade action to a rough approximation of the Battle of Britain. So you’ll be zooming over London defending the houses of Parliament, dispatching vast squadrons of bombers and dog-fighting ‘ace pilots’ over the white cliffs of Dover. All in the name of seeing off those dastardly Nazi chaps.

The game’s central gimmick is the addition of ‘Ace-Kills,’ a feature best described as the air-combat equivalent of bullet-time. Get in close to an enemy and a gauge on your targeting reticule will charge, keep them in your sights for long enough it will eventually turn red – allowing you to click a button, zoom in and pick off vulnerable sections of enemy plane. Think of it as an air-to-air headshot. 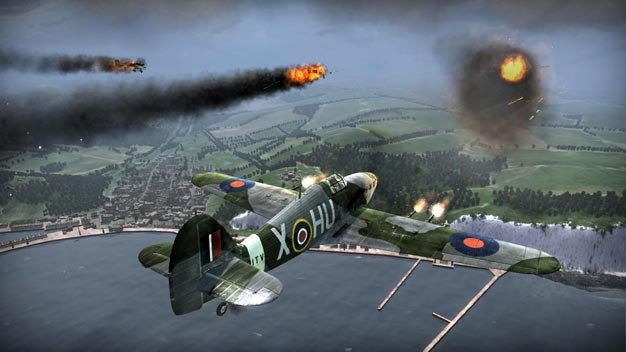 But Ace-Kills are just too fiddly to bother executing. The standard targeting scheme is so forgiving and deadly from such a range that aside from some achievement and mission-based incentives, Ace-Kills are likely to go unused.

So with even this barely-unique feature rendered all but useless, Heroes Over Europe struggles to differentiate itself. It’s not helped by the mission design, which is dull, repetitive and uninspired. Rarely do they deviate beyond throwing ever larger squadrons of bombers and fighters at you. When they do, you’ll have to contend with the odd escort mission or low-altitude escape, but they fail to raise the experience beyond mediocre.

It’s short and easy too, with an unchallenging 5 or 6 hour campaign that offers little or no depth. Once you’ve worked out the best way to tackle bombers, you’ve essentially learned everything you need to beat the game. From a full-price retail product, it’s an embarrassingly slight package that a barren-lobbied multiplayer is ill-equipt to counter.

There is the nucleus of a good game here. Throwing your plane around the skies is liberating, thanks largely to the arcade-esque rejection of annoyances like stalling or running out of ammo. Coupled with a charming presentational style of instructional loading-screen propaganda posters and some nicely done animated comic cut-scenes, for half an hour or so you could be convinced that HOE was going to be a deeply-unfashionable, yet highly-enjoyable guilty pleasure. Unfortunately, in that half an hour you’ve seen pretty much all the game has to offer. 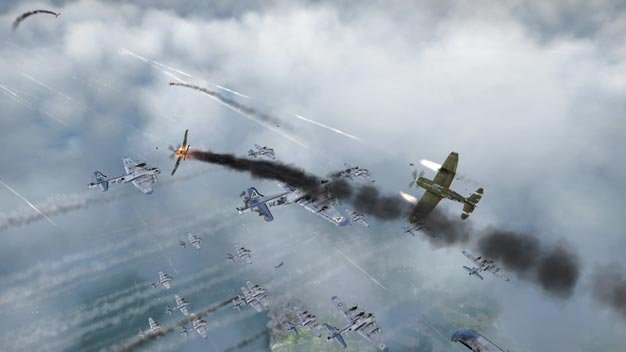 It’s hard to escape the feeling that Heroes Over Europe was rushed out of the door with little or no love. It’s gets the very basics right, establishing presentational and gameplay styles that compliment each other nicely, but then fails to build on them. This is a game utterly bereft of inspiration or innovation, a cold exercise that ticks the boxes of what makes a game, but overlooks those that make a good one.We’d struggle to recommend it for any more than an evening’s rental.

– …because it is just so short and easy
– Mission design is uninspired, repetitive
– Crushingly familiar