For every mediocre game released by a big budget studio, there are dozens of independent gaming gems that languish in obscurity, all for want of a bigger advertising budget. Make that any advertising budget. Sure, they might garner some critical and consumer acclaim, but they aren’t ever going to grab as much media coverage as the umpteenth Call of Duty release. That leaves it up to you – the intrepid gamer – to sift through the debris of sequels and reboots, like an old-fashioned prospector, for something precious. Or, you could just leave the hard work to IndieBox, who take the gems of the indie gaming industry and polish them to a diamond bright shine with AAA extras, packaging and presentation. 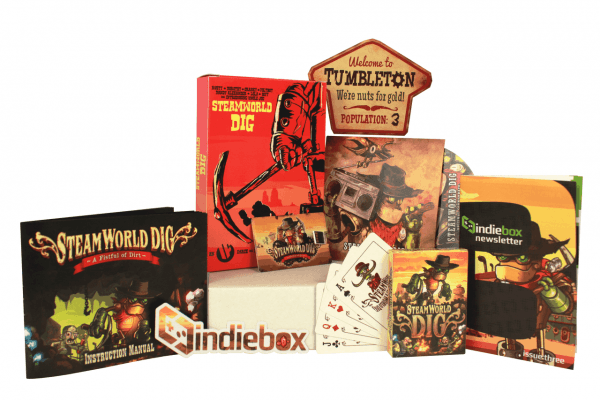 IndieBox is a subscription service that will send the best indie games from around the world, re-packaged in a collector’s edition box, right to your door each month. Each IndieBox includes a retro-style game box, USB game cartridge, color instruction manual, original soundtrack and other collector’s items – like buttons, keychains, stickers, posters and quirky little papercraft projects – related to that month’s featured game, which are always Windows, Mac and Linux compatible. The service starts at $19.99 + shipping ($4 for United States, $9 for Canada and $14 for international) for a recurring 1-month subscription, which you can cancel at anytime. Of course, if you lock into a longer commitment, like a 3-month ($17.99/mo + shipping) or 6-month ($15.99/mo + shipping) subscription, you save some scratch. You can also purchase copies of previous IndieBoxes for $24.99 + shipping while supplies last. Honestly though, I don’t see why you wouldn’t “put a ring on it” for the longest commitment period possible, short of death do you part. Read the rest of the review if you want, but I’m going to go ahead and spoil it by telling you that this is an absolute must-have for anyone even remotely interested in video games. 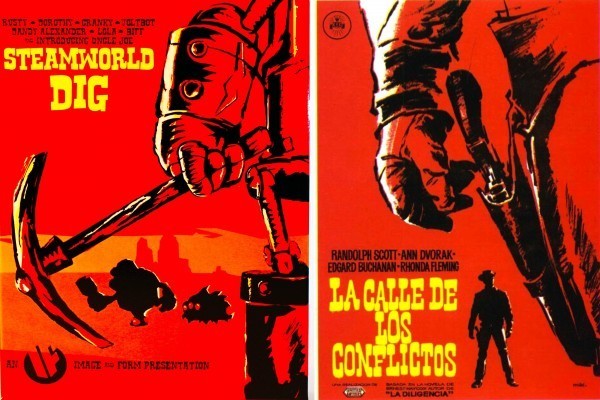 A lot of subscription services focus on what’s in the box rather than on the box itself, but not IndieBox. This is the first time many of these games have made the transition from the virtual to the physical world, and IndieBox makes sure to treat them like the most envied débutante at the cotillion down to each little ribbon and sequin. The box is sturdy, glossy, and chock full of fun little details; in addition to listing the system specs, players, and controller support on the back, the text beneath the fake barcode reads YOUSTRUCKGOLD. As for the art, it’s a pitch perfect parody of the Spanish poster art for the classic spaghetti western, Abilene Town. 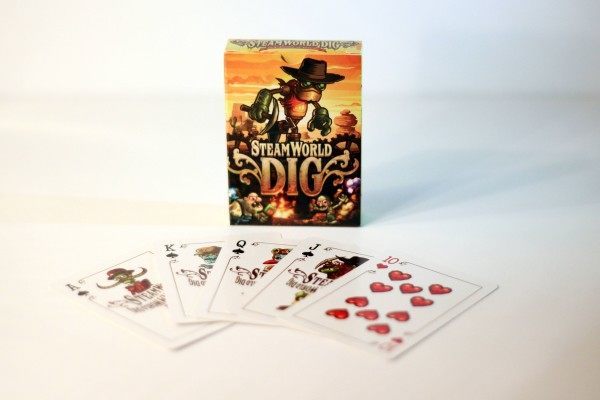 It came as no surprise that the same attention to detail and design that went into the game box was evident in this playing card box. But I was shocked that, instead of a standard deck, it contained 52 SteamWorld Dig-themed playing cards. The number cards have pixelated precious gems! The face cards have characters from the game! The  snozberries taste like snozberries! 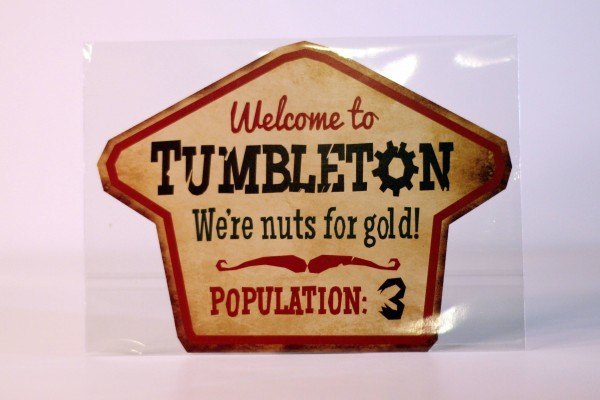 The tourism board of Tumbleton went all out with this welcome sign, which is made out of a thin but sturdy sheet of metal. It’s a really nice collectible, one you could proudly display on your desk, shelf or – with a touch of double sided tape – wall above your computer. Something about this disturbs me though. Seeing as this sign is made of metal and the steam-powered robots residing in Tumbleton are made of metal, is this the equivalent of a human town’s welcome sign being made of skin? No wonder your population tops out at three! I’m going to put a magnet on the back, slap in on my fridge, and avoid inviting any robots over. 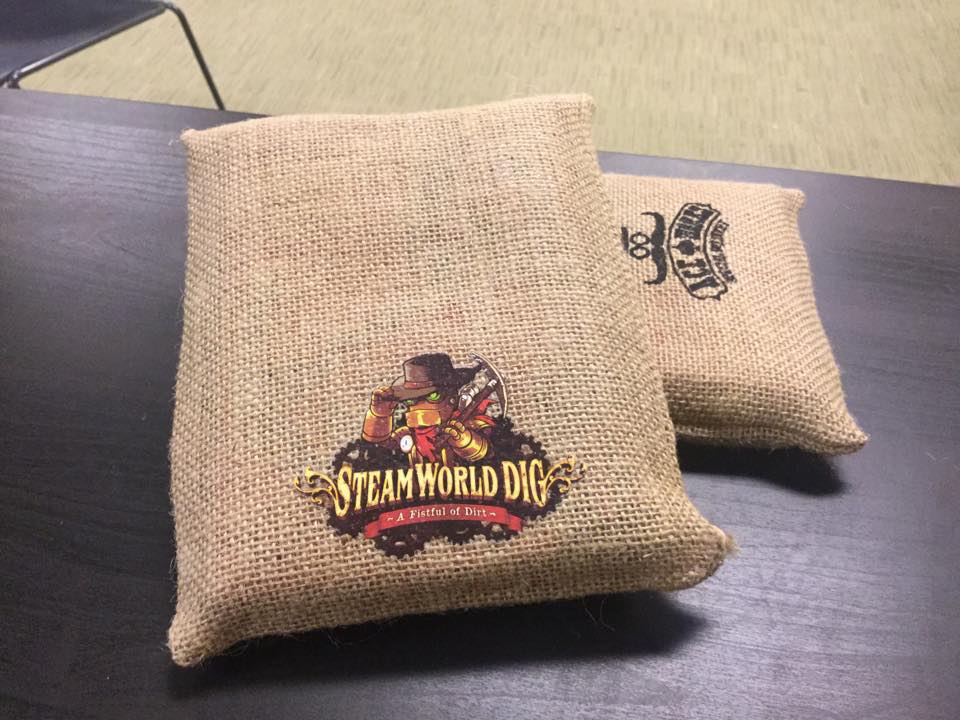 This item wasn’t actually included in the review box, but that’s only because there was an issue in the factory delaying delivery, meaning IndieBox had to decide to either delay shipping or ship without the pouches so subscribers still got their boxes on time.  They wisely chose not to keep their customers waiting. They also chose not to keep them in the dark, sending out an e-mail letting them know the issue. Anyone who received SteamWorld Dig will get their Gargantuan Pouch in their next box. And anyone who unsubscribed before December’s box, but got November’s, will have it mailed directly to them. 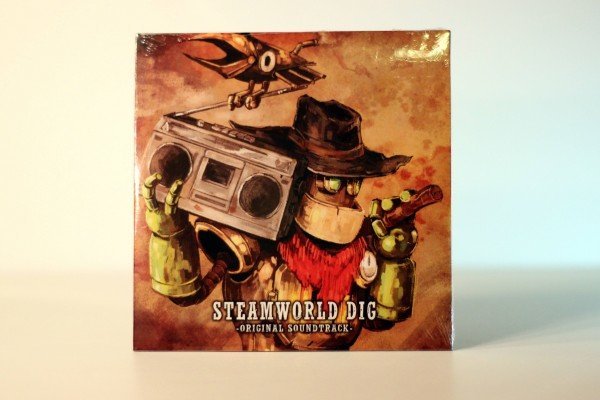 Barring my bordering on creepy love of Ellen McLain‘s rendition of Still Alive, I’m usually not one for listening to music from a game, outside the context of playing the game. But SteamWorld Dig‘s soundtrack, by San Diego-based band Steam Powered Giraffe, is actually pretty awesome. Led by twin siblings David Michael Bennett and Isabella “Bunny” Bennett, Steam Powered Giraffe are the perfect choice – they perform in character as steampunk musical automatons, each with their own elaborate backstory. There’s even a fictional timeline on the band’s website chronicling the band’s supposed “appearances” throughout the years at such notable places as the 1933 Chicago World’s Fair and The Ed Sullivan Show. 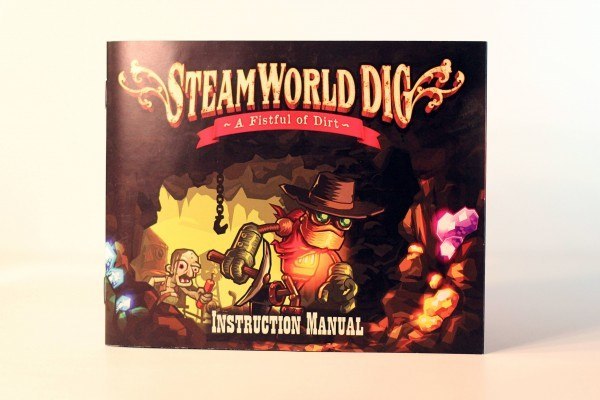 You millennials won’t remember, but there was once a time when games came with instruction manuals, lovingly crafted tomes filled with a wealth of interesting information, from controller layouts to gameplay guidelines to detailed descriptions of the characters. These days, you’ll be lucky if you get an ad for another game. IndieBox brings back this lost artform, including a yesteryear-inspired full-color instruction manual that will bring a nostalgic tear to the eye of any gamer over 30-years-old.

All this and a game, too! It looks like a credit card, but it’s actually a USB cartridge containing a DRM-free copy of the game on Windows, Mac and Linux. Because Santa finally got all my letters asking for a way to replace my credit cards with something that would take my mind off my crippling credit card debt. The cartridge is really sturdy, with slightly beveled edges and artwork printed on both sides, so it looks good coming and going…just like me. *BOW CHICA BOW WOW*

IndieBox as a service caters to collectors. Case in point: for those preferring to add the still-sealed box to their collection of video game memorabilia, they provide a Steam key when available so you can can have your cake and eat it too. Take note GLaDOS! It’s a considerate concession, showing the company cares about getting the game into the hands of gamers above all else, but IndieBox as a product begs to be opened. 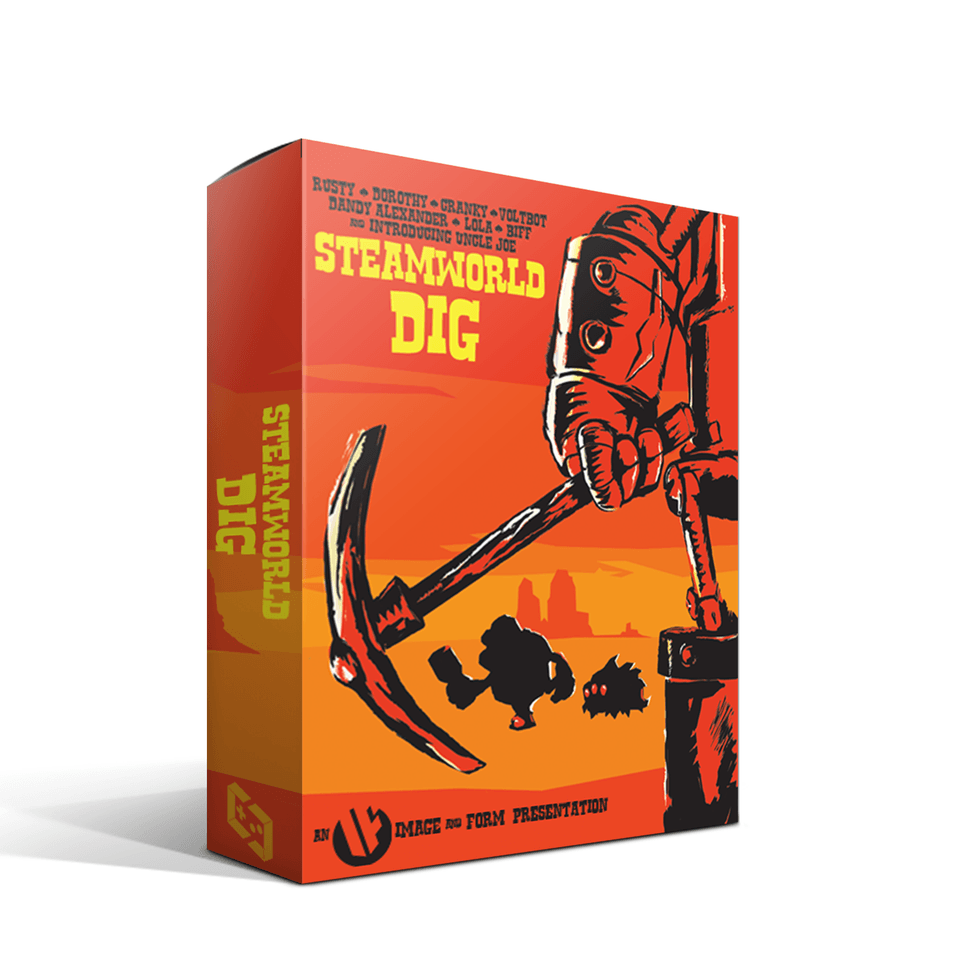 Unlike a video game-themed subscription box, which usually contains 50% things you like and 50% crap you don’t,  IndieBox is 100% about the game. Each month’s selection must have scored 75 or better on Steam and/or a rating of 8.0 or better on IndieDB to even be considered. So you know you’re getting a good game. And all of the games featured to date – Teslagrad, Escape Goat 2, Forced, MouseCraft, Luftrausers, Brutal Legend and Steamworld Dig – cost $9.99 to $14.99 for a Steam key alone. So you know you’re getting a good deal. Top it off with a handful of high-quality extras with direct ties to the game, and you’re simply getting. My only complaint is that I only have 5 stars to give it, because IndieBox truly is worth every blazing ball of gas in the heavens.

December’s game will be Rogue Legacy, which I’m allowed to tell you because, as of December, IndieBox has moved from a mystery based service into an open one in which the game of the month will now be announced during the first week. Subscribe before December 18th at 11:59 PM EST to guarantee your copy of Rogue Legacy. It’s the best early Christmas gift you could give yourself.

This carefully curated assortment of indie game goodies would be a steal at twice the price!