Kraven Manor is an award winning point-and-click horror exploration game with a lot of potential, what with the spooky setting and even spookier Weeping Angel-inspired antagonist. It’s a shame it didn’t follow through with a compelling story. Kraven Manor has you ask a lot of questions but rarely gives you any answers, leaving you feeling disconnected from the game and from your character. 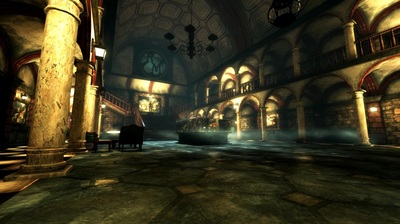 Here is what you see when you first enter the manor.

When you begin, you have the choice to choose between two difficulties, regular and nightmare. The only difference between the two is that enemies hit harder in nightmare mode and the flashlight you use can die. Your flashlight dying is bad. When the light goes out, it gives enemies the opportunity to hurt you. I started off in nightmare mode because I’m manly like that, but ended up switching to regular mode after recharging my flashlight every 20 seconds got annoying.

After selecting a difficulty, you start the game by entering Kraven Manor, a massive, creepy, abandoned mansion, during a dark and stormy night. Creative, right?  Why are you there, however? I have no idea. The game’s story is left up for interpretation. The only plot device I had that gave me any information was a journal I could scribble notes in. Random photographs and news clipping laying around the manor however, eventually allow you to connect the dots that something dark and evil has happened at Kraven Manor.  I  assume that I must be on a mission to find out what, but that’s all I got: an assumption. You just start the game by walking into Kraven Manor. That’s it. I had no motivation to explore the manor. I didn’t know what I was looking for, or even if I was looking for anything at all. I didn’t know what caused me to visit the manor in the first place (let alone on a dark and stormy night). Nothing. Kraven Manor desperately needed to give gamers SOMETHING to build from in terms of plot, rather than drop them in a scary location, with no knowledge or motivation. It sounds like the plot of a Saw movie, except even the characters from a Saw movie would know better than to enter this place of their own free will. 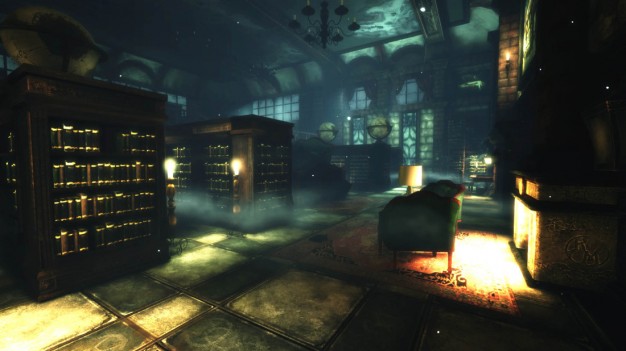 This is the creepy library, complete with hidden corridors and sliding bookshelves…if you can find them.

Visually, the game is gorgeous. Kraven Manor uses the Unreal Engine to its fullest to make a truly dark and eerie atmosphere. From flashes of lightning through windows, to the somber glow of a fire place, to tiny bits of broken glass from a lamp that shattered; All were expertly implemented touches, adding to a subtle sense of dread. In horror exploration games such as this, the details really are everything. Gamers want to feel like they are exploring a real haunted house, with real details. Kraven Manor delivers in that regard.

As far as gameplay is concerned, Kraven Manor played out predictably. Explore different rooms, find objects and clues, unlock more rooms, find more objects, etc. The only real twist is what attacks you during your time at the manor. At certain parts of the game you get assaulted by a creepy bronze statue. The only way to stop it from attacking is to…..look at it. You read that right. Creepy Statue functions just like Boos from the Mario series or the Weeping Angels from Dr. Who. They don’t move and look (kinda) harmless when you look at them. But if you turn your back, Creepy Statue advances on you very quickly, beating you with it’s cold, bronze hands. Creepy Statue makes several appearances and harasses you throughout the game. You eventually learn that Creepy Statue is housing some kind of wrathful spirit inside its bronze casing, hence it’s anger issues. This spirit wants  you out of the house. I would tell you why, but once again, the game doesn’t deliver. You never quite learn why the spirit is doing what its doing. 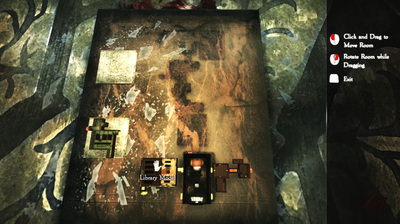 Putting model pieces of the manor together is how you expand the manor in order to explore new rooms.

Another issue I had with Kraven Manor  was how short it was. I beat the whole game in less than 45 minutes. Demon Wagon Studios, the game’s developer, is charging $9.99 for Kraven Manor. Ten dollars for a game this short and un-fulfilling is highway robbery. I don’t recommend picking it up. For those of you who are fans of the horror exploration genre, you may enjoy Kraven Manor out of sheer principle. But wait for it to go on sale first.

Watch trailers, get screenshots and more on the Kraven Manor official website or purchase it on Steam for $9.99.

Kraven Manor has won multiple awards, looks good and scary and starts off feeling great. In the end however, the plot (or lack there of) was unimaginative and predictable, with the “scariest” parts of the game feeling like a continuous round of red (flash)light, green (flash)light.