What is the first thing you think about when you’re pondering on your next hard-as-nails soulsike? I bet it’s that none of these games have enough Tetris-like elements to them right? No? No, me either actually but that is exactly where we’re going with Loot River. Here we aren’t just interested in the plethora of things looking to give us a really bad day but also the very ground we’re standing on. Does all of this sound absolutely batshit crazy? Yes, it does! Is it worth indulging in? Well that’s what I’m here for, isn’t it?

In Loot River sections of ground slot together and can be moved about like a giant jig-saw. If, the said jig-saw had lots of things on its pieces that were more than willing to murder you. The first question we need to answer, though, is whether this mechanic makes sense or does anything for the game. Actually, in a strategic sense, it definitely does. It’s important for getting from A to B too as only some floating platforms will fit through certain gaps in the map. It feels a little bit odd at first, but when you get used to how everything moves it’s quite a lot of fun. Most importantly it isn’t a gimmick. I hate those. Don’t sell a game on the basis of a mechanic that you’ll only meet in passing, that’s a bit of a con. No cons here, so we’re fine.

I think you can probably guess how being able to move the battleground about can be helpful. You’ll often find that platforms have a mix of enemies occupying them and some will be a lot tougher than others. It’s much easier to kill a tank-type enemy when you aren’t being swarmed by weaker enemies at the same time. With this in mind, if you can lure that tank onto the platform you’re standing on and break it away from the rest of the pack you’re going to make your life a lot easier. The downside to this is that if you aren’t quick or get mobbed before you can break off; you might end up on a much smaller platform surrounded by everything. This is bad, but that’s the chance you take. 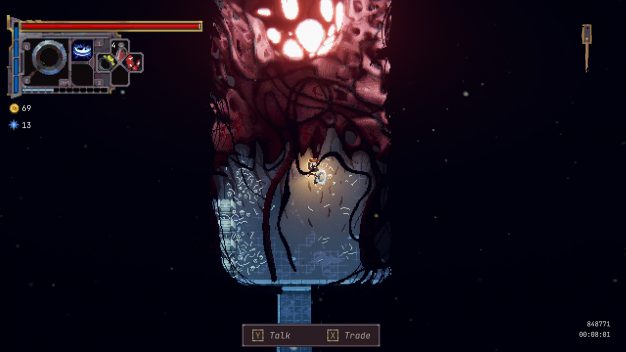 I just can never quite trust anything with tentacles. Especially when it’s telling me to trust it.

Loot River is a combination of soulslike and roguelike elements and, to be honest, I’m not sure either is working as well as they could be. This title definitely has a soulslike quality in its difficulty. Loot River is brutally unforgiving. A lot of the platforms you’re fighting on are small and if you’re up against something that’s heavy-hitting you don’t have a lot of maneuvering room. You can dodge and parry but as there is a lot going on all the time, I found myself swinging like an idiot and hoping for the best. What this leaves is an action game with soulslike qualities. I get the difficulty curve but that needs to be tempered and I’m not sure there’s enough balance there. Saying that this game isn’t what I’d call a true soulslike anyway so it’s not the end of the world.

The roguelike element of Loot River is definitely noticeable. The levels are procedurally generated so you never know quite what you’re getting. Saying this, the pool of enemies you’re facing isn’t massive. This means that you’ll face enemies in a different order and you’ll be up against differing amounts of the varying enemy types but when you’ve seen everything on a given level you’ve seen it. Don’t expect something new to suddenly appear and end your existence because you haven’t handled it before, this won’t be happening. At least not as far as I’ve seen in the several runs that I’ve completed. Loot is also randomized but this is something that’s worth noting all by itself. 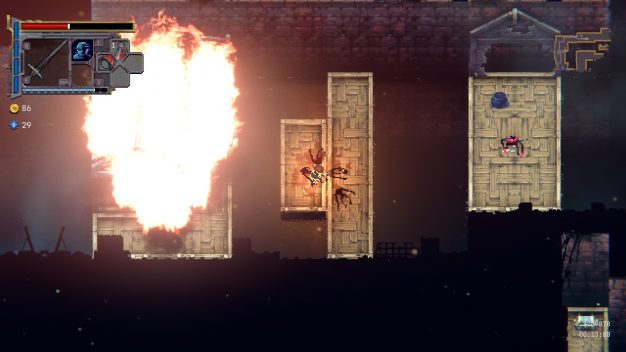 Fire is really bad for your enemies. The thing is, it isn’t very healthy for you either.

In Loot River you’d expect there to be a massive amount of items and other treasures to find and play with. Loot is one thing that’s sorely lacking in this title. You’ll find chests but these are few and far between. They don’t usually contain anything new either. You can unlock new weapons in the game’s hub world at the blacksmith. These are the weapons that appear in the game as you play. You’ll get some pretty cool modifiers added like fire or poison but you won’t find anything especially new in the chests. This makes it less Loot River and more, Collect What You’ve Already Seen River. That doesn’t sound as good, does it? This isn’t a massive moan because the gameplay is still fun but at the same time, it’s a bit of a letdown.

I have one very important piece of advice if you like your sanity. Do NOT play this game without a controller. I started by playing Loot River with keyboard controls and very nearly broke my own review doing it. The problem is you have two sets of movement controls doing different things and as gamers, our minds don’t work like that. WASD moves you and the arrows move the tiles. I died so many times because I was pushing the wrong buttons. Add to this that most of the other commands are placed around the WASD keys and you’re just asking for carpal tunnel. I tried again with a controller and all my problems were alleviated. This still isn’t great by the way. It’s only recently I bought a gaming controller for my PC, a lot of gamers probably still don’t have one, and, believe me, Loot River is virtually inaccessible otherwise. 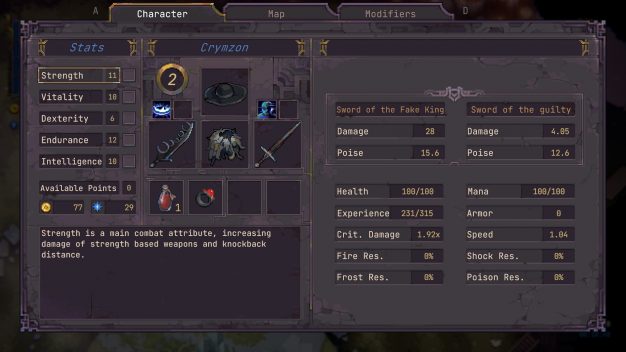 As with all these games, how you build your character is key.

In true roguelike fashion, you’re trying to run a whole game in one go so I’m not going to even pretend that I completed Loot River. I obviously haven’t. What I’ve played up to now has been fun and innovative though. As you meet more characters through exploring you’ll fall into the usual roguelike antics that we all expect. The souls-like edge this game has though gives it a different dimension of difficulty that might not be for everyone.

Nuts and bolts time then. Graphically, Loot River is reminiscent of the 90s top-down RPGs that I absolutely loved and the music and effects are fitting for the aesthetic. The characters aren’t particularly memorable and the story is just okay for me. It’s a narrative that builds as you go but to make this work in a game that’s different every time you really have to have a strong set of story markers. I’m not comparing but if you take something like Hades, bits of plot are unlocking every game so you stay hooked. Here I felt that there were long gaps where I really didn’t know what was going on. Loot River is a game that relies more on its action aspects so the story is less important but it’s also another factor that should keep you wanting to come back for more. This being said there’s less of a pull to keep going. 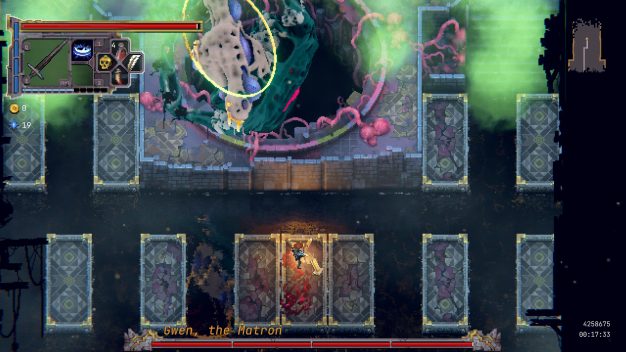 Can we guess what happened next? Spoiler alert. I started over.

All in all, we have a game that does everything pretty well. The difficulty is there for the masochists amongst you and there’s a lot of action to be had. As I said earlier this game needs a controller and I don’t think this is something that should ever really be mandatory for PC so there are a few points lost there. Equally the lack of diverse things to find can make Loot River feel a bit sparse at times. Saying this, there’s plenty of killing to be done and the tile movement mechanic is fun and different. I would say it’s slightly above average on most fronts so still worth a go, if you like roguelikes and if you’re a patient player.

Worth getting on board

A trip along the river

Loot River is above average on most fronts. Don’t expect miracles and make sure you have a gamepad in hand and you should have quite a lot of fun. An update would do wonders for the item count and enemy variation but these are things that aren’t game-breaking. All in all, a pretty decent effort.