There are various reasons why we pick up a title. These can range from the really thought-out ones like we’ve read a review and it’s ticking all the boxes, it’s a reboot of something we already know we love or all our friends are playing it; so why wouldn’t we, right? We also pick things up for far less thought-out reasons. We might like the art style or be looking for something that is just that bit different. In the case of the game we’ll be looking at today I got as far as “what the hell is a Maglam” and decided I needed to find out. The game is Maglam Lord and we’re about to see whether doing things entirely on a whim is a good way to go.

Maglam Lord is a Japanese title that is as much virtual novel as it is an action RPG. As a word of warning, it’s also entirely in Japanese with English subtitles. Personally, I don’t have any issues with this sort of thing in a game but if I was watching a movie I’d find subs distracting. I am obviously not everyone so if you’re the sort of player that prefers things in English, (or whatever language you speak,) or not at all you might get frustrated here. This doesn’t detract from the actual game but it’s still worth mentioning.

So, to give you a very tiny amount of plot, Maglam Lord will see you taking the role of the Demon Lord Killizerk, also known as the Bladelord, who was defeated in battle. Hundreds of years have passed since your loss and you wake up in the modern-day with only a vague memory of what happened to you. You quickly find that you’re not only an ancient demon but you’re also a relic. Fortunately, (or unfortunately for you depending on how you look at it,) being one of the last of anything makes you an endangered species and gives you protected status. This makes you part celebrity, part walking museum exhibition, and as with anything else that’s endangered you’re being “handled,” by the Administration. These are also one of the sources of your missions. You might be the last of your kind but the rampaging mutabeasts running about the place definitely aren’t the last of theirs. So to recap, you’re a relic stuck out of time with about as much self-autonomy as a fence post. So what’s a Maglam? Nothing to do with any of this, I’ll get there in a minute. 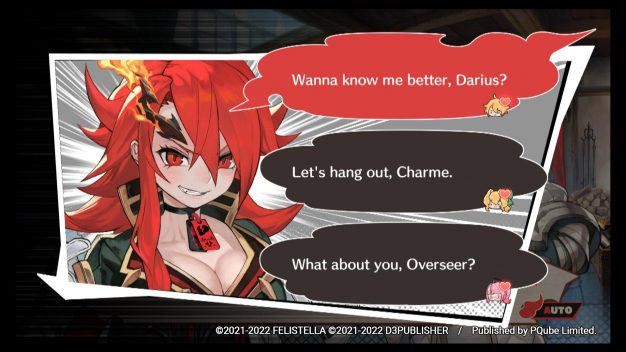 You choose how the story plays out

Maglams are a type of magical weapon. They can take the form of anything sharp and pointy but all of them have the power to kill gods and demons. With these opposing factions being the ultimate powers they can’t harm each other without breaking important celestial laws, therefore, in the hands of a member of one of these factions, a Maglam blade would be useless. This is where heroes come in. Heros are humans that are able to wield the blades and therefore kill very powerful entities. You don’t fit this narrative and this makes you really dangerous. As I’ve mentioned you are the Bladelord and the only demon lord in existence to be able to wield a Maglam to its full capability. On top of this, you have the power to become one. You can take the form of any blade that’s been forged and this is why you were put down in the first place, you were simply too dangerous to exist. That’s all history so no spoilers there. You can find out what happens to you by playing the game.

This is the sort of game that feels a little bit like a choose your own adventure. There is an awful lot of conversation going on and how you respond to the varying characters in the game will affect how the story continues. Personally, I don’t have an issue with this because I like a lot of unfolding plot in my games. If you’re the sort of gamer that skips through dialogue just to get to the juicy bits, you’re going to get very bored very quickly. The story is very much the heart and soul of the game. If you aren’t much of a reader or find large amounts of text tedious you might not have a massive amount of fun here. Of course, if you’re like me and really love to get into a character and follow a story in detail as it flows around you, you’re really going to enjoy this style of play. It helps that the narrative is funny and well written and the characters are different enough from each other to make them really stand out. I mean, you’re acquainted with a demon with a whole mini-dimension in his mouth. What’s not to love about that?! 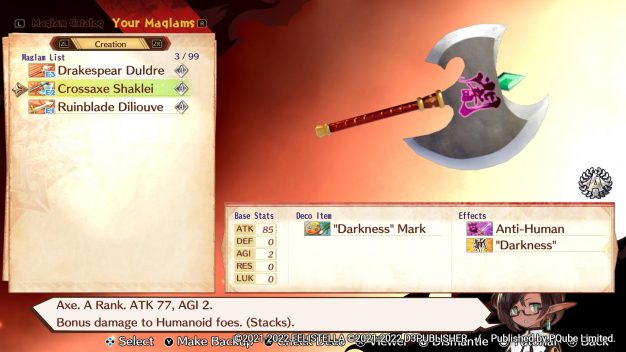 Weapon crafting is at the heart of the game

Graphically Maglam Lord is great. The art style, as with many things in the gaming strata is very subjective, so let me preface this. Graphically Maglam Lord is great if you like that very colorful Anime-Esque flair that comes with a lot of Japanese offerings. Personally, I do. The more story-driven elements are bright, fun, and very well drawn out so no complaints here. It sort of feels like you’re playing through a comic book which, for me at least, is absolutely no complaint. Combat, (I’ll come to this in a moment,) has quite an arcady feel to it. It’s a side-scrolling hack and slash and feels quite retro but, again, this is an aesthetic that I’m really quite fond of because it brings back loads of happy memories.

The other half of Maglam Lord sees you and your allies completing missions. There are lots of nasties roaming about the world that need putting down. Killing powerful monsters also helps Kilizerk regain their strength more quickly. They are still powerful but after all that time being unconscious they are only a shadow of what they once were. I can’t really go any further without spoilers but there’s a definite point to you doing what you’re doing. Having your own agenda fleshes you out as a character and adds more layers to the story so this is great. 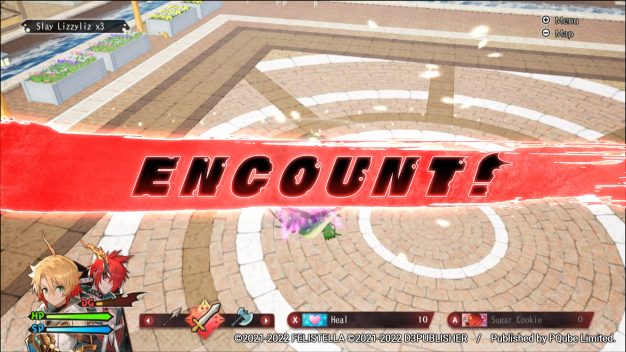 You will spend quite a bit of time roaming around the game world killing monsters of varying types. In true RPG fashion, there is a certain amount of grind but any good RPG fan will tell you that a bit of repetition goes a long way to not getting absolutely slaughtered later in the game. As I mentioned before, battles have a side-scrolling arcade action feel to them. The controls are simple and it all feels very fluid. Combat is enjoyable and really easy to learn. The only thing that takes a bit of getting used to is the need to switch weapons mid-battle. This isn’t a case of picking your favorite thing and going for it. You actually have to think about what you’re doing. You have three weapons on the go at all times. You’ll have a sword, an axe, and a spear. Each weapon type does greater damage to a particular enemy type. Don’t expect to only face one type of enemy per battle, you’ll have to think tactically. You need to be aware that just because you’re absolutely smashing one type of enemy, you’re only tickling his mates. I actually really like this but it was unusual when I first encountered it.

One of my favorite things about Maglam Lord is the way you acquire weapons. Put very simply, you don’t. You’ll have to farm ingredients from the world and then forge new weapons based on what you have. Weapons are graded. The higher the grade, the more ingredients it’s going to use in its creation. You want to keep making blades, not for the fact that they are necessarily more powerful than each other, (though an SS rank weapon will obviously be stronger than an A rank one,) but for what they can do. Each weapon has different base attributes. They might hit harder, or cause certain status defects. The more weapons you have at your disposal the more choice you have on the field. I really like the idea of having a lot of useful things that you can choose from, as opposed to running through big chunks of the game with one weapon because you like it until the next one you like incrementally better comes along. 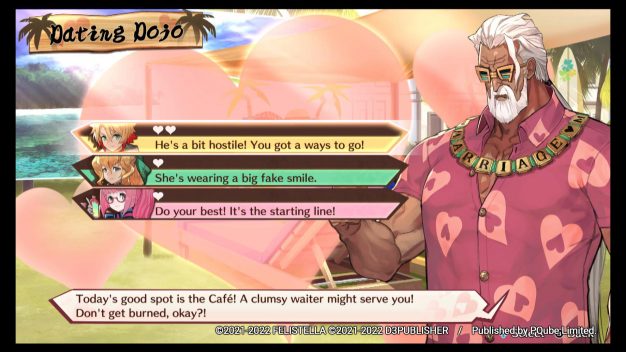 All in all, I’m becoming really rather fond of Maglam Lord. This isn’t a combination of gaming styles that I’m hugely familiar with but in this particular case, everything has been woven into something that keeps you coming back for more. It’s well thought out and I really don’t have too many complaints. If you don’t like heavy narrative steer clear from this one and the combat can feel a bit button bashy. Saying this, I don’t see that as a negative necessarily. It’s actually quite nice to see a bit of simplicity for a change. Those of you that like racking up big combos can still do that, it just feels a bit more rough and ready than some other titles that go for finesse.  Maglam Lord is a solid title that’s a lot of fun and one that I think could be relatively easy to skip over. I played out of curiosity and I’m very glad that I did. Now I also know what a Maglam is, so there’s that, too.

More fun than you can shake a sword at!

A good all rounder

Maglam Lord is doing a bunch of different things but it’s doing them all well. The story doesn’t suffer from the combat and vice versa. If you don’t like very heavy amounts of dialogue you’ll lose enjoyment here I think. If you’re wanting very deep combat mechanics the same is possibly going to apply. If, however, you’re happy with experiencing some enjoyable arcade fun with a deep storyline and enjoyable RPG elements I really think you need to go and find what I feel might end up being a hidden gem.