As a rule, the JRPG genre isn’t one of my favorites. I know some of you will be wanting to burn me at the stake right now but each to their own and generally, the ARPG is more suited to my style. I’m not saying one is better than the other as such, but rather that I prefer the game loop in ARPGs slightly better. None of this is to say, of course, that I’m never willing to prove myself wrong. Today’s attempt at me doing just this is with Metal Max Xeno Reborn, a JRPG battler that I’ve been indulging in on my PS4.

In Metal Max Xeno Reborn. You play a soldier that wakes up in a post-apocalyptic hellscape populated by a bunch of murderous robots, (and other less than friendly things,) and the few arguably unlucky survivors of a war that humanity lost. You must then go out and find allies against the metal menace and, of course, come out alive. The story isn’t the most innovative or original thing on the planet. It’s the building an AI to solve a problem only for it to determine that we’re the problem and decide to solve us instead trope. This is fine but as the plot goes things feel a little bit recycled. The entire game is also in Japanese with subs. It’s a JRPG so this isn’t a complaint as such but it’s worth mentioning if you’re not a massive fan of subtitles.

One thing I like about Metal Max Xeno Reborn is how the action in this title flows. There is an interesting mix of turn-based and real-time battles that keep things interesting and feeling real. One of the things I hate is not knowing when a battle is coming. I’m the sort of player that likes to explore every part of a map and find everything there is to discover. You get to a point where you’re tougher than most of the things that you’ll encounter in a given area, and you can only ever grind so much until it loses its effect.

With this in mind, it’s nice to be able to see encounters coming so you can avoid them where necessary and just explore. In some JRPG titles, the early Final Fantasy games for example you don’t get this option, and battles hit you pretty much at random. The fact that I don’t need to repeat myself a hundred times in this game just to get to what I’m looking for is a nice touch. There’s a caveat to this though. 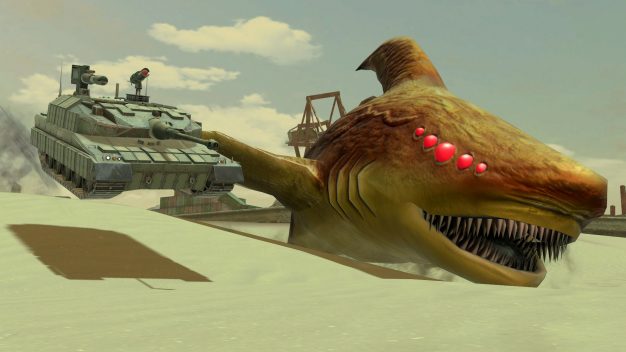 That is a sand shark. Amazingly, they aren’t friendly.

Enemies in Metal Max Xeno Reborn go from the sublime to the ridiculous. The standard enemies are generally relatively squishy and don’t stand up to being blasted apart by a tank very well. Killing these minions gets a little bit monotonous because they come in packs and there are usually quite a lot of them. You normally have to target them one at a time which makes combat feel a bit slow and cumbersome. Your machine gun can take out more than one but it’s not as powerful a weapon so there’s a trade-off there. On the other hand, you have bounty kills and these robots are stupidly hard to take out.

The problem is they usually guard the next part of the map you need to explore so you’ll find yourself running past them a lot. You don’t have to kill them to proceed and frankly, you won’t. Go toe to toe with one of these bad boys and you’ll get stomped flat in minutes. They’re kind of optional bosses which isn’t an issue but they’re also in the way and getting past them isn’t easy. Either give me something I can kill with a bit of leveling or give me something I can choose to kill but have to go and find. Please don’t put something that makes my cannon look like a pea shooter right in my way, it’s annoying. 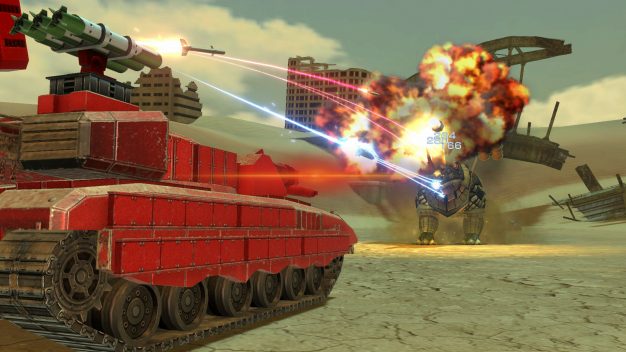 The threat feels very real with enemies that are impossible to kill the first time you meet them.

One thing I really like about Metal Max Xeno Reborn is the vehicular element, this is good because it’s pretty much the core of the title. In this particular case, I’m referring to being given a dirty big tank to run around in right at the beginning of the game. With the use of vehicles being an important mechanic, and different characters getting one of their own this isn’t something that’s been shoe-horned in to make the title more exciting. This means that the controls don’t feel weird and it doesn’t feel like you’re trying to move something big and dangerous that loses all its danger because it simply won’t do as it’s told. Tank controls in general feel a bit weird but I didn’t have any issues. I have to say enemies look a lot less scary from down the end of a bloody big turret. Saying this, please refer to the point I’ve just made about the more powerful enemies in the game which make your tank look like a toy.

When you’re not running around in a ton of killer metal you’re running around on foot and this is an interesting aspect of Metal Max Xeno Reborn. There is a certain amount of juggling to be done if you’re going to have an evenly rounded squad. You’ll have to equip your tank and other vehicles with new turrets, machine guns, rocket launchers, and engines and then upgrade these to make them tougher. You’ll also need to do the same with your character’s gear and consumables or they’re going to get eaten in the on-foot sections. All of this costs gold and you’ll have to have your accounting head on to make sure you spend wisely on resources. 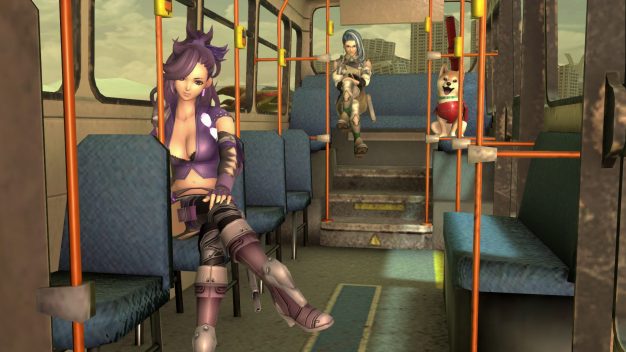 You’ll need friends if you’re going to win out against the machines.

The thing I hate the most about Metal Max Reborn is the frustrating quest system. Being told what you need to do and actually doing it are two very different things and this is absolutely evidenced here. Please don’t give me a quest marker that I can’t get to until I’ve completed a bunch of other things you haven’t told me about. I get having this big threat that is made bigger when you’re getting killed all the time but please give me a chance at completing what you’re asking me to. As an example of this, one of the quests involves checking outposts for any survivors. You’ll find the first one easily enough but getting to the second is far from it. I’ve counted three bounty targets in my way so far and I’m not even there yet. Progression feels slow and without side quests appearing at a decent rate, (they don’t in the initial stages of the game,) you get a feeling of playing for a long time and getting nowhere.

This I think is the biggest problem with Metal Max Xeno Reborn. There’s an awful lot there for you to do once you’ve gotten into the real meat of the game. There are all kinds of tank upgrades that do different types of damage and I know there’s going to be a ton of stuff to find and quests to complete, but the game doesn’t pull me in quickly enough to make me really want to explore and acquire all of these things. On top of this, the game looks like it should present quite an open world, when in fact it’s pretty linear. You can only take your tank in set directions and the on-foot elements, while nice, are also just as linear. You can’t run anywhere and explore everything. You can only go where the game lets you go and this spoils some of the aesthetic for me. Graphically the game also looks a bit bare with vast expanses of desert. There are lots of buildings dotted about but these are more for show than anything so although you’re being invited to explore you aren’t being given to do this as freely as you might like. 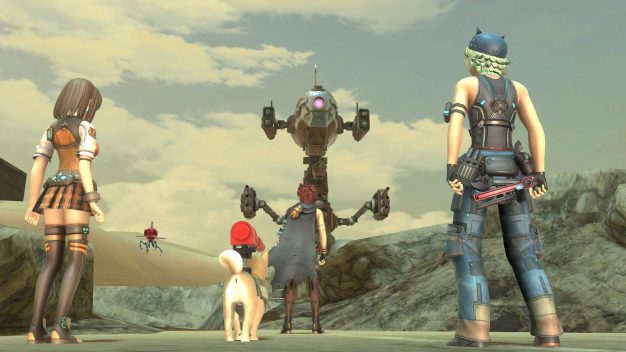 What we have here is a game that looks like it should tick all the boxes. What we actually have, for me at least, is a game that has a brilliant soul but thanks to some frustrating design choices early on, doesn’t make you want to embrace all there is to offer. It’s only good giving me hours of gameplay if I want to spend hours playing the game. In this particular, case I feel like I’ve been running around in circles and on account of the savage difficulty of certain enemies being killed far more than I’d like.

I’m speaking from the point of view of the first few hours of play. It’s this period of time that, for me, however, is some of the most important in any game. It’s all well and good saying that a title is excellent when you get into it but you have to want to get into it and the pace just wasn’t fast enough for me to really want to invest the time necessary. If you’re willing to bare with Metal Max Xeno Reborn you might find a magnum opus that I just haven’t given a fair amount of time to. I think those of us that want to get hooked quickly though will have a frustrating time here.

I can see what Metal Max Xeno Reborn wants to be but there isn’t enough to grab me right from the off to make me want to keep going. The game looks nice and it has all the elements of what should be a fun RPG. The difficulty level and in my opinion poor placement of enemies far too difficult to kill destroys some of the game’s atmosphere and, therefore, a lot of the fun in the process. The slightly empty feeling world, (yes I get it’s a wasteland but that’s not the point,) doesn’t help either. If you’re willing to keep plucking away Metal Max Xeno Reborn might be one that finds its feet but getting into the flow is tricky.