The story in Metal Tails: Overkill literally couldn’t be simpler. A demon has broken out and infected all the rock and metal goers turning them into nasty minions. As a guitarist who is suddenly being forced to watch his, (or her,) musical family being turned into monsters you go out to destroy the demon and his underlings. This involves you going from bars to festivals shredding all opposition until you get to your ultimate goal. To be honest it’s all a little bit cheesy but I kind of like it and it doesn’t need to be anything massively special with this being an action game. There’s enough there to give you an idea of what you’re doing and that’s fine.

The really odd bit is that the intro isn’t narrated in English when everything else in the game is. It’s not bad, it just sticks out like a sore thumb. It might be the case that they didn’t have time to record the intro more than once before launch but I’d hope to see them rectify this later. The fact that this plays out as a comic strip and all the text is in English makes the narration come over as even stranger. It’s literally the only thing in the game like this so it’s all just a bit odd. 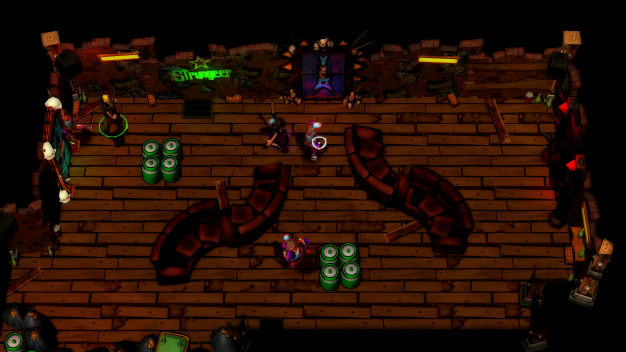 This is one hell of a bar fight.

Metal Tales: Overkill is a title that on its own isn’t doing anything dramatically clever. You’re swapping whatever instrument of pain you’re given in other games for a guitar and running from room to room killing metal fans. They’ve been demonically possessed so this is all for the greater good but seriously. Aside from this, the inevitable boss battles, and the usual roguelike shenanigans of giving you different playthroughs every time; there really isn’t a massive amount to mention. Any of you that know me know this is my genre and I play a hell of a lot of these games. This being said I’m always looking for something a bit new on top of the usual antics and normally my jaded ass would mark a game down for not standing out. In this case, I’m going to give Metal Tales a pass and I’ll explain why in a moment.

The enemies you face off against aren’t particularly stand out but all fit their roles rather well. From sonic shooting guitarists to speaker stacks on spider legs to screamers that throw a beam bigger than an 80s mullet it’s all very in keeping with the aesthetic. This is something that I think is really important and also something that should be a no-brainer. You’d be surprised how many games I’ve played that purport to be following a certain theme and then throw a bunch of enemies your way that have absolutely nothing to do with it. The bosses are fun to face off against too. I’ve endured much harder boss battles in other games but to be honest it’s nice to face enemies that are just difficult enough, without the crushing wall of pain that devs seem to want to subject us to every time we complete a level. 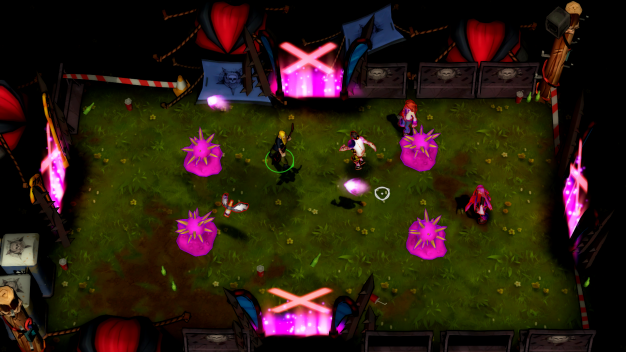 Speaking of levels. This is where I’d have liked to have seen a bit more. None of the levels are particularly large and while they look nice they get a little bit samey. Most levels have a shop, a challenge room, and a trap room. The shops thus far haven’t really had anything that I’ve wanted. I can usually build my run around the stuff I find on the levels so there hasn’t been a massive amount of reason to use them. Challenge rooms are fun. Here you get waves of enemies thrown at you that you need to beat quickly. Speedy completion gives you rewards and they’re a welcome distraction from room clearing.

Lastly, the trap rooms aren’t always worth navigating. They might contain moving saws, flame jets, or burning floor tiles. The thing is, they don’t always have a reward at the end of the gauntlet that you really want. By the time you’ve maybe lost a life or two and decided whether you actually want the prize, you’re stuck because you need to get back out without dying. For me when you get to the end of the room, the traps should stop so you can walk out. We’ve completed the challenge, please give us a break. Outside of this everything is a little bit so-so, fun but nothing to write home about. 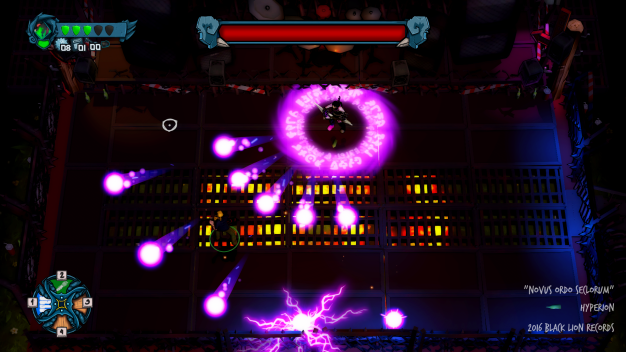 As you may have gathered by now, Metal Tales: Overkill is a fun but fairly basic arcade shooter. The lack of any real innovation would normally be a letdown but in this case, the game is a vehicle for something else that I think is really important. What makes Metal Tales: Overkill stand out as something worth backing is the music. All the tracks featured in this title are from real metal bands; none of which are known to the majority of us. You’ll be able to hear these tunes being played in the background as you go, (obviously,) but cleverly and crucially in my opinion they can all be heard separately in the game’s extras.

Each band has its own bio and the song attached. I see supporting those artists that aren’t necessarily new but are very unknown as massively important. The fact that you can learn about them and maybe follow someone different that you would have never come across otherwise is absolutely brilliant and I genuinely wish we could see this in more games. These people need all the help they can get. By playing Metal Tales you’re supporting these artists and when you look at it like this the game doesn’t need to be breaking records as the next big thing because it’s serving another purpose. As a final note, I don’t think this is a record label milking gamers for money, there are far easier ways to do that, I genuinely believe it’s for the bands. 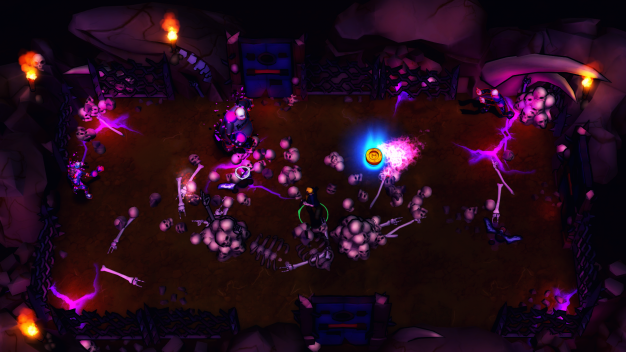 So what you have with Metal Tales: Overkill is a slightly above-average roguelike that’s helping a very important cause. If you just want a good action game and don’t care about the music then this isn’t really the one for you. Go out and buy something like The Binding Of Isaac, you’ll have a lot more fun. If on the other hand you just want a fun game with a killer soundtrack that’s giving some really great bands a way to get seen give it a go. If you have no interest in the rock and metal genres you probably won’t enjoy this but that should be fairly self-explanatory as the whole game is built on this premise. Personally, I love that it’s a champion for music and I’m having quite a lot of fun with it. It’s not going to win any awards but it’s a great way of killing some time and having a bit of fun in the process.

Metal Tales: Overkill isn’t anything special on its own. There are roguelikes out there that are doing a lot more with the genre and are far more innovative. If you’re a fan looking for your next big fix you’ll probably not find anything to write home about here. This being said this is a game that champions music and is full of genuine spirit. If you’re a metal fan and believe, (as most of us do,) in giving some musicians a bit of limelight then this is a very good call for your collection.