Minecraft remains one of the largest games out there years after its initial release thanks to dutiful updates and a dedicated community that keeps coming back for the game’s limitless potential for creativity. The game has become a cultural cornerstone. From children’s t-shirts sold at Wal-Mart to the myriad let’s plays and dedicated channels on YouTube, even your grandma has probably heard about Minecraft at some point. So, where does Minecraft go from there?

Surprisingly, the next step for the license is Minecraft Dungeons, an Action RPG Dungeon Crawler ala Diablo but with considerably more right angles. The game begins simply. A short cutscene introduces the player to the Arch-Illager, a small squid-like individual who has seized the power of a rare crystal and is using it to wreak havoc on villages across the land. An unknown narrator beseeches the player, and up to three friends in local or online co-op, to heed the call of the hero and embark on a quest across the land’s various biomes in a quest to stop the Arch-Illager’s evil reign.

The player is then dropped into a character creation screen, and it is here that Dungeons first diverges from the status quo of the genre. Rather than choosing a class to play, the player instead merely chooses from a selection of skins for their character. Then, it is straight off to the races. Interestingly, there are no classes in Dungeons. Instead, every character can equip up to three artifacts, each one granting the player an activate-able skill.

The skills are the pretty standard fare for an Action RPG. There are a couple of summons of Minecraft creatures, a fishing pole that pulls enemies into you, a firework that you can shoot from your bow and arrow for a large explosion, and a droppable totem that heals in a radius around itself, just to name a few. While there is a decent variety, you will become very familiar with the pool of all the artifacts as you will receive duplicates frequently, and the handful of artifacts that are objectively better than their peers will see to it that you never mix up your playstyle too much.

However, the lack of a character class does not mean that your character does not level up throughout your adventure. Each character a player makes has both a character level, raised through the standard experience gain, and a power level, which is the average power level of the equipment you have. At any given time the player equips their three artifacts, a melee weapon, a ranged weapon, and a suit of equipment. Most of the gear have some really great designs, and there is a decent variety at higher difficulty levels, but on a first playthrough the loot pool is dreadfully thin.

Each piece of gear comes with up to three enchantment slots, each with up to three choices that are randomly selected and can be leveled three times. As your character levels you unlock enchantment points to invest in the enchantments to customize the benefits of each piece of equipment. The invested points are returned to the player when the equipment is salvaged, but reallocating points every time you switch equipment, which is frequently, grows tiresome quickly.

In fact, weariness through repetition is a theme of Dungeons. There are only nine levels to play through as well as five secret levels that can be unlocked equaling approximately 3-5 hours to play through. There are also three difficulty levels, each one unlocked by beating the one prior, and while this is a standard feature for Action RPGs, Dungeons does not have the variety or complexity to maintain its appeal through multiple playthroughs. 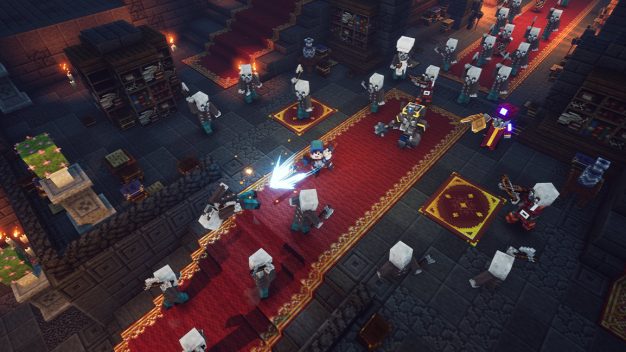 The levels, while beautifully designed in all their voxel glory, get stale through quickly. Not only is the core of their design delegated to two objectives types: going to multiple villagers of beacons and hitting A on them while killing enemies or proceeding through a series of ambushes, but the arenas throughout the level are also prefixed. The winding paths that the player navigates between the arenas do change, but the arenas, where all of the big fights and meat of the gameplay is, never do.

This feeling of familiarity is also deepened through the lack of traditional classes. The limited number of artifacts and equipment enchantments available mean that every character ends up feeling largely the same, especially when playing co-op. Getting a new piece of equipment just for it to be the same fishing pole grab but with a slightly higher percentage of stun is not a satisfying sense of progression, but is the only one on offer.

Dungeons‘s sense of progression is also hindered by the structure of how the loot is rewarded. Most loot that the player acquires is not through drops, but rather by collecting emeralds throughout levels and using those to purchase randomized drops from vendors at your camp in between levels. There are few bosses or minibosses in the game that pop up repeatedly, but even they rarely drop loot. This mechanic leads to gaining loot feeling unrewarding because you are just purchasing the chance for a good drop rather than overcoming an enemy or challenge to earn that drop.

Combined with levels containing the same repetitive slate of enemies taken straight out of Minecraft and even an initial playthrough of the game begins to feel stale and worn out before you are two-thirds of the way through. This could have been counteracted if Dungeons had a story that could keep the player hooked throughout the levels, but it is also bareboned on that front as well. After the introductory cutscene, and a cutscene wrapping things up quickly after beating the game, the meager bits of story are delivered through quick cutscenes at the start of each level that do little more than introduce the environment of the level. 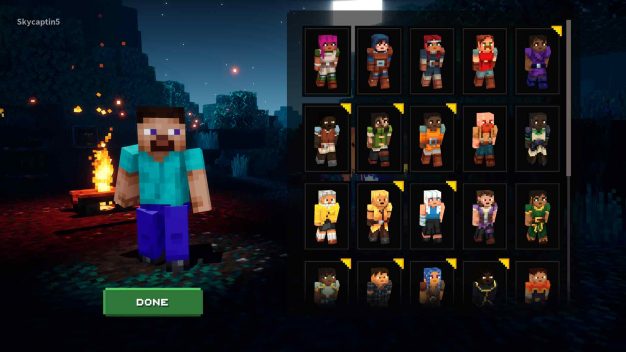 In closing, I was looking forward to seeing what Minecraft Dungeons would do. The Minecraft license lends a lot of possibility to a spin-off, and the drastic leap to a new genre was an opportunity to really add something new to the license. Disappointingly, Dungeons instead plays it safe, restricting itself to a bare minimum take on the genre void of meaningful changes to make itself stand out while the changes it does make are more of a hindrance that bogs down the gameplay experience.

Only worth playing locked in a dungeon $20

+ Combat can be fun at higher difficulty levels

-No story to be found here

-Chunky design that burdens down the experience

About the author: Arron Kluz

Arron Kluz has a bachelor’s degree in Media Arts and Game Design that has proven completely useless in his home in the Midwest. His love for video games started at a young age as an escape from the...  Read more...