I’m a massive fan of all things strategy. It doesn’t matter what a game is asking of me, if there’s brainpower involved I’m usually in. On paper Mittelborg: City of Mages looked rather cool, so I thought I’d give it a whirl and let you lot know how I got on. The experience was definitely an interesting one, whether that be good or bad, however, very much remains to be seen.

You all know me well enough by now to know that I can usually find redeeming qualities in every title. In my opinion, there is no such thing as an inherently bad idea or game. It’s all just down to the way those ideas are realized and nine times out of ten the things we complain about as gamers are totally fixable. You also have to remember that these things don’t just appear out of thin air and bashing anybody’s hard work is a pretty low thing to do. This being said, I’m going to do my best to be nice. In this particular case, though, this might not be an easy task.

So in Mittelborg you take control of the titular, City of Mages, which sits at a crossroads between other worlds. It is your job to defend the city and keep the tree of order at its center alive. You do this by shuffling your mages about the city and gathering resources from the other realms connected to it. You also build and fortify various locations around the city in order to provide you with new items, mages, etc. This in and of itself doesn’t sound too bad. Sadly a great premise does not a good game make and this is very much the case here. 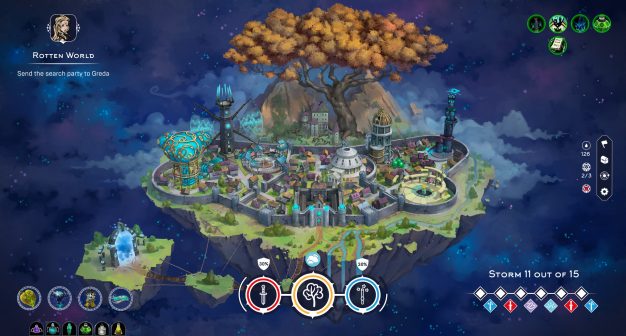 The first thing I need to point out is the UI. I would never call a game broken unless I absolutely had to but in this case, it can’t be overlooked. We aren’t talking a few little UI niggles that are mildly annoying, we’re talking great big glaringly obvious things. Mittelborg: City of Mages seems to freeze up as and when it feels like it. This prevents you from going any further and forces a full restart of the game. Thankfully, there is an autosave and you can continue from where you left off, but it’s still bloody irritating when it happens. Let’s remember that I’m referring to the PS4 version of the game and that this is just the experience I had, therefore, this may not be the case with all of you or all ports, still, it’s a pretty tedious glitch.

The next issue is the language. This is a story-driven game and, therefore, should in my opinion be easy to follow. It’s fairly clear that English isn’t the native language of the devs and when everything comes in text boxes things start becoming a little hard to follow. It’s not bad to the point where I wanted to put the game down but it was also something hard to overlook. Syntax aside, the story doesn’t feel like it has a great deal of flow. You get random encounters that occur as you play but there isn’t much by the way of lore in which to ground them. With this in mind, it just feels like stuff happening rather than events that could create a real sense of danger or urgency. The plot in general just feels a bit thrown together and for a game that seems like it’s trying to be rooted in the story that’s revolving around it, this is damaging. 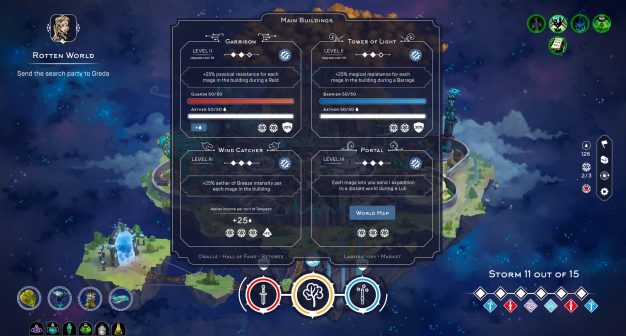 The actual gameplay in Mittelborg: City of Mages isn’t particularly exciting either. The game moves in phases that are represented by different colored storms. A red storm sees an invasion where your city is attacked by an army of marauding minions from another realm. Blue storms are magical and see you having to up those defenses accordingly. Then you have purple storms which give you time to collect mana, (the currency used for city building,) and finally lulls in the storm which let you go exploring.

Exploring other worlds could have been the most fun part of this game. I briefly mentioned encounters earlier, but there is also a central story that follows through the entire adventure which comes in the form of notes left by your predecessor. These, as you find out rather quickly actually don’t seem to have anything to do with your actions in the game. Your adventures, apart from giving you items,  just see you confronted with more badly optimized story so there isn’t a lot of reason to want to take part. 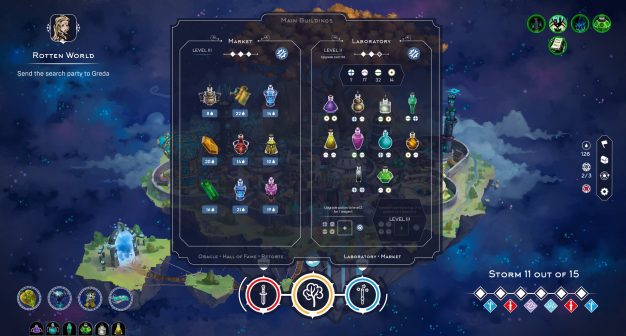 One thing worth noting in Mittelborg: City of Mages is the never-ending tutorial. You’re given various tasks to complete but at no point do you feel like you’ve actually entered the game. The other problem is that it isn’t even really a tutorial because quite often Mittelborg gives you a task and just sort of expects you to know how to complete it. I was told at one stage to summon a new mage from the crystal retort, (an area of the city.) I had no trouble building the retort but at no point was I told that summoning a new mage required me to spend items. Instead, I was taken to what looked like my inventory screen and I couldn’t figure out how to move on.

I’d love to say I spent hours with Mittelborg: City of Mages, but I didn’t. I died a few times and this sees you losing all of the buildings you’ve created in your city. Thankfully, you aren’t taken back to the very beginning of the game but having to recoup the mana to recreate your hard work is soul-destroying. Between that, the less than exciting plot, and the plodding, linear feeling the game has, this title just didn’t feel enjoyable. 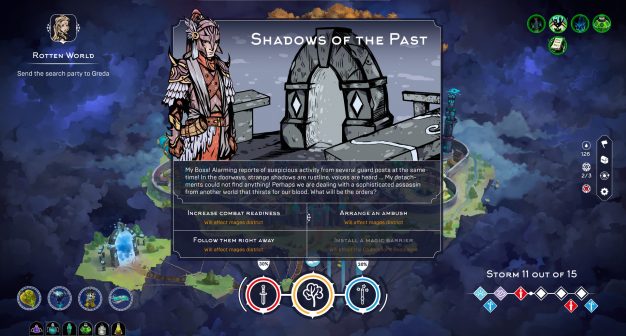 The core of any game should be that it’s fun. Even if you take Mittelborg’s glitchy UI out of the equation and totally overlook the bugs there isn’t much that’s redeeming. I like the artwork and if the story were slightly better written and a bit more grounded and tied together it would probably be passable. After that, you have pretty dull game mechanics and that’s about it. There are far better strategy titles out there to spend your hard-earned cash on. If this one is on sale at a very low price, give it a go, otherwise, I’d definitely look elsewhere.

On paper, Mittelborg: City of Mages looks quite interesting. This is about as far as this game goes. Between uninspired mechanics, a bit of a lack of strategy, and a poorly written story this game fails on most fronts. Strategy fans would do well to give this one a miss and look elsewhere.