MouseCraft is a new 2D puzzler by indie studio Crunching Koals, in which a crazy cat scientist is set on guiding three blind mice through a mouse-powered machine in order to unlock its mysteries.  While the game doesn‘t bring anything new to the table, the setting and puzzles confer a fun yet challenging atmosphere to what could otherwise be a relatively easy “get from Point A to Point B” game. Within the game, you guide three mice through increasingly complex puzzle systems, all the while avoiding hazards such as maniacal mechanical mice, exploding blocks, and even acid, in order to help your murine minions make it to their ultimate goal: delicious cheese.  To help your mice in their mission, you are given access to a limited supply of tetronimos, which you can drop anywhere into the puzzle where you think will be helpful.

At the beginning of each puzzle, you are given time to look over the puzzle’s layout and drop your blocks if you wish.  Then the mice are systematically released from their wheel, and trot on their merry way, jumping up steps or falling of ledges in a linear fashion until they come to an impassable obstacle, at which point they will head back the way they came.  It’s up to you to guide these mice to their endpoint.  Be mindful of all your mice, though!  They can drown, attacked by robotic mice, or even squashed by your block placings, causing your poor mouse to expire!  However, as long as one mouse makes it to the goal, you can move on to the next of 80 puzzles available.  These 80 puzzles are divided evenly into four major groups, and in order to move from one group to the next, you must collect a specific number of crystals.  Each level usually has around 2-3 crystals for you to obtain, and these add another layer of challenge to the puzzles, especially as time goes on.  Over time, you will have to figure out ways to split up your group in order to collect all the crystals within a level. 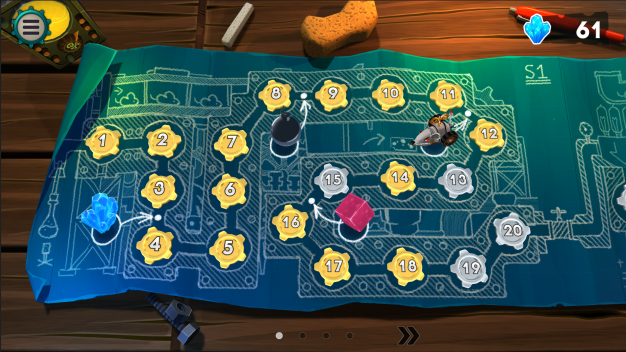 If you are the completionist type, one of the more enjoyable parts of the game is figuring out what went wrong in a particular puzzle, and what you can do better to perfectly clear a level.  There are many points where it’s easy to figure out how to get every crystal, but in doing so it causes one or two mice to meet a grisly fate.  While many of the puzzles are pretty simple to figure out, there are a few here and there that really tease your brain, and the mental satisfaction you get from figuring out that one puzzle can be gratifying.

Another point in the game that really made it enjoyable was the use of different types of tetronimos.  At first, you only have access to standard blocks, but over time you can unlock new forms that are necessary to complete certain levels.  Some blocks are made of jelly, which let mice fall from dangerously high areas.  Others crumble after two mice walk on them, forcing you to figure out multiple ways to get all of your mice to safety.  At some point you even gain access to blocks made of TNT, which will blow up a few seconds after touched! 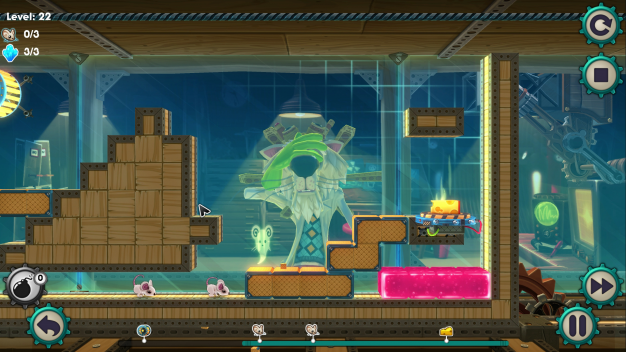 There are some elements of MouseCraft that may lead some to pass up on it.  This is not a hardcore puzzle game; it generally seems to be aimed at casual gamers who want to tease their brain a little and play with some cute mice.  You are never pressed for time to finish a puzzle.  In fact, you have the ability to pause what’s going on at any time during the level’s goings on to assess what is happening and place blocks as needed.  While it may not be the next Myst or even in the same vein as Braid, there is a sort of charm to it that makes you keep coming back for more.  I was even able to convince my significant other to sit down and figure out the puzzles with me while I was playing it on Steam’s Big Picture mode, and she usually doesn’t have even the faintest interest in video games.  It was probably the cute mice.

One of the more troublesome issues with MouseCraft was the unevenness of the difficulty as the puzzles went on.  In these types of games, you expect the puzzles to generally increase in difficulty as you progress, and through the early parts of the game, this was definitely true.  Occasionally there was a level that pushed you more mentally than the ones surrounding it, but for the first couple of areas the difficulty more or less increases gradually.  Then, in the third area, the puzzles get very challenging and took a lot of retries to get all crystals and mice to safety.  But once past that area, the final segment seems relatively simple.  It was almost a breeze finishing up the levels towards the end of the story. 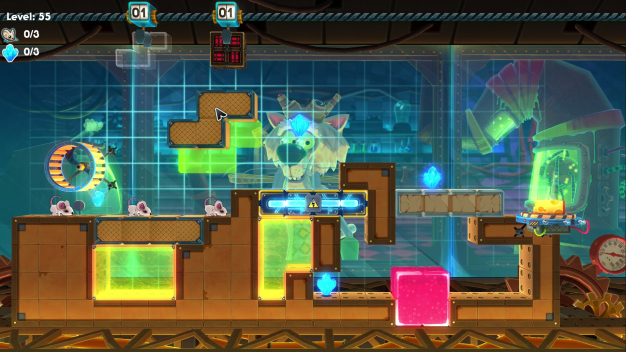 Overall, MouseCraft is an enjoyable, albeit casual, puzzle game that seems to be a cross between Cut the Rope and Tetris.  While there are some issues here and there, it’s good to boot up when you have some time to kill and want to challenge your brain a little.  I got immense enjoyment out of playing it with my SO and letting her tell me where to place pieces to complete the puzzles.  While 80 levels do go by fast, there is a level builder where you can design your own puzzles.  While there is currently no official distribution method, the developers are working on adding support for Steam Workshop in a future update.  Hopefully a similar mechanism can be established for the PlayStation versions as well.  MouseCraft has a solid gameplay mechanic for its puzzles, and for what it offers I’d say it’s pretty gouda; there’s no whey you’ll be bleu if you decide get it.

MouseCraft was released July 8, and is available directly through the developer’s site, DRM-free, for Windows, Mac, and Linux users at $11.99.  It’s also available on Steam and through the PlayStation Network Store as a cross-buy for the PS3, PS4, and PS Vita, both for $14.99 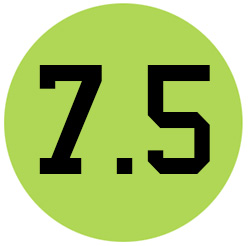