Move or Die is a quick, fun, and amusing multiplayer game by dev team Those Awesome Guys. It arrived on the Playstation 4 in March 2019 after its original release on PC back in January 2016.  Move or Die has joined the likes of Jackbox, Mario Party and Crash Bash as a very fun, brutal fast-paced multiplayer bursting with variety.

The basic rules of Move or Die are very simple; they’re right there in the title. You control a character with a few basic actions available: move, jump, and occasionally an additional command depending on the level type (e.g. square to shoot a gun). You have a health bar. If it runs down to zero, you die and probably lose entirely. If you stop moving along the ground or a platform, you die. If you move, it regenerates.

Jumping doesn’t refill your health, so if you do nothing but jump, you’ll die. Roll that premise into any of the 20+ game modes (stages/levels) and you have a recipe for fun and insanity. The game modes vary wildly from “avoid the giant spike ball flinging around the stage” to “collect treasure and steal other people’s treasure” to “whoever cleans the most paint off the wall wins” and many, many more. 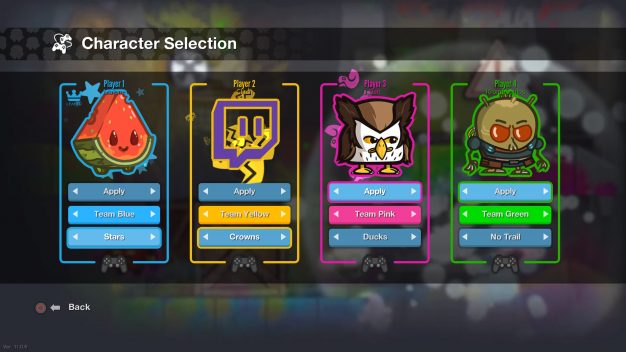 If that’s not enough, there are also mutators that you can select which change gameplay in various ways, and some are more sinister than others. The “Decoy” mutator was both our least and most favorite, since it floods the stage with countless decoys of your characters, making it impossible to tell what’s going on. There are also fun and brutal practical mutators like “Deathsplosion” which makes you explode when you die, hopefully killing a nearby player in the process.

There’s also seemingly endless customisation available for trails behind your character and avatars to choose from, including many references (you can seriously play as the Discord symbol). After a few games alone with some AI, a game with my boyfriend against two AI, and then a full-fledged four person brawl, we saw most if not all of the game modes, cycled through countless avatars, and tried out many mutators. We were kept busy, happy, cackling, and so, so loud for over half an hour without stopping. 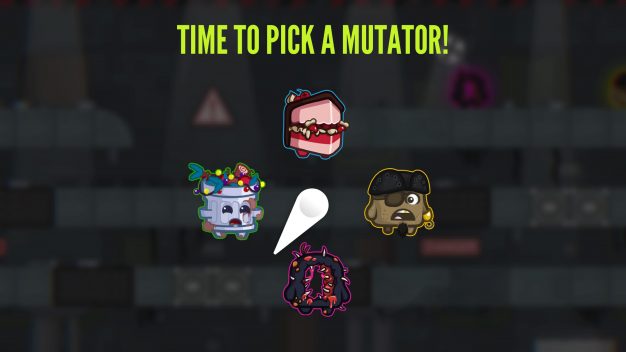 When starting up a local multiplayer session, you choose how long in minutes you want the session to last. From that, you select a number of game modes equal to the number of minutes you selected previously (e.g. 5 minutes = 5 game modes). First to reach 25 points wins overall, but if it takes more than the number of stages you selected, the game will randomly cycle through the ones you selected again. The rounds are exceptionally quick and sometimes finish extremely quickly depending on the layout or the relative skill of your opponents.

I tried to give online multiplayer a crack, but Australian internet didn’t really allow for it. However, by playing online matches you can more easily earn XP to unlock more game modes, avatars, and other bits and pieces. Personally, I think the game is robust enough as it is to not require XP grinding, but that’s up to the individual. As for graphics and music, I won’t lean too hard on these for this review because it’s such a basic game that it feels unnecessary to let those factors weigh heavily. Everything looks and sounds fine and is pretty basic but appropriate for the game and that’s pretty much all there is to that. Serviceable and fine, nothing out of the ordinary or special. 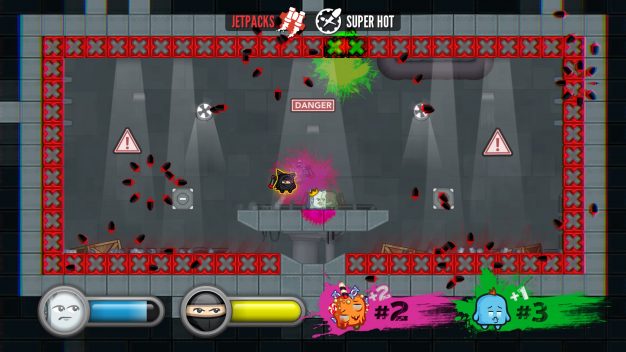 I only have a few criticisms of Move or Die. Firstly, jumping is a bit difficult at times, and can be a real disadvantage if you have a “home” point (e.g. a treasure chest belonging to you) on a higher platform when others are closer to the ground. We found ourselves falling off the edges countless times just because jumping wasn’t happening naturally. It feels like it needed to be a bit lighter, and perhaps a little bouncier.

Secondly, the narrator simply isn’t funny, and he’s repetitive to boot. When it comes to games like Jackbox, you can expect to have regular quips thrown out by “funny” narrators/presenters and usually they’re shrug-worthy, and that goes double for the Move or Die narrator. It really grates after a while when he’s said “I like bananas” (wow, so random) for the fifth time that round. That style of humor doesn’t really land for me anymore because I’m well into my 20s at this point, but if I have to listen to it I don’t want to hear the same three lines of dialogue over and over again. 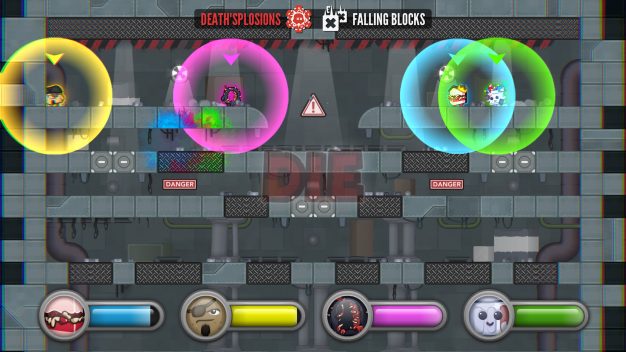 Really, if you’re looking for an excellent party game, look no further than Move or Die. There’s heaps of game mode variation, mutators keep things plenty fresh if you’ve hit a point where you’re cycling through the same four or five game modes, and if you have enough people that you’re also cycling through those, the game will probably last well over an hour, after which you can move on to something else. Online is probably pretty fun, too, given how couch co-op feels to play, but I think this is best played where you can hear your friends shout in dismay after you stab a chainsaw in their back. 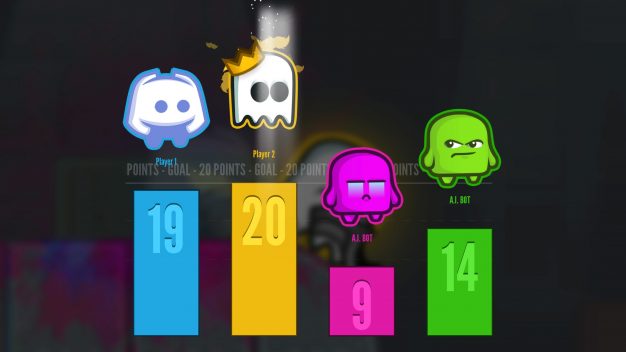 Move or Die is available digitally for PS4 on the Playstation Network for $21.95AUD and comparable international prices.