I have fond memories of the old Predator video game. No, I’m not talking about Predator’s 1989 NES outing, which pitted Arnold Schwarzenegger’s guerrilla warfare veteran against the eponymous interplanetary head hunter. I’m talking about Predator’s 1992 Sega Genesis outing, in which you stepped into the sensible loafers of Danny Glover’s police detective. Like the movie, Predator 2 the video game saw you playing as Lt. Mike Harrigan, basically Glover’s character from the Lethal Weapon series with more Jamacian mobsters and alien hunters. You spend most of Arena Entertainment’s top-down shooter shooting drug dealers and rescuing hostages, occasionally fending off attacks from an extraterrestrial fishnet-clad killing machine. No offense to the esteemed performance of Mr. Glover, but it’s the City Hunter Predator who steals the show and who has been immortalized in NECA’s video game tribute figure series. 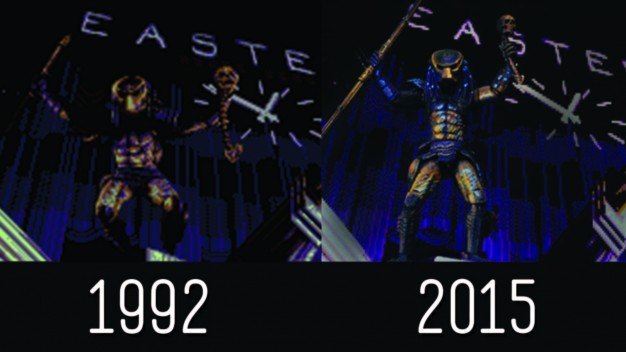 Starting with a tongue-in-cheek tribute to the terrible Friday the 13th NES game from the 80s, NECA has steadily grown their line of video game tribute figures, taking existing sculpts and giving them a new paint job to look like their classic 8-bit and 16-bit incarnations. These figures are insanely popular, and for good reason; the designers at NECA clearly love what they do, adding little details to heighten the nostalgia. They’ve even given the packaging a makeover, creating a pitch-perfect homage to the original Sega Genesis video game box art. 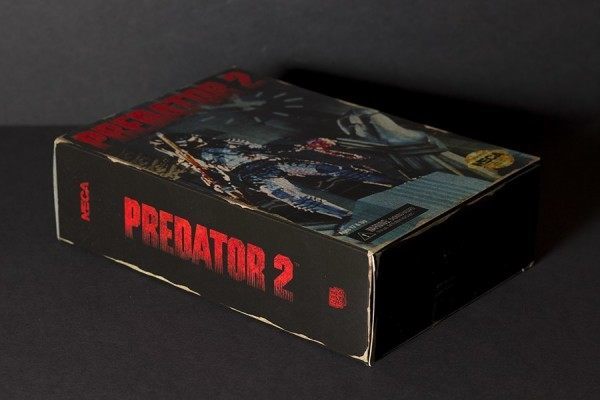 Like their other video game tribute figures, City Hunter Predator comes in a video game-styled box, complete with mock wear and tear around the edges. On the front of the box, in the lower right hand corner where SEGA would place their official seal of quality, is a familiar looking NECA-branded gold stamp. On the back of the box, screenshots have been replaced with pictures of the figure, featuring close-ups of his deadly assortment of “weapons of the hunt,” from the high-tech (an articulated plasma caster shoulder cannon) to the slightly less high-tech (a spear…to be more specific, a self-powered telescoping spear made of unbreakable alloy that shoots electricity).  You’re too old for this shit, Harrigan. 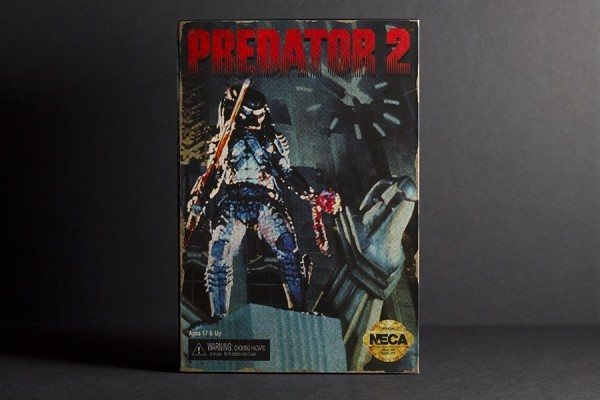 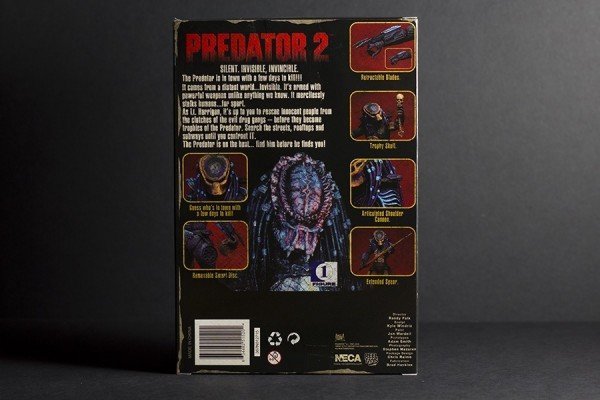 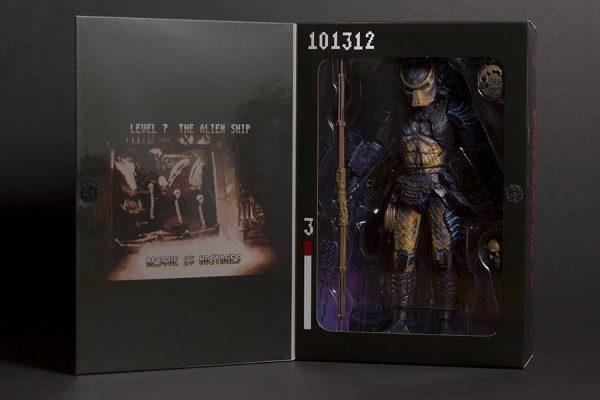 Opening the front flap reveals actual graphics from the game, specifically a pixelated peek at the trophy case aboard the Predator ship , which in addition to several human skull-and-spine sets houses the skull of the Yautja’s second favorite prey – a Xenomorph warrior. A great thing about this series is if you’re the NIB type, all the figures in NECA’s video game tribute series display nicely in their packaging, looking like oversized versions of the original NES boxes but still allowing you to take a peek at the toy you dare not touch! They even include in-game backgrounds to enhance the “displayability.”  Behind City Hunter you’ll find artwork recreating one of the movie’s most memorable moments, which also made the cover of the video game box – the City Hunter voguing atop downtown Los Angeles’ iconic Eastern Columbia building. Work it, girl! 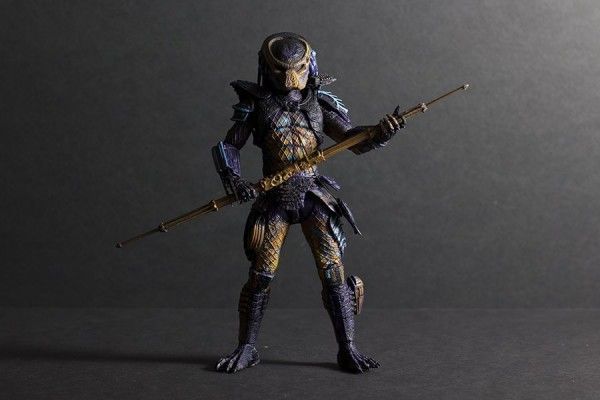 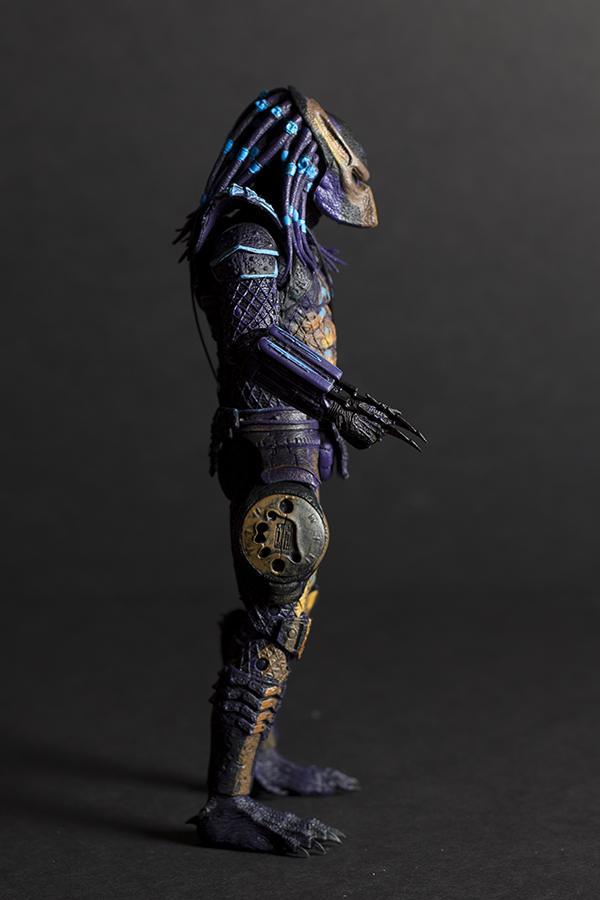 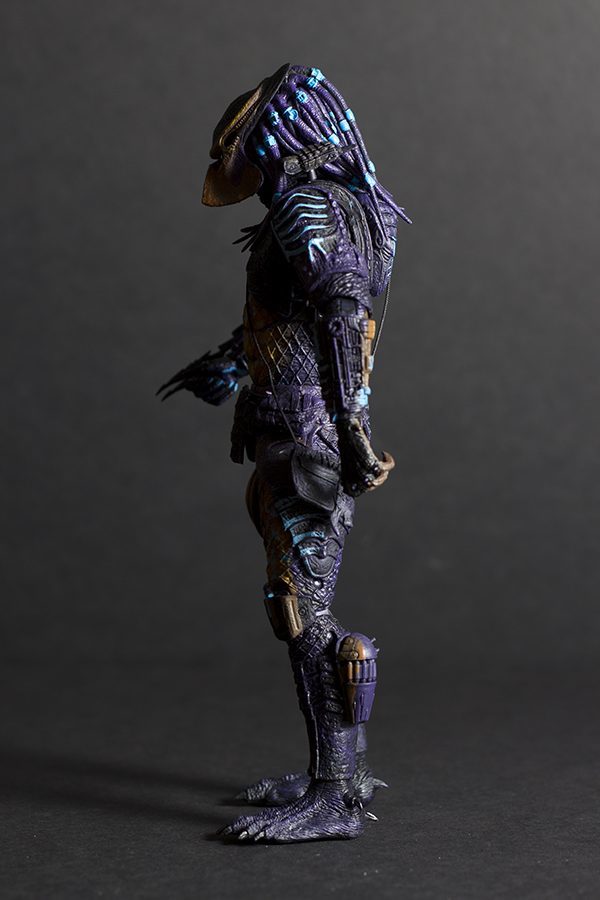 The City Hunter is actually NECA’s second video game-inspired Predator figure; following Jason, Freddy and Robocop, their fourth release in the series was the classic Jungle Hunter Predator, based on the 8-bit sprite from 1989’s Predator for NES. As much as I love the blue-hued paint job on the Jungle Hunter, I’ve actually grown to prefer the look of the City Hunter. The 16-bit sprite gave NECA more colors to play with, and this predominantly purple and brown figure has a grittier, darker look befitting a Predator, with just a few bright blue and light tan highlights to emphasize his video game origins. Combined with NECA’s always detailed sculpt, it will look just as striking next to your other video game tribute figures as it will alongside other Predator figures. 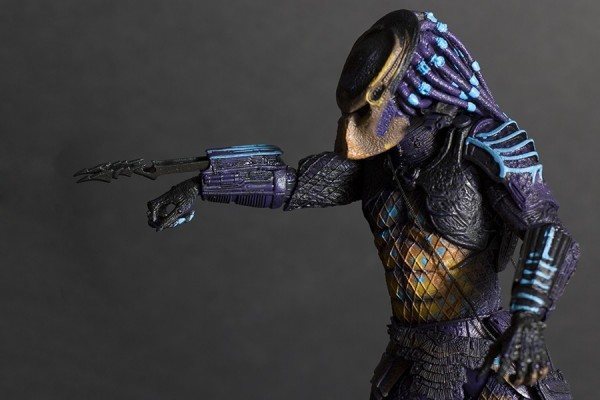 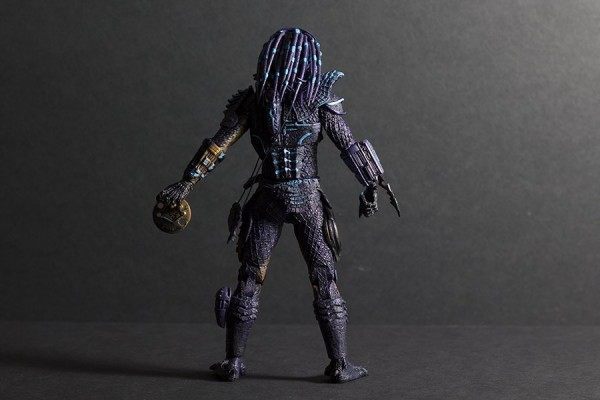 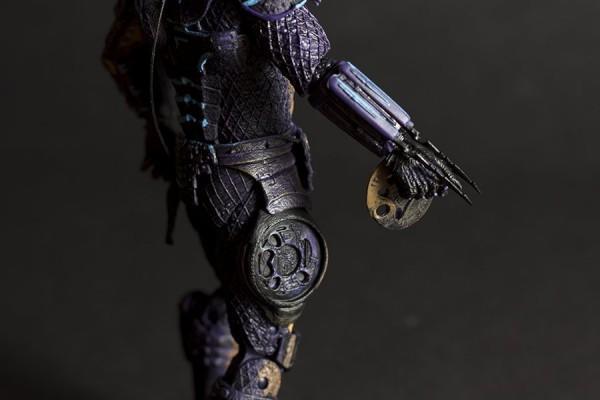 The City Hunter Predator stands 8″ tall, which means he’s able to stare down a majority of the other figures in the line; but his size is not nearly as imposing as his bevy of weapons, which includes a smart disc, combat staff, retractable wrist blades and articulated shoulder cannon. The accessories are given the same stylized paint job, with particular attention paid to his human  skull-and-spine trophy. The other two “removeable” accessories, his staff and a smart disc that snaps into the holster on his right thigh, may not have that extra splash of red pixels that makes the skull so damn cool, but their two-toned look let them blend seamlessly with the overall aesthetic. My only complaint – more of a concern really – is that the accessories seem a little fragile, specifically the wrist blades and combat staff, which I snapped removing from the plastic housing. Thankfully, a little super glue and my City Hunter was back in (the mass murdering) business. Just be careful when posing. 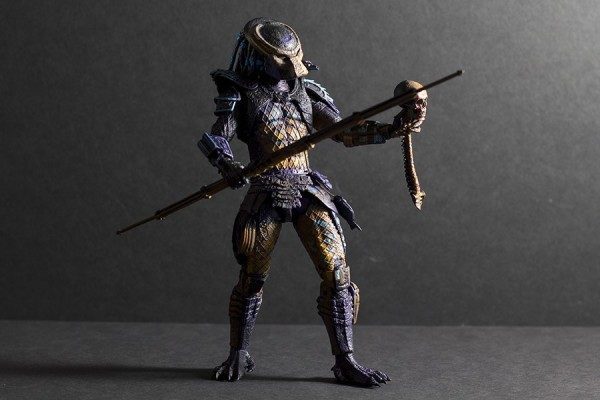 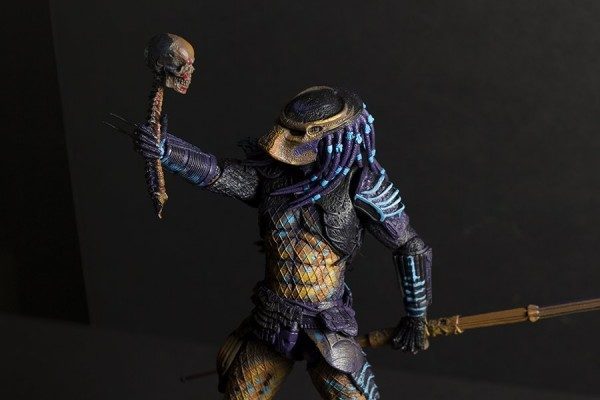 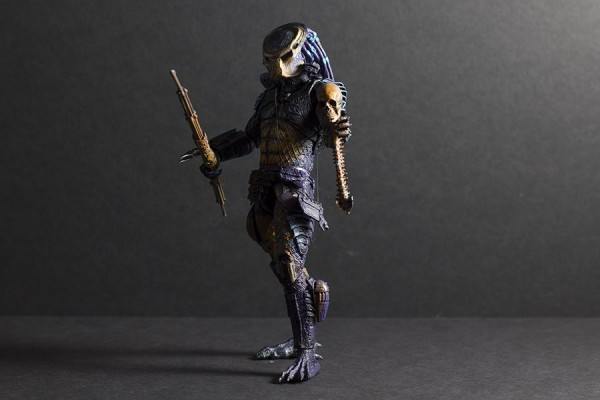 And speaking of posing, with 25 points of articulation this Predator can strike a variety of display-worthy stances. He has elbows that bend and swivel, hinge joints at the knees, and ball joints at the base of his skull, shoulders, hips, wrists and ankles. Even his hair is posable. If his weapons don’t get you, this City Hunter can always stun you with his perfect, pliable dreads; each lock is attached only at the root, letting you “style” his hair to a certain extent. 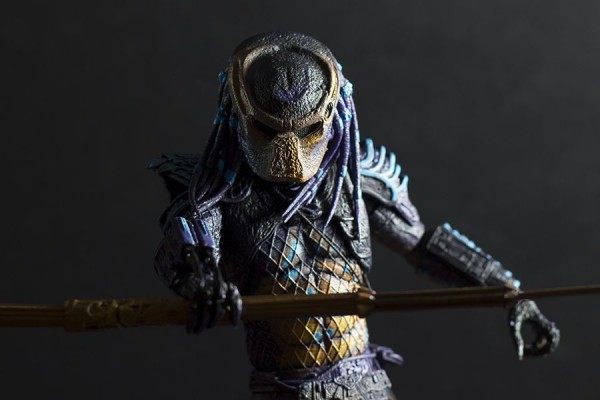 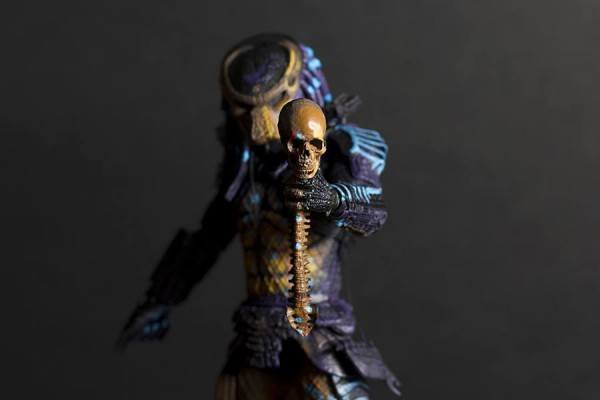 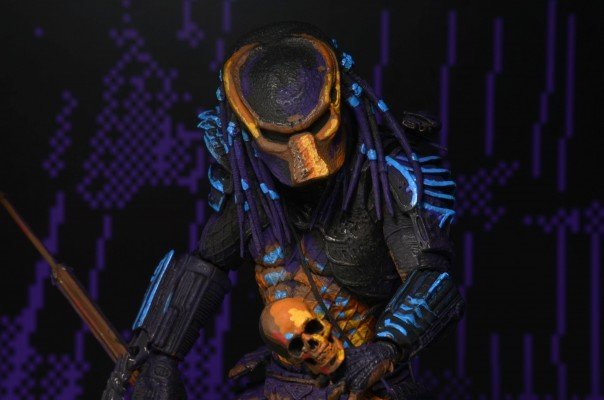 With nearly a half dozen iterations under their belt, NECA has pretty much perfected the mold for the City Hunter Predator; it’s smooth when bending, firm when posing and looks absolutely amazing. Giving it a 16-bit paint job, straight from the end title scene of Sega’s 1992 classic,  is the icing on murderous cake. This truly is the next best thing to a Lt. Harrigan figure.

A worthy addition to your trophy case

The eye-popping color palette, along with and the detailing in his arsenal and armor – just look at that little Predator purse! – make NECA’s 16-bit City Hunter Predator another “must have” addition to your collection of video game tribute figures.