Last time, I recommended that people unsure about Labo VR should pick up the Starter Set first, and then expand from there if they like it. Following my own advice, I did eventually pick up Expansion Set 1. This box can only be purchased from Nintendo’s online store, and it provides the pieces for the Bird and Wind Pedal Toy Cons. After being pleasantly surprised by the Blaster, I was excited to continue. And then I was…less excited. 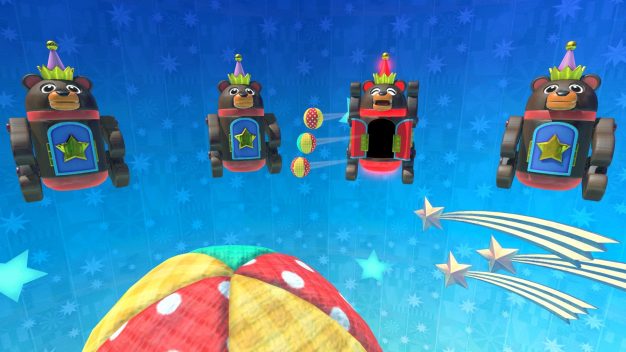 Before I get too far into that, let me talk quickly about the Toy Cons themselves. These two are odd because they don’t really represent objects you’re using in the game. The Wind Pedal is just that: a pedal. It’s got a huge scoop on the top to blow air at you while you’re playing, which can add some extra immersion to the games. The Bird, meanwhile, is basically a bird attached to two handles. Squeezing the handles makes the bird flap its wings. Again, it isn’t a great fit for the Labo line-up, since squeezing handles is not generally how birds fly. Still, it is satisfying to play with, even if it does cramp your hands after a while. Both builds are deceptively time-consuming, but they’re quicker projects than the Blaster was. Neither end result is nearly as cool-looking, sadly, but they’re as fun to build as any other Labo project. 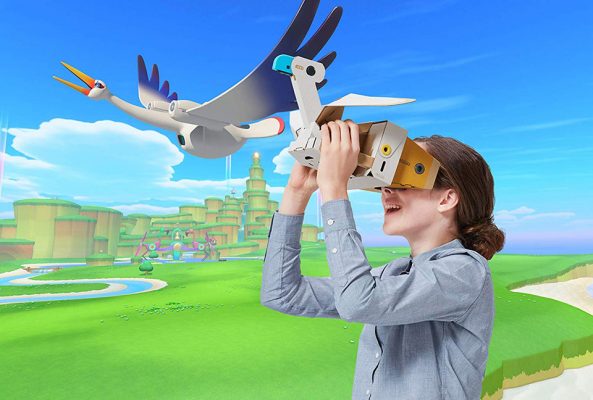 There are three main games that use this expansion: Bird, Bird Dash, and Hop Dodge. The most fleshed out is probably Bird, which has you piloting a bird-mobile across a set of islands. Your goal is to collect food to feed the various chicks across the play area. It’s not the most exciting game, but the setting is kind of fun to explore. It took me a little while to find enjoyment from it. Squeezing the handles on the Bird Toy Con flaps your wings, of course, and you can also use the Wind Pedal for a speed boost. Other than it being sort of dull, the biggest issue with this game is how easy it is to lose calibration and find that your bird is no longer facing forward. This can be fixed, but it also means that as you adjust your position to account for this, you get further away from the Wind Pedal. I should note that the Pedal is optional for this game, and I have mixed feelings about using it. On one hand, the speed boost is really helpful when you’re trying to reach a distant chick or something like that. On the other, it sort of defeats the purpose of using the Bird at all, and it isn’t enough of a speed boost for the wind effect to really feel appropriate. I usually stick mainly to the Bird, but use the Wind Pedal when necessary. 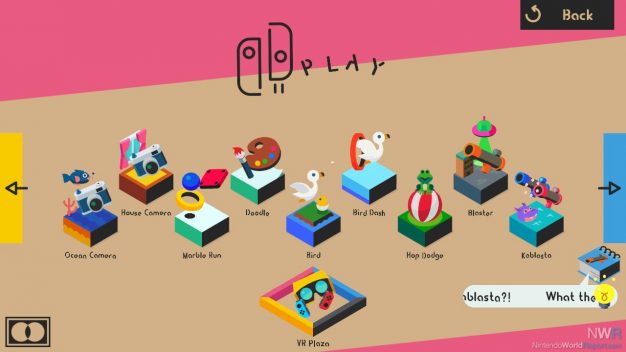 The other two games are a lot more straightforward. Bird Dash plays the same as Bird, except that you have to fly through gates along a path as quickly as you can. Since speed is key here, you definitely need the Wind Pedal. The only real issue I have with this one, outside of what I said about Bird, is that sometimes you can’t see where the next gate is. The field of view for Labo VR is fairly narrow, so if the next gate isn’t immediately visible, you’re likely to go in the wrong direction. There are sometimes arrows, but they don’t always help. I don’t see myself coming back to this one much, but it is a nice little extra. The other smaller game is called Hop Dodge, and it only uses the Wind Pedal. You essentially control a frog, jumping with the Pedal to land on top of a ball or hit one with your head. Here, the “wind” part of the Wind Pedal works a lot better; it times well with the visuals to really let you feel like you’re jumping up. The Discover section of the software does note that the Wind Pedal is primarily for Hop Dodge, but I would have changed how it works for Bird and Bird Dash. Rather than being a minor speed boost, I think it should have been a big speed boost that you can only use every so often. That way, the effect would better fit the function of the Wind Pedal, and it wouldn’t overshadow the Bird Toy Con as much.

This expansion is something of a mixed bag. The Bird and Bird Dash games are fun, but they don’t work nearly as well as Blaster. Hop Dodge is very enjoyable, but only in small bites. Neither Toy Con is particularly impressive in its functionality, and that’s the biggest benefit to Labo. Then again, this is coming from someone with a Vive who’s played Eagle Flight. I do recognize that Labo VR is meant to be an entry into virtual reality, though, so it’s important to note that my views will be different from the views of the target audience. For them, I think Expansion Set 1 might be really cool, and a good introduction to free exploration in VR. It all comes down to what you have access to, I guess. The base set I recommend to anyone, even if you do have a better headset. But for this expansion, give it a look only if Labo VR is the only VR you have.