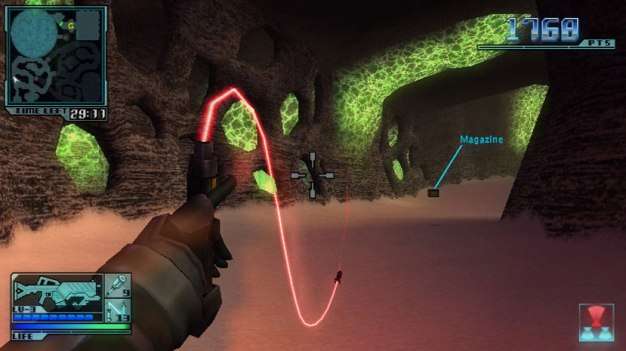 The Wii has had a tortured history when it comes to FPS games. Initially billed as the console to revolutionize the control mechanisms within the genre, proof only arrived a year after the console’s release in the form of Metroid Prime 3: Corruption. Onslaught from Hudson Soft however is something of an oddity in that it’s an FPS game with a fairly lengthy single player mode and a sparse but entertaining online mode that’s actually available for only 1000 points on WiiWare.

Considering the size limitations placed on WiiWare games, Onslaught actually looks pretty polished, if a little bit generic. Jagged edges have been kept to a comfortable minimum, and the framerate rarely dips — an important point for Wii FPS games as dropped frames can really hamper the usability of the controls. Speaking of which: there are four pointer sensitivities to choose from, and all but the least sensitive work fairly well. While never quite reaching the responsiveness of Retro’s Corruption, the game actually gets pretty close to the recent Call of Duy 5: World at War. While the cursor moves quickly enough, movement about the stages always feels very slow. The game’s sound design ranges from forgettable all the way through to hilariously bad – hearing your avatar shout: “That’s why you’re still a kid” at an army of cretinous bugs won’t make sense the first time and the fact they’ll do it again and again doesn’t change that.

Despite only having a mere handful of different enemies to fight in the entire game, Onslaught remains reasonably entertaining throughout. Essentially, the missions are all based on blasting the same few respawning bugs, but the mission structure and potential for combos offers just enough so that it never gets tedious. There are also two squad mates that help out and can be set into different formations, adding a little tactical depth to the levels. The gestures used in the game for things like wiping away poisonous blood are also accurately recognized, but in the heat of battle gesturing with both hands to wipe away green goo and reload at the same time can cause a little too much confusion.

On top of the single player campaign Onslaught also has a basic but smoothly implemented online multiplayer mode that’s focused entirely on co-op action. When not using Friend Codes, the game is able to find other players within roughly half a minute, after which stage selection is decided democratically. It really adds up to quite an impressive package overall, though whether it’s enough to tear gamers away from the army of other feature packed FPS games on the market is another issue. It would have been nice if Hudson Soft had taken a few more risks with the game, given the unique opportunities that only the Wii offers, rather than staying so firmly within the genre’s conventions.