The term “casual gamer” is a bit of a slur now. This moniker is usually given to someone who thinks gaming is encompassed by only playing [insert mobile time sink here] while waiting for an appointment, waiting for the bus, sitting on the toilet, etc. Go back to the early to mid-2000s, however, and “casual gaming” was something entirely different. There’s a point to this so please bear with me.

At one stage, casual gaming was a genre all of its own. These were the games you played when you didn’t have time to do a great deal of anything else. They were designed to be a brilliant way of spending half an hour while you had a break. They were great when you just wanted to relax or, actually, didn’t really know what you felt like playing.

We need to remember this was before the P2W market was ripping people off in full force on mobiles. You bought the entire game, often very cheaply, and just played. No paywalls or energy bars, or just getting 20 minutes in 24 hours. If you loved the game you could play it till the cows came home. I found the Hidden-Object genre through this method and absolutely fell in love with the Mystery Case Files games, (which I bet are still out there, do yourselves a favor and find them.) I love this genre as a really great way of killing time and now I’ve found Out of Sight! The game we’ll be discussing today. See?! I said we’d get there! 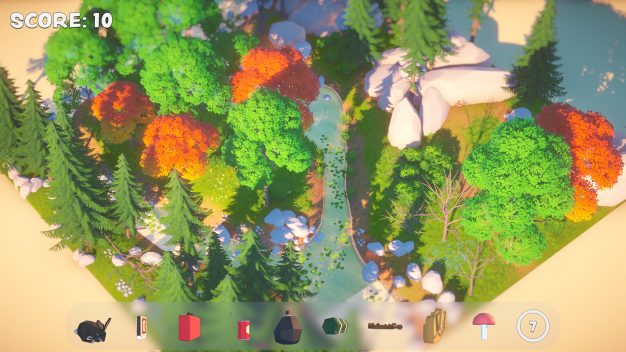 The little ramble above wasn’t just me reminiscing, I was making a couple of very important points that relate to Out of Sight. The first of these is that it’s a casual game, but that at the same time we need to make that very important distinction between a game played in short blasts and a game that’s designed to be looked at in the more broad sense that I’ve just mentioned. You have to take Out of Sight as what it is. It’s a fairly simple hidden object game, (on the surface,) with a chilled-out sound score that’s possibly played best in shorter bouts.

So, Out of Sight, is simple in the best possible sense. There isn’t any storyline to worry about and the only objective is to find the items listed for you in each level. That’s it! Did this affect the amount of fun I had, and am still having playing this game? Not a jot. It’s nice sometimes to be able to play something that doesn’t have you running in circles with a million things to think about and just slow down and relax.

I mentioned that Out of Sight was simple on the surface and as you can probably see it very much is. The difficulty comes in the fact that this game is 3D. Most Hidden-Object games will give you a scene with an over-abundance of different items in it and make you find specific ones. There’s nothing wrong with this and some of my favorite games in this genre follow this model. Here the challenge comes in effectively picking a needle out of a haystack. Out of Sight takes a very different approach. You’re given a scene that looks fairly simple on the surface. This is a game of camera manipulation though.

For example. One of the scenes is a farmyard and to look at it from a distance it isn’t very big. This is deceptive because as you zoom in you see more items dotted about the place. More importantly, you won’t see half of what you need to until you start rotating the camera and noticing that the items you’re looking for are often hidden behind other objects. You won’t see these items without altering your own field of view. So to take my last point, this isn’t a Where’s Waldo of multiple things it’s an inventory of items very cleverly hidden. You also find that you’ll need to manipulate certain items on the level to reveal what you’re looking for. All of this amounts to a style of play that’s unique to me and that I’m really enjoying.

Nuts and bolts-wise. The controls are as simple as you can get. You can perform all you need to with the mouse, or keyboard if that’s your preferred gaming style. To be honest, the mouse controls are probably easier but this is purely personal taste. Graphically, Out of Sight, is colorful and beautifully done. Remember, we aren’t playing a 60 hour opus here with all the graphical content of a movie, the title does what it needs to do and does it very well.

The music is perfect for the overall feel that Out of Sight is going for. There is a beautiful Zen soundtrack playing along in the background that does a lot for the relaxing nature of the game. It isn’t necessarily going to stick out for you audio junkies but it’s perfectly fitting for the task it needs to perform.

All in all, it’s lovely to play a game every now and again with no stress, no time limits, and no lives to worry about. All you need to do is perform a relatively simple task and do it at your leisure. You’re scored as you go but even this doesn’t add any pressure. If you’re someone who really needs those high scores there’s a level select so you can go back and have another try.

Out of Sight is a game that knows what it needs to do and does it very well. Gamers that like a puzzle would do well to give this title a try. You can find it on the Steam store for the princely sum of £4.75. In my personal opinion, it would be a fiver very well spent.

Everything in it's place

Out of Sight knows exactly what it wants to be. This is a relaxing, casual, game and isn’t trying to be anything else. I would say for the very reasonable cost of this title it’s a worthy investment for any puzzle fan.