A little neon archeologist bouncing around the ocean of Bahlam? Yep, that’s exactly who I was when setting off to discover and uncover the underground ruins of said South Pacific Ocean city of Bahlam – sunken city, home of the Old Gods & the Wozan. At the start of the adventure things do look and feel a little mundane. While it all looks a little different and, yes, it does feel a little different, there’s an odd sense of familiarity that twangs at the strings of repetition. However, the strings quickly break and the true play reality forcefully becomes apparent. Mark the repetition off as nostalgia, as OUTBUDDIES does everything our lil’ 18-bit Metroidvania hearts desire…with quite a bit more thrown in that our hearts didn’t even realize they were longing for. 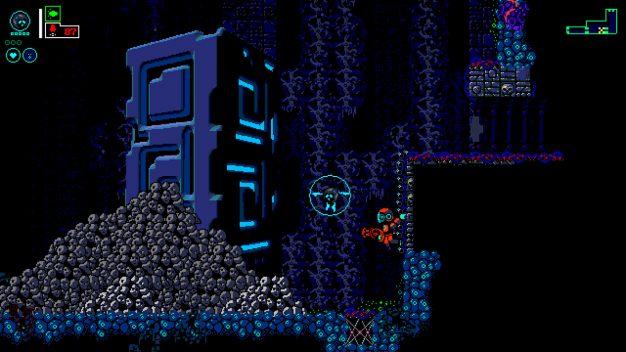 Much of the repetitive nostalgia is thwarted in the initial stages of play. You’re guided towards the varied controls and their uses with a series of play-tests that help you understand/action each instruction. These instructions come from interactions with your bubble-mate, or ‘supernatural Buddy-unit’ [same-same], as you progress further and further along. So, the game that starts off appearing much like your run-of-the-mill left-to-right, jump and dash adventure, subtly reassures you that there’s much more at play here.

Back it up a little

Before getting too ahead of things, there’s a need to talk about what the game does visually and audibly. For a good quality chunk, it’s the audio and visual elements that reign in traditional esthetics of traditional Metro’s. All block colored, vibrant and pixel-art and 2D, with the screen jolting about with you as you start to explore. For me, the audio chugged a large portion of what maintained my focus. The beats are there, but subtle and relaxing. It may be a bit misguided to focus on audio as a motivator for gameplay, but it really does place you in a kind of trance-meditative keep pressing forward, mood? Anyway, I really enjoyed the audio. The visuals amp up as you progress further too, with clever visual placement of artifacts and scenery that can confuse your sense of direction.

Direction is another aspect to word about. There is none. Not in terms of moving direct from point A to point B. The layout boasts some fantastic opportunities for exploration, which is great to experience; especially the moment you realize that advancement is non-linear, and how large and vast the landscape. There are even manners in which to open a “new” section through your various abilities. So, trial and error then becomes a tool in your arsenal for getting around the place.

Back it up a little more…

So, you start off with your lil’ bubble-mate and you, Nikolay Bernstein, marine biologist / maritime adventurer, fella. You start exploring about, moving about, bobbling about? in what seems to be the obvious direction. Along the way you pickup new controls or skills that advance throughout the games progression. Your bubble-mate helps you with this, often signalling at the beginning of your adventure with new ways you can interact. As you progress, so do your skills, abilities, and ways for interacting with bubble-mate. You learn quickly enough that bubble-mate is one of your best assets. You can manipulate bubble-mate to help with your surroundings, as bubble-mate is very good at manipulating surroundings, hacking stuff, scanning for the things, and using telekinesis to give you a lil help-glimpse. I found bubble-mate to be one of the games greatest and most intriguing elements. 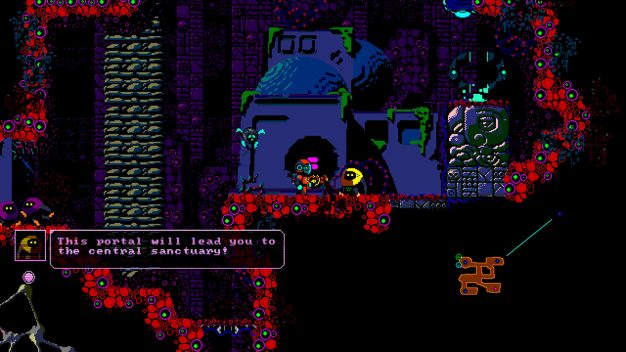 Moving through the varied landscapes often faces you with different challenges. Some are puzzler sections to figure out – or not figure out – or figure out after a long time of just staring blankly at the screen [more on this shortly]. Other sections you’ll have landscaping issues to contend with, fix or resolve, and then there’s also the bosses. The big bosses are so fun! For lack of more detail. The little guys that get in your way, that are splattered around the landscape, they become more fun once you get your pew-pew gun. But the big guys are where it’s at. Obviously, some are trickier than others, but it’s a nice break in the other puzzle/progression aspects of the game. The big one-eyed lookin guy was a favourite. He lunges forward his long grabby arm at random times that caught me off guard. But I found the strategic jumping about, shooting, and then the final pew-pew to his lunging eyeball really satisfying. The bosses, for me, were just fun. Sure, you’ve probably played many before that were similar, but weren’t they fun to pew-pew too? 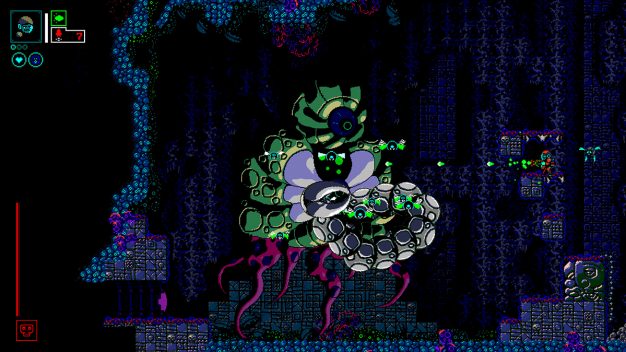 Yep, the puzzles, at times, were tricky. Perhaps, too tricky? Not sure what that says of the game itself or just of my inability to grasp the concept of figuring out. With no real sense of linear direction, I did manage to get a little confused once or twice, on what direction to actually take. I’d also clicked too fast at one point and missed an aspect that held me up. But, that just led me to the OUTBUDDIES community. It seems that not only the games developer, Julian Laufer, is passionate about the community, but also it’s members; some backers of the original Kickstarter. So, with a few OUTer-game-clicks, it didn’t take long to get back on track.

Overall, there’s little I can say about OUTBUDDIES besides, play it. I found all elements of this game only encouraged immersion and the want to progress further ahead. There’s no fear of boredom, because you wont get bored, you’ll just have fun playing a really great game. OUTBUDDIES is available now on Steam.

Fans of the Metroidvania genre will have plenty to keep interest with OUTBUDDIES. Just don’t walk away too early if you get the twang of seen-it-before nostalgia. I promise there’s enough variety once you get going.