Metroidvania, now there’s a term we seem to hear less frequently as time goes by. The genuinely terrifying thing is that some of you will be too young to remember the two games that spawned this term, the first time around anyway. As you all know I love a trip down memory lane so when I saw that Outpost Delta was attempting to modernize the Metroidvania genre I was made up and just had to see what all the fuss was about.

First things first. For those of you that missed the bus on this one, let’s give you a very quick explanation of what Metroidvania is. Metroidvania spawned from a very specific style of gameplay used by Metroid and Castlevania. We’re going back to a time when games weren’t very big and devs had to work out ingenious ways to make them feel longer than they were.

What they did here was either block off parts of a level completely or just make those areas really difficult without certain items and powerups. To pass through these zones you had to collect keys or the required items needed to make you strong enough to succeed. This was clever because it made maps seem much bigger and really made you work for your progression.

Okay so take everything I’ve just mentioned and this is your foundation for Outpost Delta. You play an android called Delta, (surprisingly,) and have to save a research station from invading aliens called The Klaath. As you and the computer are the only living things left on the station that aren’t hostile you’ve got your work cut out for you.

In true Metroidvania fashion, you begin the game with virtually nothing. You start with your blaster and that’s pretty much it. Delta can also manipulate the outpost’s gravity with the help of the station’s AI but you’re going to have to work for this too because it gets taken away from you at the beginning.

Apart from the marauding aliens that have no issue blasting you to bits you also have the station itself to worry about. One of the game’s bosses is buggering with the AI’s control of the outposts’ systems meaning that security measures like lethal laser beams are being lethal to the wrong side. A lot of the station is shot up pretty badly too, so there’s going to be quite a bit to navigate if you’re going to get from A to B. You’ll find items along the way to help but find is the operative word. Getting to these useful little boons is not going to be an easy task.

Right, let’s start with what I like about Outpost Delta. First off, it’s true to form and isn’t trying to fix a formula that wasn’t broken. This game really stays true to the rather large footsteps it’s walking in and this is commendable. This isn’t just mechanical. Graphically. this is a 16-bit title sitting it very nicely in the era it’s paying homage to. Graphics and sound are colorful and fitting for the theme so this is great. 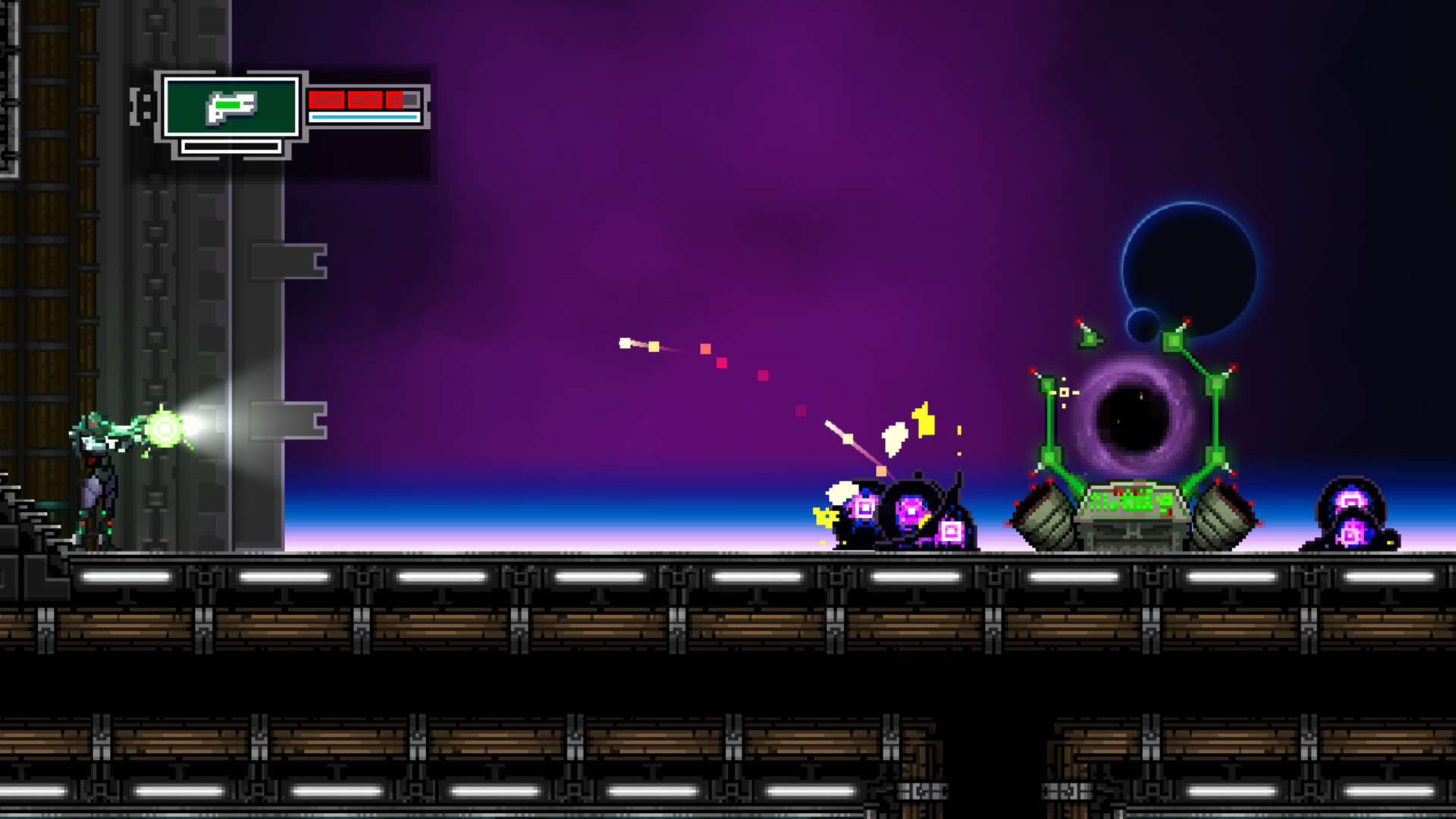 The story-line is simple but well written. This isn’t an RPG so it doesn’t need to hook you and pull you along for the ride. You just need enough story to keep you interested without breaking you away from the action. Outpost Delta gets this balance right for what the game is. Am I going to tell you any more about it? Of course, I’m not! Aside from the obvious spoilers, I’m not here to be your personal narrator. Play the game and find out.

What I don’t like is this game is a little too true to its founding theme in a few aspects that are less appealing. I grew up through the 16-bit era and there is so much to love about it. There are also a few things that can kindly sod back off to the 90s. Crappy control systems are one of these things. The aiming system on Outpost Delta would be enough to make a stormtrooper feel like a crack marksman. I’ll concede that my shocking aim might have been my gamepad which isn’t the best on the planet but just pointing my gun in the right direction felt awkward. 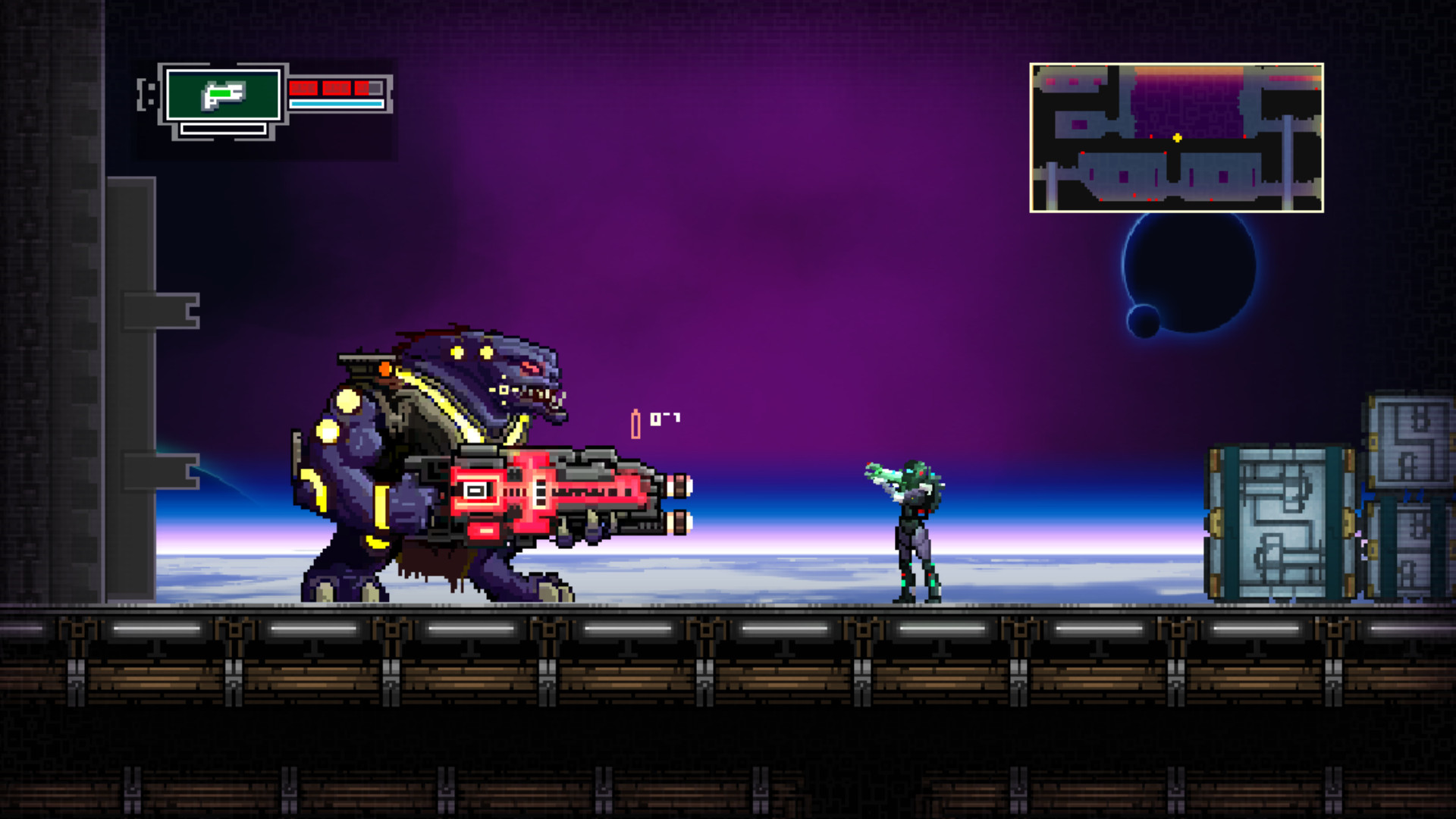 As this is essentially a platformer jumping and maneuvering needs to feel fluid and on point. For me, it felt almost as awkward as aiming and I spent a lot of time missing jumps, getting hit by lasers, and just generally struggling to get around. Again, this might have been down to my controller or just generally my own skill but as a seasoned gamer, I shouldn’t have a problem with the basics and did.

You don’t get a vast amount of life in Outpost Delta. On its own, this isn’t really a bad thing and you can find more blocks to add to your life bar. The awkward controls though meant that I was getting hit a lot and four shots to a game over screen didn’t feel balanced for the difficulty I was facing. Dieing all the time does not for a fun game make. To balance this point there are plenty of health canisters getting dropped about the place but you have to get hold of them without getting killed first. 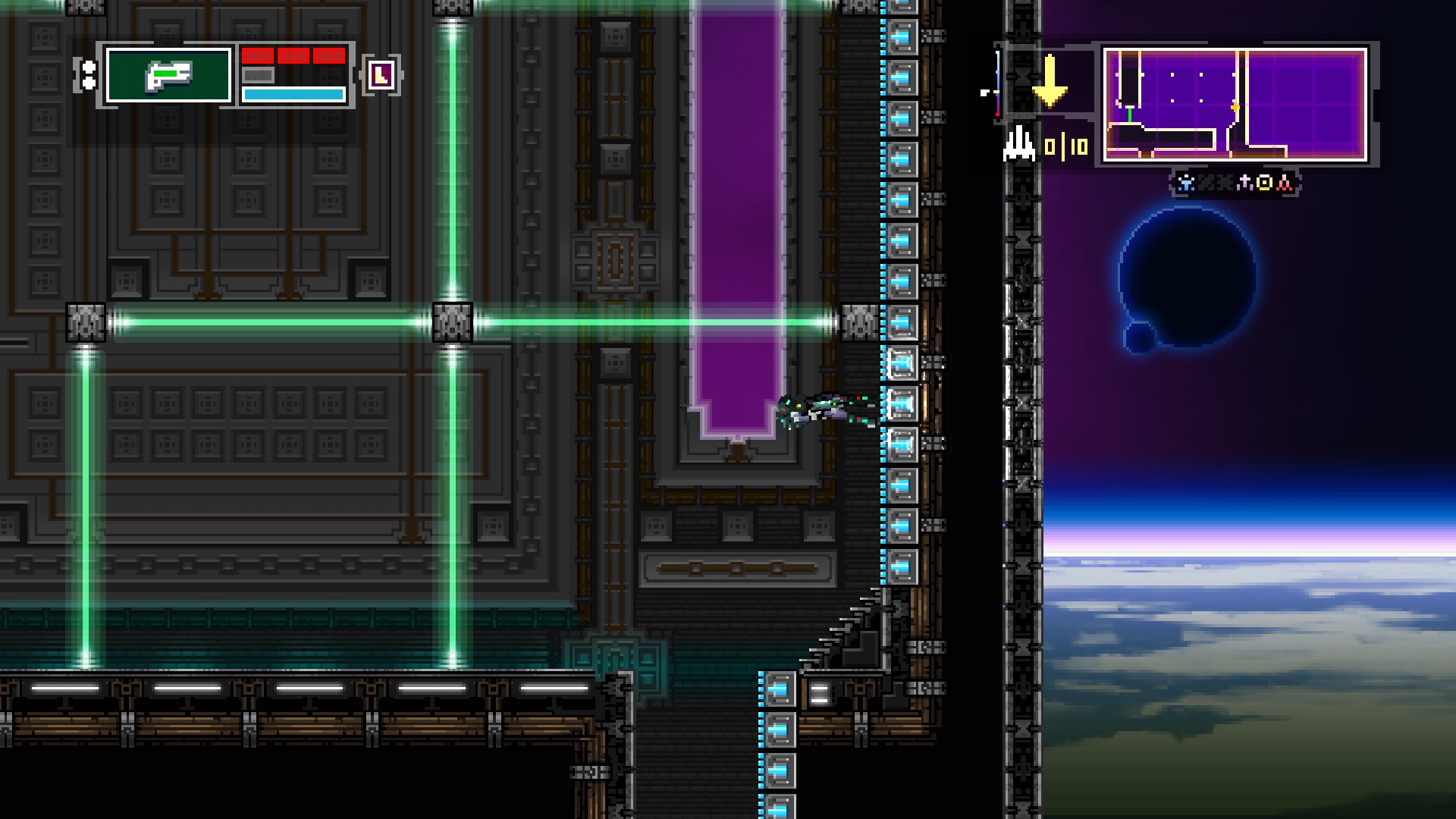 The laser maze of death. AKA Alex’s last shred of patience.

Instead of feeling like a game that was full of fun puzzles and tricky obstacles; playing through Outpost Delta started to feel like a headache. I spent ages trying to solve what in the end was a relatively simple switch puzzle. Having done this and feeling good about myself I got a bit further and met the laser obstacle course of doom. Thanks to the controls and possibly the fact that I’m not fabulous at platformers I just ended up dieing over and over again. By this point, the game had stopped feeling fun and started feeling like stress and I gave in. There are only so many times you can do the same thing over again before it stops being enjoyable and sadly this is where I ended with this title.

I always need to iterate this but I feel it’s massively important. This is my experience with the game. This does not make Outpost Delta bad, in fact it has the makings of a really good title, it just wasn’t for me. Someone with more patience and better platforming skill would probably have a lot more fun.

To sum things up, this is a title that is great in essence. It plays nicely, (apart from the awful aim and slightly twitchy controls,) and the story is definitely there. Outpost Delta also stays true to its roots which is no mean feat. The gameplay was too aggravatingly slow and frustrating though for me to want to play further and this is its biggest downfall. If you like this type of game, and/or you have a lot of patience then I’d definitely give it a whirl. If like me you have a short amount of patience and want a bit more flow or swifter gameplay it might make sense to give this title a miss.

Outpost Delta has the makings of a brilliant title. It sticks to the Metroidvania style it’s embracing and does it really well. If the controls were just a touch more refined and the gameplay didn’t feel as awkward as it does I think it would be getting a much higher score. This is a game for platform fanatics and retro fans but I’m not sure how much there is there to keep the rest of us hooked for long.