I’ve said it before and I’ll say it again; there aren’t enough games that let you be the bad guy. Take the whodunnit genre for instance. We’re all very good at being the virtuous detective, solving all manner of nasty cases while we pump up our egos until our heads resemble balloons. What about the villains, though? Don’t they have stories? Don’t they deserve a chance at not getting caught?! Damn, right they do! This is where Overboard!, today’s little foray into the new release vaults comes into play. Being the bad guy is one thing, getting away with it is a totally different matter.

In Overboard! you’ll be stepping into the shoes of Veronica Villensey. This is one of the few games where I can tell you the story and not ruin everything because it’s all pretty much covered in the introduction. You and your husband are on your way to New York to start a new life in the Americas, whether you like it or not. You’ve pretty much had enough and a nighttime stroll on the deck proves a fortuitous way of shoving him off the side of the boat. So there you go; that’s it, you’re a killer. That’s just where the fun begins, though.

You don’t have a vast amount of time before you dock sans husband; eight hours to be precise. There aren’t that many people on board the boat with you so he’s going to be pretty easy to miss. You have the added hiccup of not knowing whether anybody saw you do him in or whether you left any evidence in the process. This, my friends, is the heart of the game and its bags of fun. 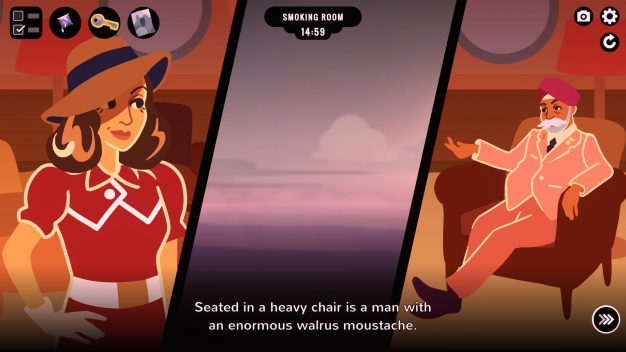 Meet Veronica. To put it politely she’s in a world of crap.

Between waking up the night after the murder and landing in New York you’ll need to cover your tracks. This doesn’t just involve making sure you didn’t leave any traces of the crime behind. You will also have to get your story straight and make sure any mouths that are likely to drop you in it are silenced. This, I assure you isn’t an easy task. After this, you are given other objectives. There’s quite a hefty amount of life insurance on your former husband’s existence and you’d quite like to get paid. Achieving all of this is great, making sure you do it without any loose ends might be another matter. 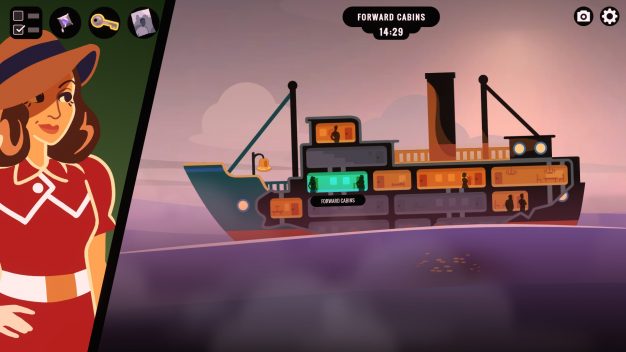 The map. You need to pay attention to what time of day it is.

The first thing I absolutely love about Overboard! Is the characters. This is a game of conversation and memory and the folk you meet onboard the boat aren’t stupid. What this means is that if you’re going to lie you’d better be very good at it. Telling one character one thing and another something very different is a good way to get yourself caught.

These characters talk to each other and will call you out on your shit. If you haven’t done a good enough job of proving that it was all just a nasty accident or, even better, suicide, you’ll be leaving the boat in chains. Framing one of the other characters is also a decent way to go but that requires planning and forethought and you don’t have a lot of time. 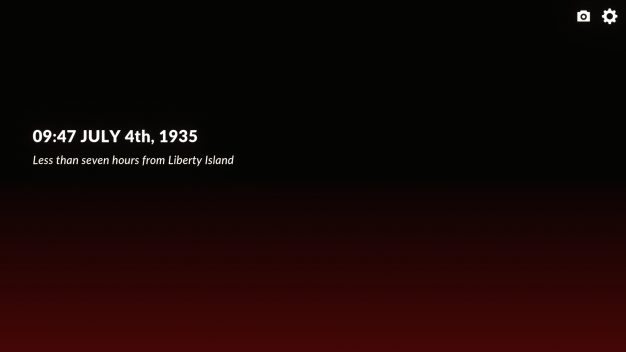 Whatever you’re doing, you have 8 hours to do it. Time stops for nobody.

The other characters you’ll meet along the way also have their own little secrets. In fact, one of the passengers’ trades in them. There’s virtually nothing she doesn’t know and she can tell a poorly crafted rumor from a juicy bit of gossip a mile away. You also have the hysterical young lady who fancies your husband to contend with.

Then there is the issue of whether any of the crew saw you giving him the old heave-ho. You’ll have to take all of this into account if you’re going to get out of this situation with your neck intact. This means thinking two or even three steps ahead of everyone else, and when you don’t know who knows what, this isn’t easy. 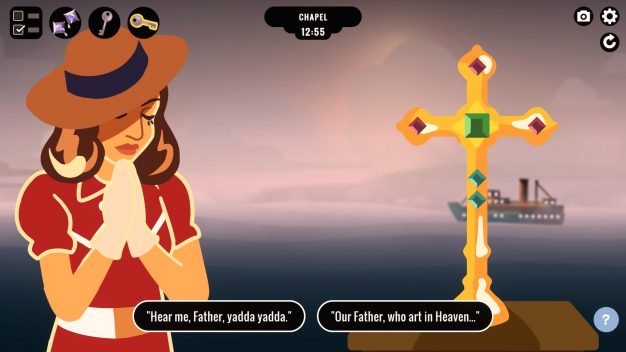 Pray all you like, he’s not going to be very helpful.

The great thing about Overboard! is that you can complete the game in under an hour if you’re skimming dialogue. This isn’t a game designed to be a magnum opus, it’s a game of memory. You might get caught the first time round, and this title will remember the steps you took to land yourself in that position.

If you take a completely different route you’ll likely get a different outcome but that doesn’t mean you’ll succeed. There are so many ways of changing the story that playing over and over again never gets boring. Changing your path is a good idea but you don’t know what new challenges you’ll face in doing so. This is something I really like. 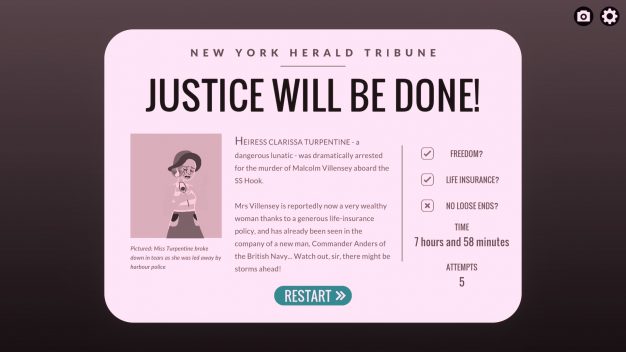 This was a great ending till I got blackmailed.

If we’re talking nuts and bolts we’ll be very remiss in not mentioning the art style. Overboard! Has a wonderfully 1930’s feel about it. This comes across beautifully in the aesthetic. All of the characters and environments have a gorgeously drawn-out and painted look that’s perfectly fitting for the game. This aesthetic carries over to the sound too. The musical score is quite simple but has been perfectly written for the setting.

The cast is very well crafted, too. Each character is different enough to be interesting. This is crucial in a game like this because their stories are critically important in keeping you interested. The character of Veronica is especially notable. She’s sarcastic, witty, and very easy to fall in love with even though you know you’re playing the villain. After this. the UI is tight and the controls couldn’t be simpler so there’s no fault to find there. 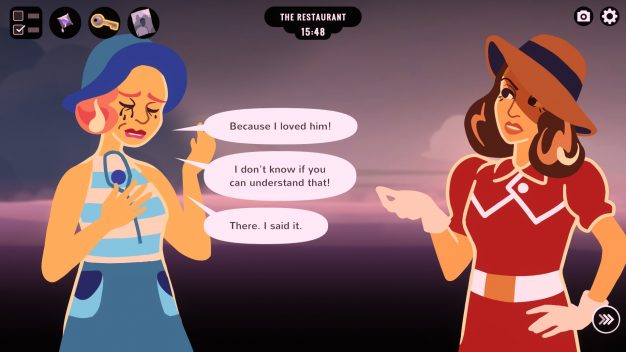 I’m nit-picking to find downsides with Overboard! The only one I really noted was that this title could get a bit repetitive. You might be relatively happy with how you played your last run and just want to make a few small changes. This means that you’ll skip through the dialogue you’ve already seen and just concentrate on the news bits. This is only really applicable if you’re repeating a similar run, though, if you’re trying a totally different tact you’ll obviously get different conversations and therefore read more. This didn’t stop me from wanting to play the game over and do better so it isn’t really a major problem, more of a small niggle. You get mini-objectives to fill as you go so you’re encouraged to try and complete different objectives which will also help to stop the repetition.

All in all, this is a brilliant title if you like more story-driven games. Overboard! Is part puzzle, part playable novel, part memory game. This all combines really well to make a title that’s fun, full of intrigue, and mightily replayable. It’s also great for those of you that don’t have a lot of time on your hands. The fact that you can play the game in its entirety in just one sitting is just part of Overboard’s charm. For me, at least, Overboard! is very near perfect and a must-play for those of you that like this sort of thing.

Getting away with murder!

Overboard! Is a mini-masterpiece on so many levels. Between a brilliantly written story and a fiendish amount of difficulty if you’re going to get the best ending possible this is a game that has to be seen to be believed. This is definitely some of the most fun I’ve had thus far this year and Overboard! might well go down as one of my favorites of 2021. If you like your puzzlers story-driven this is a very good call.