When I went in to pick up Persona Q2 from my local EB Games, I asked them whether this was the last 3DS game on their “coming soon” list and they confirmed that it was, and had been for a good, long while. So, did what may be the Western world’s last ever 3DS game release help the handheld platform go out with a bang? No. No, it did not. 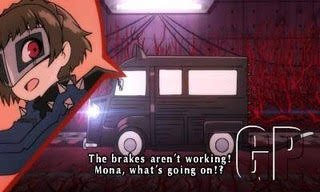 The first Persona Q game (Persona Q: Shadow of the Labyrinth) was released on 3DS back in 2014. The game was unique in that it had the main parties from Persona 3 and Persona 4 meet up in a “school festival” in some kind of alternate universe where they had to try to escape, along with a couple of fun new playable characters unique to PQ. The art style was unique in that it transformed all of the characters into “chibi” versions of themselves, and the situation was unique in that characters from either game have never met before in a canon setting.

Persona Q was absolutely meant to be a fan service-filled love letter to the fans of both games and featured in-jokes and interesting new friendships and rivalries. You could use any combination of characters from either game in your party, which allowed for a lot of diversity in play style. Of course (spoilers for Persona Q: Shadow of the Labyrinth ahead) the entire situation was wiped from all of the characters’ memories as a deeply unsatisfying way to end an otherwise unique and truly enjoyable game. Persona Q2, on the other hand, saves some time by not even waiting until the end of the first dungeon to be deeply unsatisfying. 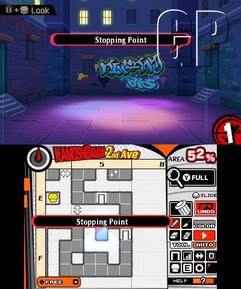 As a longtime Persona fan and Persona Q fan (in spite of its bad ending), I was very excited that Persona Q2 was finally coming to the West. I had heard that sales in Japan were incredibly poor despite the country’s deep love for the Persona series in general, but I was not deterred. Persona Q‘s unique blend of first person dungeon crawling, lower-screen map drawing, puzzle-based gameplay wasn’t well-received by everyone in the first instance, so I wasn’t particularly surprised. Plus, the team from Persona 5 were going to be included this time, and the female protagonist from Persona 3 Portable, so that was an exciting update.

The game starts with the Persona 5 crew being unexpectedly transported into a strange cinema where dungeons are “movies” that have to be played through in order for the story to progress. As each movie is completed, one of the many locks on the main, mysterious door in the cinema is removed, potentially assisting their eventual escape from the labyrinth. All of the movies have features from other games in the series, such as the first boss being a variation of Kamoshida from Persona 5, and the second dinosaur-themed dungeon being called “Junessic Park” (a reference to the shop, Junes, from Persona 4). 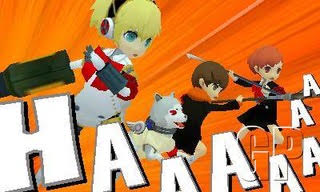 You start with all of the party members available through Persona 5: Protagonist, Morgana, Ryuji, Ann, Yusuke, Makoto, Futaba, Haru, and Akechi. That’s standard JRPG fare, having about eight characters and only being able to select 5 for your actual party (divided between 2 or 3 members in the front or back row during battle). However, during the first dungeon you pick up your next character – Persona 3 Portable protagonist. She offers the same magic set as Ann but with more of a focus on physical attacks. As in mainline Persona games, navigators (Futaba, Rise, Fuuka) provide support from the sidelines. All party members, including the protagonists, are locked into their basic Personas but gain the ability to equip a sub-Persona to maximize skill coverage to hit enemy weaknesses.

Then in the next dungeon, you eventually acquire all of the party members from Persona 4: Protagonist, Yosuke, Chie, Yukiko, Kanji, Rise,  Naoto, and Teddie. While the skills offered by each party member differ a little (e.g. Chie’s ice attacks are predominantly phys + ice attacks rather than actual magic), it’s really all the same thing with a slightly different coat of paint. Readers of this review may already seen a problem – this is a lot of party members. Consider that later in the game, it’s almost a certainty that the player will acquire another eight party members in the form of the Persona 3 team, and the system quickly becomes unworkable and overwhelming. 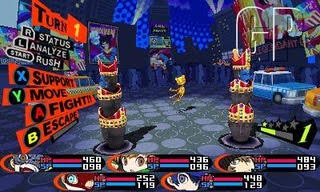 The game does not have an EXP share type ability, so your party members that you leave behind receive no experience. Side quests regularly require specific party members to be present to reap certain rewards,  so there’s good reason to try to keep everyone evenly leveled, but it’s also incredibly important to have proper skill coverage. The constant balance of equipping and fusing new sub-Personas, keeping everyone evenly leveled, swapping over (or having to buy new) equipment to make sure everyone is geared up properly…is honestly exhausting. I realize I could just leave some characters in the dust (and indeed I did – I hate Teddie and never used him once) but I also believe it’s a failing of the game to not give any kind of left-behind EXP bonus to help out the zoo of party members you’ve been asked to babysit.

Persona Q2′s persona fusion system is aggravating, as navigators are able to equip sub-Personas to offer more useful skills during battle or while dungeon crawling. However, navigator skills are evenly distributed onto personas along with standard battle skills, meaning that sometimes one must choose between using a persona as a navigator persona or a good battle persona. I wholeheartedly believe that this was a choice made to increase the difficulty in the game, but it serves to do nothing but irritate the player. 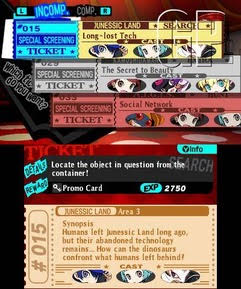 As a fan of Persona Q‘s dungeon and battle system, I was disappointed to find that not a lot had changed. There are certainly some small quality of life improvements that have been implemented here and there, but the core gameplay remains very much the same, despite the massively expanded cast. Systems such as Persona 5‘s Baton Pass have been implemented (though changed slightly to match PQ‘s gameplay), and the navigators regularly remind you to use it, but if you have even the slightest concept of how to hit enemy weaknesses, it almost never becomes necessary to use. After four years and a new handheld, I would have expected more innovation.

The next issue comes in the form of EXTREME FLANDERISATION. For those who are unfamiliar, “Flanderisation” is what occurs when a character with a particular quirk or interest slowly becomes consumed by said quirk or interest until they’re less of a character and more of an embodiment of whatever that thing happens to be. Chie is the most obvious example in Persona Q2, wherein her love of meat is referenced by her, or others, literally every time she shows up. 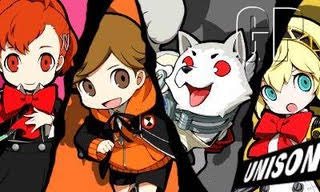 Unlike the first Persona Q game, the in-jokes and character interests aren’t just liberally sprinkled throughout the game. Instead, the player is forcibly held down and buried in them. Part of what made me stop playing the game was how painful the character interactions became. The only genuinely interesting cross-game interactions come in the form of the new combo attack system that usually pairs two previously-unacquainted characters together to unleash a devastating attack. Those are few and far between.

The dungeons are long and with very little variation. The interactions between the characters and the puzzles serve to do nothing but slow things down in ways that feel so completely unnecessary. At one point, the team must lure a dinosaur with some meat. A meat container is located, and that should have been the end, but instead a lengthy scene ensues where the team finds ingredients, argues constantly, cooks the meat, and finally brings it to the dinosaur. The entire time I was just waiting for the stupid scene to end, because it was just chock full of Flanderisation and weak, uninteresting dialogue. 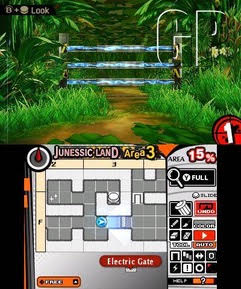 The drawn graphics, such as the character profile pictures in the menu, are crisp and very cute. I can’t fault those. Maybe it’s just because it’s been a while since I last played my 3DS, but the character models look a little blander and more poorly constructed than those in the previous game. There’s regular lag during battles with more than three enemies on the screen, and well-known enemy types were misnamed on more than one occasion. The whole construction of the game just feels lazy, though there are the occasional gold nuggets of pretty design and interesting mechanics.

The music is this game’s main redeeming quality – it is absolutely outstanding. While playing what I did play of the game, I had multiple tracks stuck in my head and on repeat on YouTube when I had the option. Persona 5‘s main vocalist does an outstanding job, as do Persona 3 and Persona 4‘s vocalists when they join in. The opening cinematic music is just as jazzy and enjoyable and will undoubtedly get stuck in your head. I can’t praise the music in the game enough. It’s varied but honors the originals when remixes are used, and all of the original music is absolutely wonderful. If only the rest of the game would follow suit. 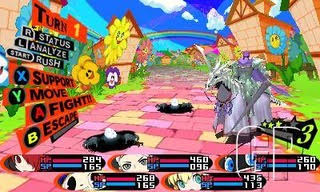 In the end, I couldn’t finish Persona Q2. I couldn’t even get to the point where I received my third and final batch of characters. Based on what I could see in the menu, I imagine there’s a system wherein you can make use of and perhaps gain experience for your unused party members, which at that point would number above 10. However, the game was too trying, too weak, and too disappointing to continue with so that I could find out. I am deeply disappointed with Persona Q2, and I highly encourage veteran Persona fans to think twice before torturing themselves with this game.

If you’re looking for the Persona Q experience with an added choice of Persona 5 flavour, I wouldn’t recommend choosing this game to get your fix. Well-written fanfiction would be quicker and less boring.