No, you haven’t clicked onto the wrong site; TVGB is branching out with a movie review. I’m not sure how often we’ll do these, but since a movie just came out that’s based on a game I’ve reviewed for the blog, it seemed like a perfect opportunity. So today, we’re talking about Pokemon Detective Pikachu (that’s how the name is supposed to be written, apparently.) Opinions on the trailer had been mixed, but I was in from the moment it was announced. 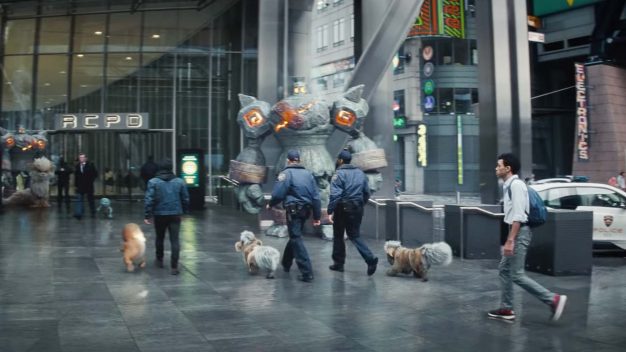 The idea of a live action Pokemon movie might seem crazy, but the world and the visuals are actually the best part of the film. The Pokemon all look really cool, and just realistic enough to fit in without being creepy. Each one is rendered how you’d expect, with visible fur or scales, and they didn’t try to include anything too difficult to render in a realistic style…except Mr. Mime. But even his depiction makes sense. I’m also happy to report that there are Pokemon in the movie that aren’t shown in the trailers, so there are still surprises in store. Every generation is represented with at least one Pokemon, though there is unsurprisingly a focus on the first. The Pokemon who are supposed to be cute are very cute, even with the more realistic style. Obviously the cutest character for most will be Pikachu himself, though I found the fluffy Pancham even more adorable. There’s even a Pokeball shown in an early scene, and it looked so cool I wished I could go out and buy one.

It’s clear from the first scene that the people involved in making Detective Pikachu respected the source material and its fans. There’s fan service in almost every scene that takes place in Ryme City, a location taken straight from the Detective Pikachu game, with signs and screens referencing all sorts of Pokemon and other elements from the series. There appear to be actual cards from the Pokemon Trading Card Game used as props, one location has a bunch of evolution items from the series in the background, and there’s even a great throwaway line from Pikachu that will only make sense to dedicated fans.I also appreciate how well the movie matches the game, even if it is a loose adaptation; I would have been unhappy if the Hi-Hat Cafe didn’t appear by name, for example. 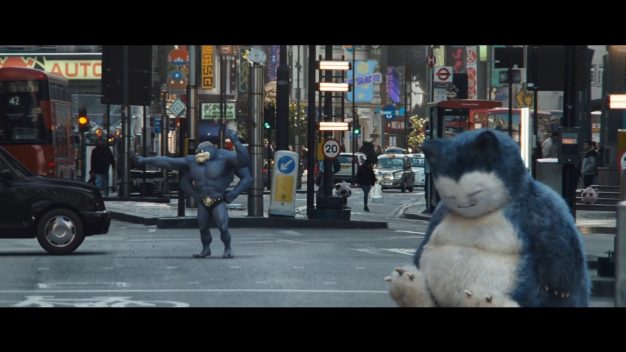 The main actors clearly care as well. Despite trepidation from some fans, Ryan Reynolds does a great job as the eponymous detective. It’s a different take on the character from the game, for better or worse, but I was impressed with how well he made it work. It didn’t fit the same detective vibe as the original, and I am slightly disappointed that they didn’t go that route, but what we got is perfectly fine. And it can only be considered a good thing that Justice Smith played a very different version of Tim Goodman from the original. As much as I enjoyed playing the game, Tim might as well have been a robot. In the film, Tim is a loner with no interest in Pokemon; he’s clearly a character in need of a journey, unlike the game version. Smith plays the character with emotional depth and humor, without which he simply wouldn’t work. It takes some serious skill to play a role like that in a movie like this and do it so well. I wish I could compliment the other actors as well, but whether it was a matter of acting, directing, or writing, the other characters in the film felt over-the-top and cheesy. I did enjoy the new take on the character of Lucy (based on the character of Emilia from the game), who was previously almost as dull as Tim, but the role just wasn’t played well. The only actor in a smaller role to whom I have to give credit is the legendary Ken Watanabe, who brought his skills to the small role of Lieutenant Yoshida. 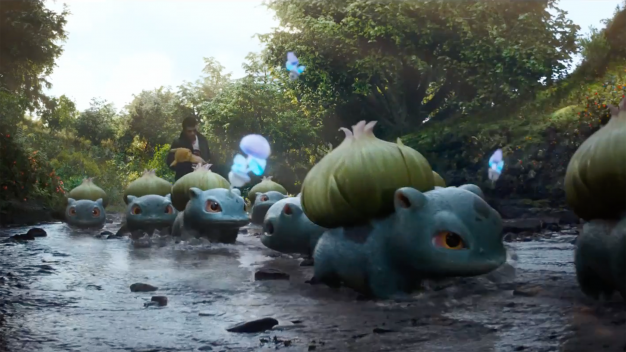 One thing that helps make the characters work is the humor, which is key to helping a movie like this work. Detective Pikachu remains a funny character, and there are enough funny lines to keep things light. They didn’t spoil all of the jokes in the trailer, which is an achievement in itself these days. The dialogue varies, with the interactions between Tim and Pikachu feeling very natural, while other characters are exaggerated. Interactions with Pokemon are written in ways that make sense, from Lickitung licking Tim’s face on the train to the miming between the main characters and Mr. Mime. All that’s left to talk about is the story, and unfortunately, this is the weakest part of the film. The plot more or less follows the game; Tim Goodman learns about the death of his father, and travels to Ryme City, where Pokemon and humans coexist. There, he meets a talking Pikachu detective who helps him search for answers about his father’s supposed death. The main story beats from the original are all present, but the ending is different in a few ways that I don’t like. For one, the fate of Detective Pikachu is the opposite from the events of the game. For another, the villain’s goal is totally different, and it’s pretty weird; I have mixed feelings about the main element of it, which I won’t spoil here. 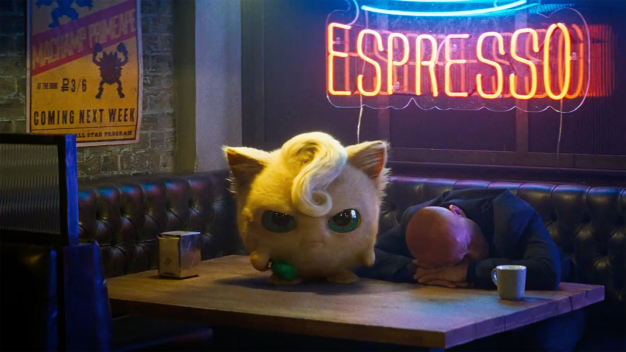 I can actually look past the changes to the ending; that’s not the biggest issue here. The biggest issue with Pokemon Detective Pikachu is the pacing. Everything seems to happen far too quickly. Action scenes with cool Pokemon end almost as soon as they begin, which is disappointing for people expecting to see a live action take on Pokemon moves and battles. The characters don’t really do much detective work, as much of the important information is just given to them. The film would definitely have benefited from a longer run time, but I understand that they wanted to attract kids and parents to see it. Still, given that the word “Detective” is in the title, you would think that Tim and Pikachu would discover most of the information on their own. And given how prominent Charizard and Greninja were in the marketing campaign, you’d expect them to have a lot more screen time than they did.

Overall, I left the theater happy. There was some good acting and humor, and I loved the world that the film created. Disappointing as the story may have been, the filmmakers did right by the world of Pokemon, and for me, that was always going to be the most important thing. If you’re a Pokemon fan, you should check out Pokemon Detective Pikachu. If you aren’t, well, there might not be much in it for you. Regardless, I think we can crown Pokemon Detective Pikachu as the first good movie based directly on a video game, and that’s a title I wasn’t sure any movie could possibly earn. I hope producers of future game-based movies take to heart how much love and care for the Pokemon franchise went into making Pokemon Detective Pikachu, and bring that same level of dedication to other games. I’m looking at you, Sonic the Hedgehog, but that’s a subject for another review. For now, just go see Pokemon Detective Pikachu if you have any interest in the franchise, and try to get through the Sonic trailer that plays before it.