It’s easy to see how the popular game, memed as Amogus, has a ton of similarities to Project Winter, a game recently ported over to the Switch. It is a social deception game after all, in which the premise is that there are enemies among the team who are intent on sabotage, and one of those enemies could be you. Project Winter, however, mixes the social deception aspect with a survival element, that being the harsh wintry weather and its environment.

Anyone who has played the sussy baka game may think that playing as one of the traitors (i.e., the imposter) will be easy: just pretend to work on the objectives (i.e., tasks), find an opportunity to attack, and then kill. However, it’s not like that in Project Winter. First, one-shot kills don’t happen here. Traitors must hack, hack, hack with their axes or weapons to dispatch a survivor. Second, survivors can fight back. Yes, as a survivor, you’re not so feeble with the traitors; you can fight back and take care of the traitors yourself (but more than often you’re going to need the backing of the other survivors to do so).

Like the OG sus game, in Project Winter there are things the traitors have on their arsenal that only they can do. They are able to unearth caches filled with traps to use on the survivors. They are also able to craft lethal weapons like guns which can make the one-shot kills, but it’s often saved for the late stages of the game since the necessary items to craft these are quite hard to get. On the contrary, the survivors are able to link up and vote out who they may suspect to be a traitor, and a majority vote kicks that player from the game. 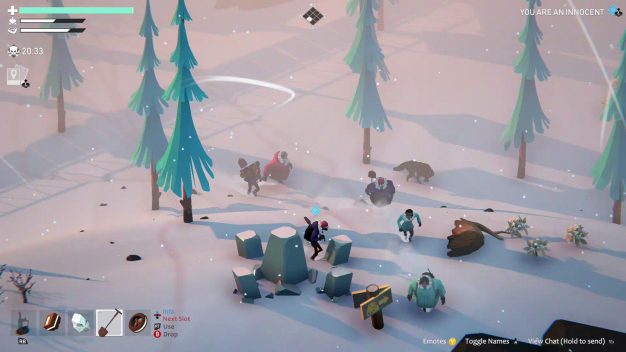 What can overwhelm players with Project Winter will be the survival element. Along with the standard health bar, there are two other statistics you must worry about: warmth and hunger. Both drain constantly while navigating through the harsh winter weather, and both survivors and traitors must be wary and work to sustain themselves, since running out of one of the bars mean health will deteriorate. For survivors, it’s figuring out how to cook food and keep the fire going along with completing their objectives. For traitors, it’s figuring out how to go along with the survivors long enough to find a window of opportunity for offense.

Figuring out these new elements coming from Amogus will be a challenge. There’s a lot to figure out, and while there’s a tutorial, it’s not as robust as it could be. More often than not, other players will be the ones teaching you the ropes of the game. Once you do get a grasp of how Project Winter works, the fun factor goes up a lot. 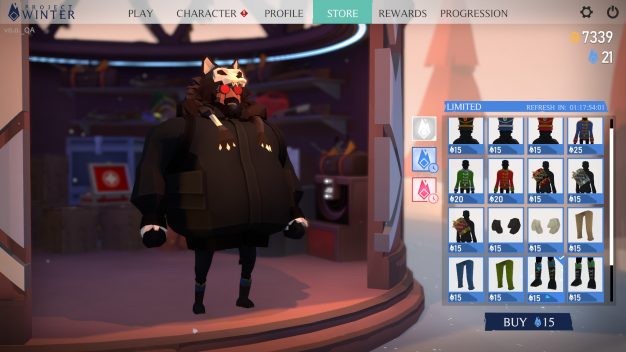 Another problem that I encountered is the fact that the game seems unbalanced towards being a traitor. It just seems much easier to dispatch survivors (and actually more fun) than surviving and completing objectives. Granted, most of the parties where I’ve been part of the traitorous group are where the survivors didn’t know how to group up. Maybe they were so used to the individual tasks the other game is so used to doing, but in Project Winter, working as a group as survivors seem to be the key to winning.

Overall, Project Winter is a game to check out if you’re getting bored of playing the OG social deception game. It adds new layers of gameplay elements as well as really solidifying that teamwork makes the dream work. Just know though, that there is a slight learning curve that takes a few games as both roles of a survivor and traitor for you to finally start enjoying the game.

Survive the Winter or Kill Your Friends Incognito

-Slight learning curve to figure out how a game works