You know how when you worked for the worlds biggest arms industry corporation and one day you show up to work and they tell you that they no longer need your services?  That slap in the face to one of its most loyal employees who would assassinate, extort, infiltrate and even torture whoever you were directed to anywhere in the world.  However, instead of getting back at your former employer, you decide to disappear for twenty years and escape to a secluded monastery deep in a nondescript snowy mountain range.  But they just can’t let it go that you have moved on and they try to take you out once and for all.  You finally get your chance to slap back as you lay down a vicious three-piece combo on a set of exposed rib cages.  If this has ever happened to you, then you will absolutely love Redeemer on PC from Sobaka Studio, a small team of five developers based in Moscow and Kaliningrad, Russia.

Set in an old monk’s monastery, you take on the role of Vasily as he attempts to get his message across that he just wants to be left alone.  Being the trained mercenary that he is, he is totally capable of taking out his enemies with his bare hands when necessary.  More often than not, though, there are melee weapons lying around that you can use like knifes, batons, fire axes, hammers and many more.  If you need a weapon with more punch, then you can pick up a pistol, shotgun or machine gun to get the ultimate message across to your pursuers.  In this top-down brawler, how you play and with which weapons is up to you. 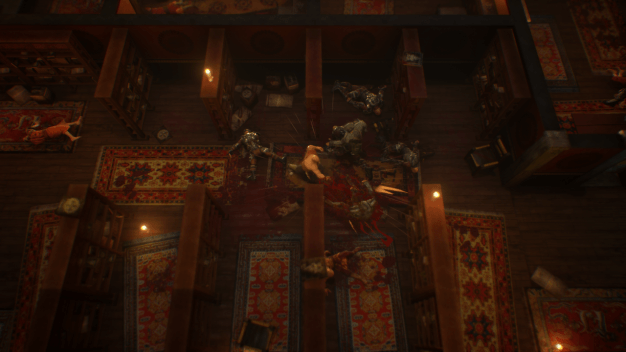 Levels in Redeemer are fairly linear and are designed with a one-way-in and one-way-out type of build.  There are only slight variations in the paths that you can take as you make you way through to the end.  The paths are mainly tight corridor’s that makes the action feel intense and visceral because you only have so much room to maneuver as you splatter your enemies guts all over the wall.  If you have your back up against a wall, you better have a few tricks up your sleeve because the creatures that are coming after you will give you no quarter.  You need to think fast on your feet and remember where extra fire power and melee weapons are located. 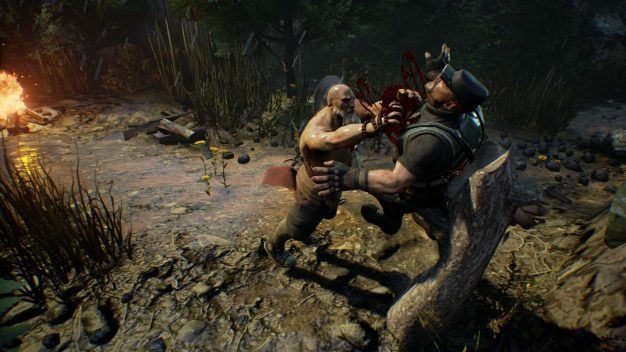 A conversation about how the weapons system works in Redeemer is definitely warranted.  Like other high-profile triple-A games as of late, your weapons will degrade over time.  You can only stab, swat, bash or crush your enemies so many times per each type of weapon.  Guns will hold a certain number of ammunition and once they run out, you need to find another one.  It would have been nice to just walk over a particular type of weapon and have that ammo transfer from that weapon to yours but that just wasn’t the case.  You have to physically swap out the same weapon or pick up a totally different weapon if you want more ammo. 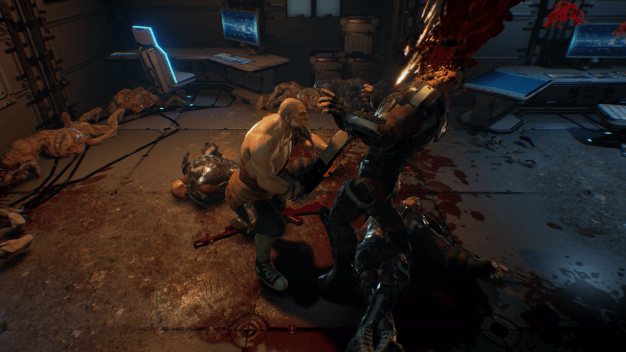 Sobaka Studio is showing that with Redeemer, you can make a very compelling and fun game without the large budget that larger studios throw at their game designers these days.  This game isn’t for everyone, especially if blood and violence make you squeamish.  However, if this is your type of party then you will definitely find a gem here.  The soundtrack is awesome with some very apropos tunes that blare as you dispatch of your enemies as well as the sound effects of bones crunching as you bring a wrench down on the skull of an ugly mutated monster.  The game is fun, first and foremost, and worth the modest expenditure.

Cracking spines with your bare hands never gets old.