Renowned Explorers: International Society is the latest game to come out from developer Abbey Games. This game takes the player on a global search for fame and riches , throwing plenty else at them along the way. If your childhood was filled with dreams of becoming the next Indiana Jones  – the adventurer part, not the professor – then this is the game for you. 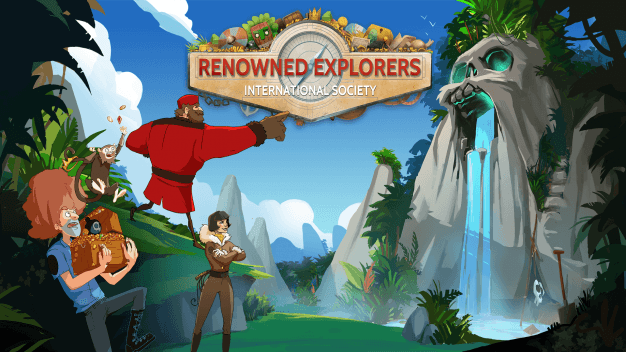 Build your crew of international explorers and set out on expeditions to unique locations around the world in search of legendary treasure. With every treasure you find, your “Renown” builds, setting you on the path to becoming the most famous explorer in the world! On your travels, your crew members’ unique skills will help you get information from locals, make it through traps, and get rid of anyone and anything keeping you from the treasure.

What first drew me to Renowned Explorers: International Society was the game’s visuals. Your expedition crew travels across procedurally-generated maps and come across unique characters and enemies, all presented in a colorful, almost cartoon way that coveys the unique qualities of the locations and the people. Encounters with aggressive locals or wildlife are full of unique action animations; whether a member of your crew is insulting someone or lecturing them, the graphics and design of this game keep exploration as exciting and interesting as it should be. 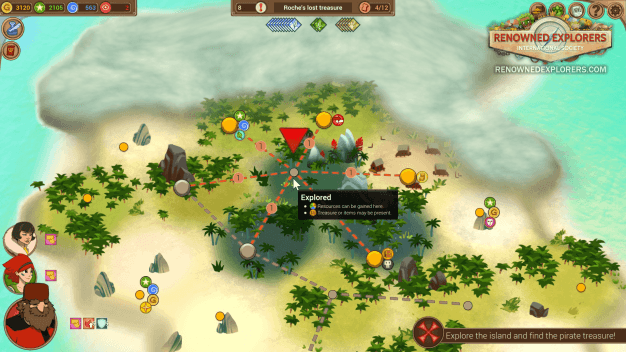 Nothing like picking up some spare change on your tropical get-away.

Once you choose your mode and difficulty, the time comes to build your crew. Right from the start, Renowned Explorers: International Society makes it clear that this is a game of strategy as much as it is a game of adventure. Twenty unique characters from around the world stand ready to bring their unique skills and traits to your expedition. These characters fall into four classes: scientist, scout, fighter, and speaker. Your first choice will be your crew’s captain. The captain imparts a unique perk to the crew that will apply to each expedition they set out on. Next you select two more characters to follow your trusty captain. 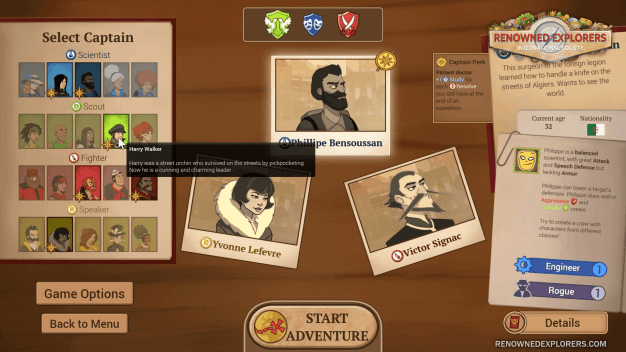 Build your own soon-to be world famous crew.

Another important part of Renowned Explorers: International Society that you can see right from the start is the game’s heavy amount of replay potential. In fact, the game encourages you to experiment with its many features. A message to the player makes this clear as soon as the game opens by explaining that the game is designed to be played multiple times, encouraging the player to “kick back and enjoy the adventures ahead…even if your expedition turns into a complete disaster!” One playthrough only takes a couple of hours, so you can explore the hidden wonders of the world and be home in time for supper. On top of that, each time you play, everything from your crew, the characters you meet, the treasures you find and the maps you explore will be different.

Once you’ve built your crew, its time to set out on your first expedition. Exploration consists of leading your crew across a map toward the big treasure that brought you there in the first place. Of course, it’s never that easy. If it were, you wouldn’t be reading this. Your crew only has a limited number of supplies to keep you moving around the map. Along the way, your crew will face a number of challenges – anything from appeasing locals to making your way through trap-ridden pyramids. When you find yourself up against one of these challenges, it’s up to you to select which character will carry out certain actions. Their likelihood of success is based on their unique skills. 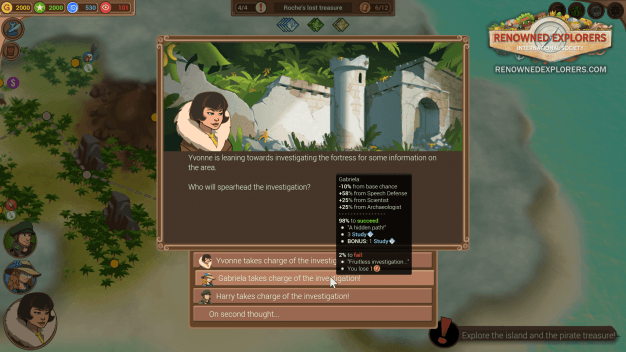 A variety of challenges means everyone gets a chance to shine.

Occasionally when exploring you may encounter locals or animals. Encounters are different from challenges in that instead of using a skill to complete them, you have to defeat your foes using either physical force or by dealing blows to their spirit with your words. That old middle school defense, “Sticks and stones may break my bones but words will never hurt me” doesn’t apply to adventuring. Encounters take place on their own randomly generated maps populated with who or whatever you’re up against. The members of your crew move around and use skills that relate to one of three moods: aggressive, devious, or friendly. Physical attacks are taken as aggressive while verbal skills may be either friendly or devious. Each skill you use contributes to the overall mood of the encounter which takes the enemies mood into account. At the end of the encounter you win according to your crew’s dominant mood, each type of victory having unique consequences and rewards.

A few of the difficulties that I experienced in encounters are that a crew member can’t split their movement up and they can’t move after they attack. A crew member, for example, can’t move half of their allotted spaces, insult a sheep, then move away. They also can’t insult a sheep first and then move away. However this isn’t a major issue, it just makes the encounters require that much more strategy on the player’s part. 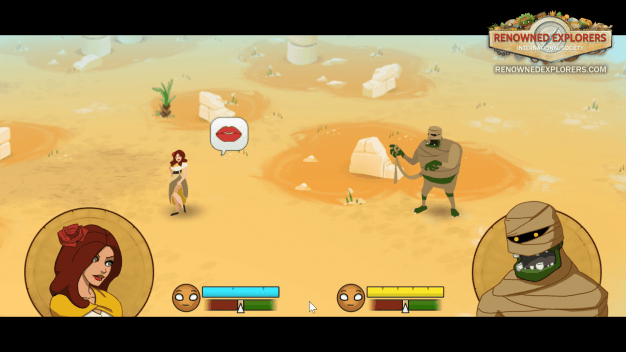 Once you’ve made your way across the map leaving a trail of destruction or friendship in your wake and snatched the legendary treasure, its time to return to your headquarters in London. When you get back, your crew can use their status to build an entourage of interesting and useful people who help the crew and buy equipment to prepare your crew for whatever the next expedition may hold. It’s at your base that you can also unlock scientific achievements that help the crew out by imparting various benefits. 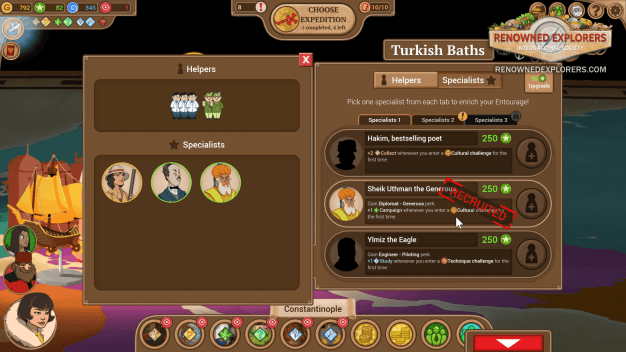 Use your status to recruit the members of your entourage.

This game is well worth the buy. The playthroughs themselves are short, but there is so much room for variation and experimentation on each playthrough that I really don’t think you can ever have the same experience twice. If you’ve ever wanted to explore the far reaches of the world without having to deal without roughing it, check out Renowned Explorers: International Society on Steam.