Do you ever get fed up with being the hero?  Have you found yourself itching to be the bad guy every once in a while, and put those goody two-shoes in their rightful place? Well Nerdook Productions attempts to scratch that itch of yours with Reverse Crawl, a tactical, turn-based RPG developed by a one-man studio.  It’s his first foray into PC gaming after creating a multitude of browser-based games on Kongregate. 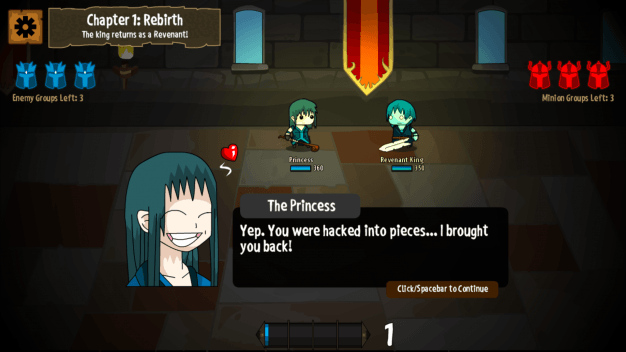 The game’s premise is that instead of being the heroes valiantly cutting through swaths of enemies through a dungeon, you are the one setting up the dungeon, full of evil minions to fight troublesome heroes.  You control a princess dabbling in the arts of necromancy, who has raised her deceased father – a deposed king — from the dead to take back his throne.  This “Revenant King” and his daughter the princess must find various factions of goblins, orcs, and warlocks to fight against the usurping Red Queen and her elite guard of heroes.

Gameplay can be very fun: you pick a number of differing groups you’ve accumulated during your quests to face off against multiple waves of knights, druids, mages, and the like to find treasures and upgrades that will ultimately help you defeat the Red Queen.  One of the features I very much enjoyed is that you have the opportunity to pick your path.  Every new quest, or Chapter (of which there are 24), allows you to choose between three areas, recruiting new minion factions and finding new abilities.  Concluding every other quest also gives you the opportunity to put points into an upgrade tree, where you use points you’ve gained to enhance your minions and skills, or permanently hinder the enemy. 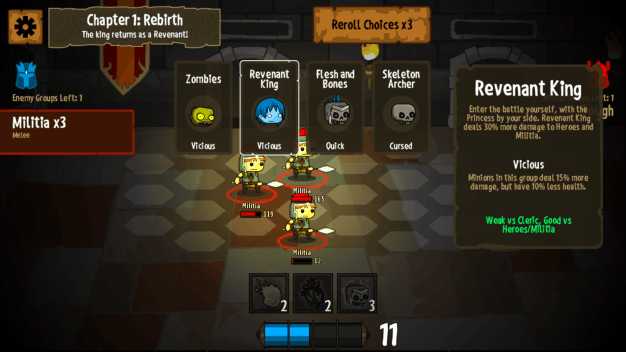 Battles are turn-based, and take place on a hexagonal grid where each unit in your and your enemy’s squad moves and attacks either physically or by using powers.  Your powers are tied to the amount of Threat you generate throughout the battle, and they allow you to heal your team or cast spells such as Magic Missile and Fireball.  Be careful though, every time you use a power, the amount of Threat required to cast it again that battle increases, and Threat can be difficult to produce.

One of the complaints I had during each chapter was that the battle map always felt a tad too small to efficiently utilize many of the available minions tactically.  During my play-through, combat seemed to give a huge advantage to close-quarters fighters.  Melee fighters are generally heavier hitters, and cozying up next to ranged fighters limits their attacks to adjacent enemies only.  Although using powers is still an option in these cases, I tended to ignore ranged units unless they were specifically better against a particular wave of enemies.  A bigger map may have balanced out the ranged fighters, allowing them to be used more often. 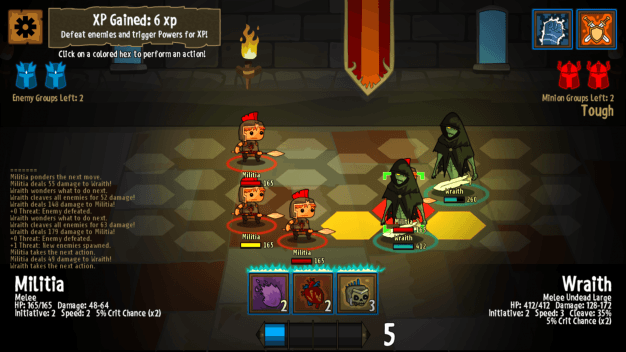 The biggest issues I had with Reverse Crawl were two-fold.  First, the game was very short.  I was able to complete the game in a matter of five hours, and that is including repeating some of the more difficult battles I initially lost.  The many decisions available throughout the game could possibly alleviate the length issue some, since each play-through yields different choices, potentially producing altered outcomes in the New Game+ mode.  However, battles became similar and monotonous enough towards the end of the initial game that a second play was not appealing to me.

The second issue I had, and the most disappointing to me, was that although the game advertises that you are the dungeon and not the hero, it never felt like you were preventing good guys from successfully raiding a dungeon.  The story is not quite fitting for a villain, either: you are an overthrown king trying to take his throne back, with no indication that you were ever a bad person.  You are merely consigned to using help wherever you can get it, in the form of dark elves, zombies, and trolls.  Furthermore, you are never setting up an actual dungeon.  Just like in any game playing the hero, you crawl through the dungeon looking for new stuff, ultimately meeting up with your adversaries in the interim.  If Reverse Crawl was a little more truthful, I would have gone in with different expectations and perhaps not been so let down waiting on something that never came. 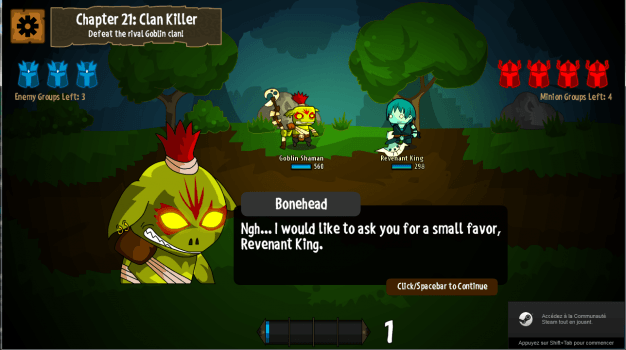 Despite my misgivings, I did somewhat enjoyed Reverse Crawl.  The writing was goofy and lighthearted enough to engage me and keep me playing, and I was continuously interested in finding all the various groups I could use in battles.  Moreover, it was all developed, coded, and animated by one guy!  That takes some dedication definitely worth recognizing.  The battles could have been a little less repetitive, and the difficulty tweaked some, but it was by no means unplayable.  The game is available on Steam, and at a $5.99 price point, even five hours of gameplay makes it worth checking out.  If you are a fan of turn-based games with a little bit of strategy to them, you can’t go wrong with Reverse Crawl.

Reverse Crawl: Not as reversed as advertised

Although Reverse Crawl promises – but ultimately does not provide – a reverse dungeon raid, a fun script and colorful animations give the game some qualities worth looking into.