So there I was, machine-gunning my way through three man-eating bunny rabbits, trying to get to my three comrades fighting off a base fire, when these raiders popped up out of nowhere and started busting down the walls! Sounds like the middle of a fantastic story, right? Well, in RimWorld, it’s just another day. RimWorld is a colony simulator game by Ludeon Studios. While it has been in early access since 2013, it was not fully released until this month. With all of the updates and additions in the Alpha version 17, though, players who experienced the early access versions may want to jump back in for an all-new experience. 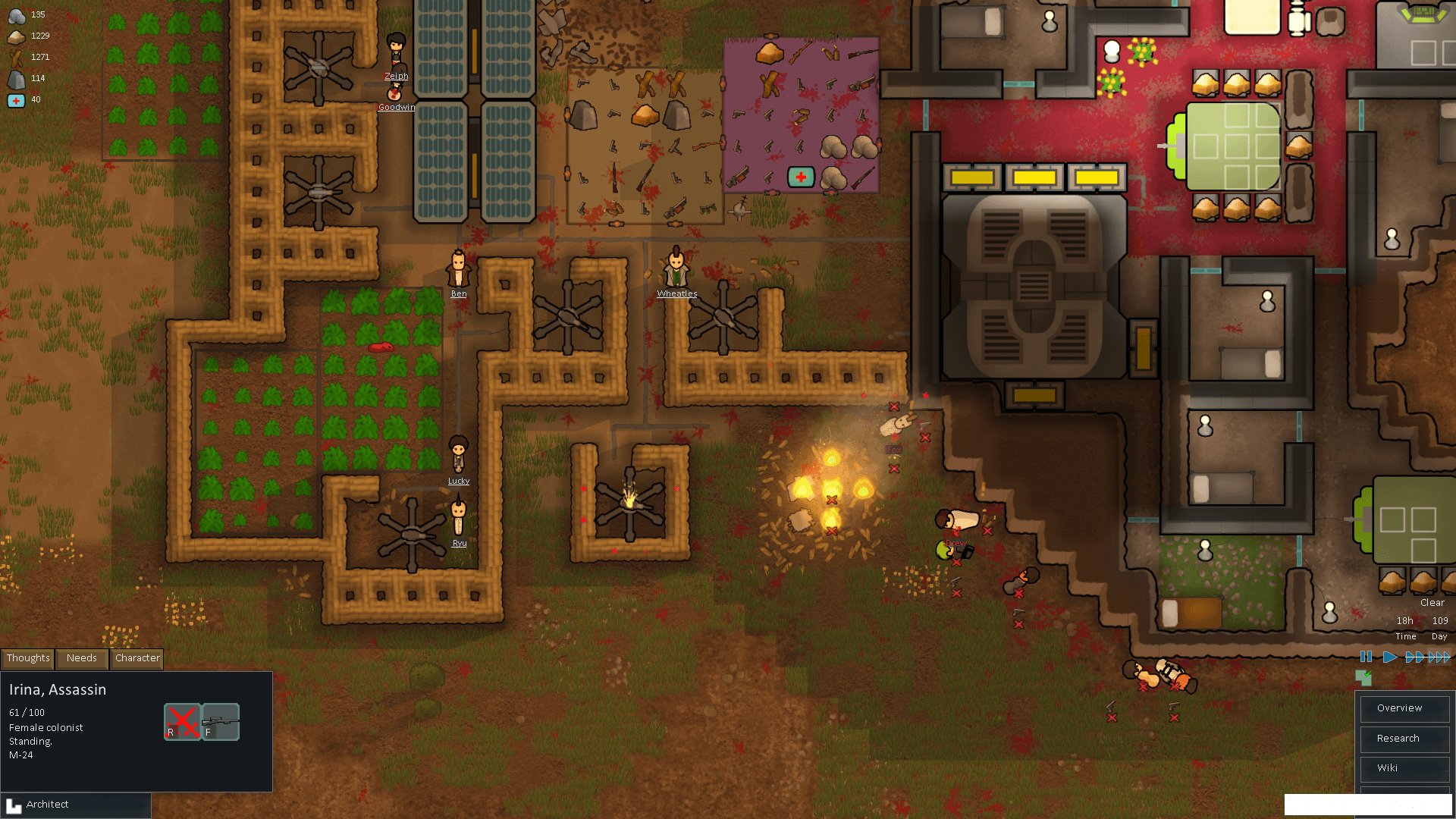 For those who are brand-new to the game, like myself, it can be a bit difficult to get started. There is a tutorial of sorts, but it covers the very basics like “people need food” and “don’t make everyone sleep on the ground.” Even after going through it, there were still tons of actions and scenarios I had no idea what to do with until I had been playing for a good couple of hours. My first base was a complete failure, and my second base was only marginally better.

It wasn’t until my third game that I felt I had a somewhat decent grasp on what the heck was going on. Even on my third go, I still had plenty of challenges, but these are all part of the game’s charm. Once you’ve gotten the basic commands and controls down, you can get into the “fun” of learning your colonists’ strengths, weaknesses, and preferences and begin building a base that will keep them safe and happy through the various seasons and threats you’ll encounter on the alien planet they’re on. 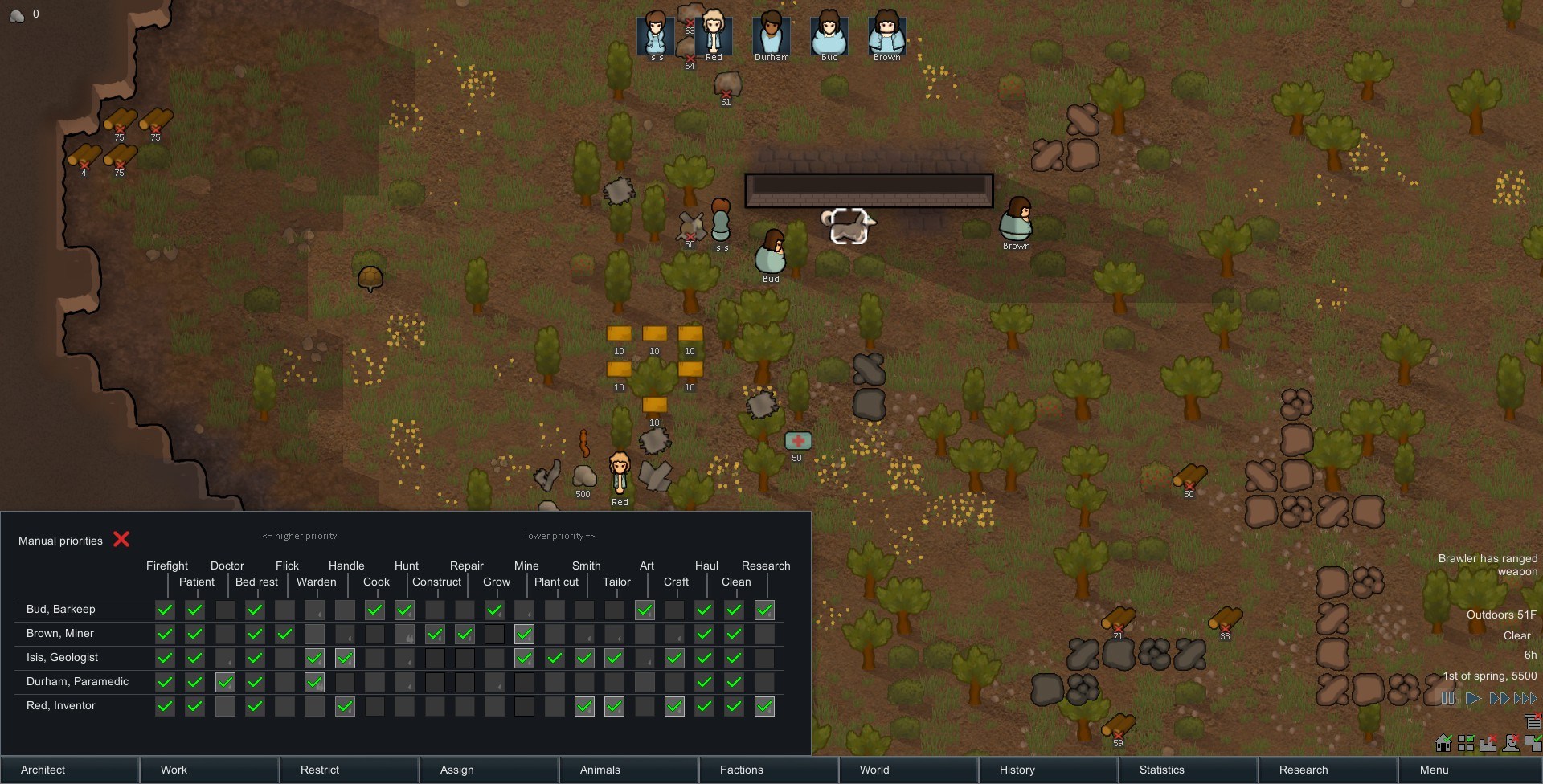 RimWorld allows you to set up the game style you’d like – from sandbox to extremely challenging – as well as what area your people will be landing in (note for beginners: temperate forest!). It even allows you to randomly generate the starting colonists until you are relatively happy with all of their stats. However, there’s still a large element of unpredictability, so you can never guarantee anyone’s survival or happiness.

As you build up and work with the various colonists, you may even begin to grow fond and not-so-fond of some of them. Somewhere in my game, I realized that I had delegated rows of shabby graves off in the middle of nowhere for raiders I had killed. For my first colonist, I began building the nicest sarcophagi I could near my base – because colonists are more important! 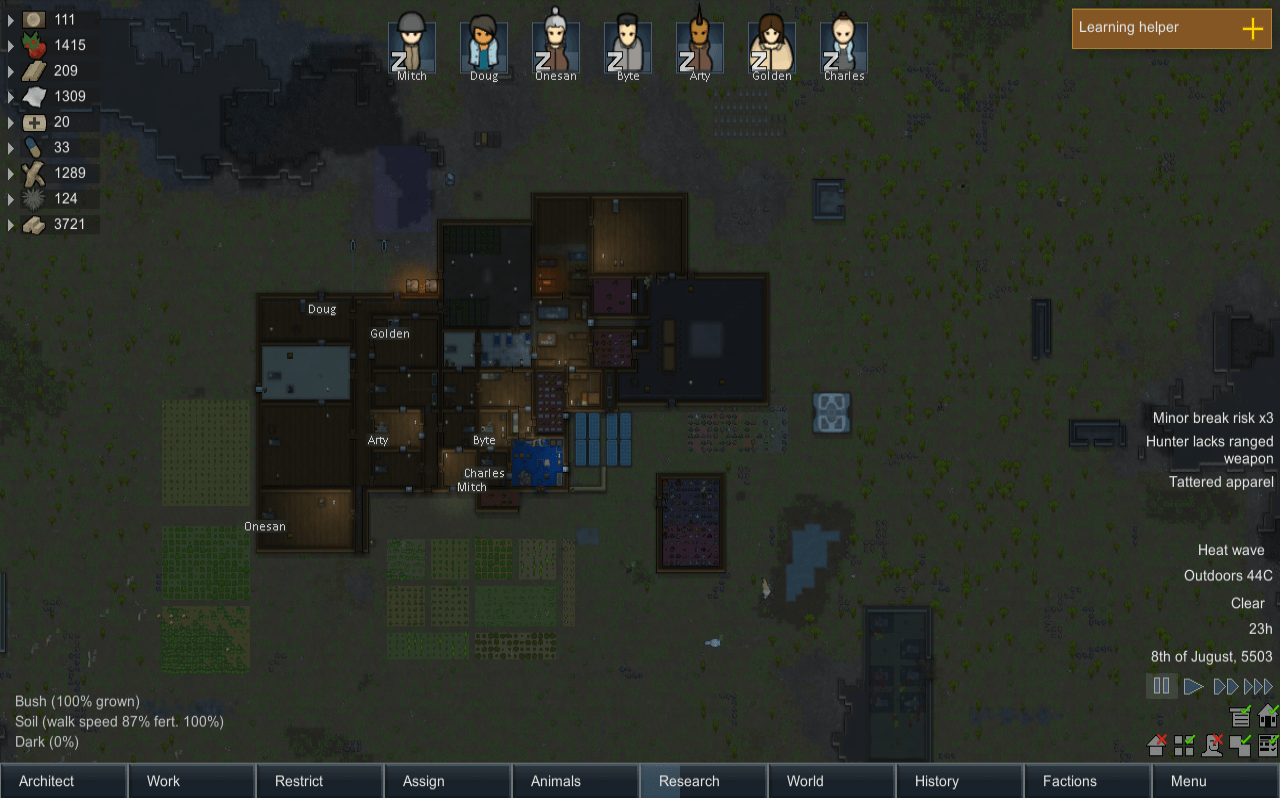 While I love the game for the most part, there were instances in which I wished there was more autonomy. I understand that colony simulators are always heavy on the micro-management, but having to turn on and off every light or heater/air conditioner is a little ridiculous once you’ve got a base of 10+ people. Seriously…they’ll just boil and complain about it because I forgot to turn off ONE heater in this freaking place?

As far as visuals go, I thought they’d be a problem. The initial welcome screen is a nice, but generic view of some planet from space, the graphics for the storytellers you get to choose from are very 90s, and the actual game graphics are barely above those from the original Oregon Trail. However, once I got into the actual story and caring every element from the amount of food to the color of the carpets in my base,  I completely forgot about the graphic quality and it eventually became another charming aspect of the game.

Overall, I really enjoy RimWorld. In fact, I’ve spent about three times as many hours playing in the last week than I ever thought I would, and I have no intention of stopping any time soon. It is well worth the $30 price point it currently sits at on Steam. Bonus: it works on PC and Mac!

RimWorld is a solid simulator game for anyone who wants full control over an entire colony.