Risen 3: Titan Lords is the latest installment into the Risen series, developed by Piranha Bytes and published by Deep Silver. You may recognize the Piranha Bytes name from their previous work on the Gothic series, which was a series that garnered a cult following when it first hit the PC. Risen 3 aims to return to its roots following the Risen feel, but there is still the mix of pirate themes that were very apparent in Risen 2: Dark Waters. 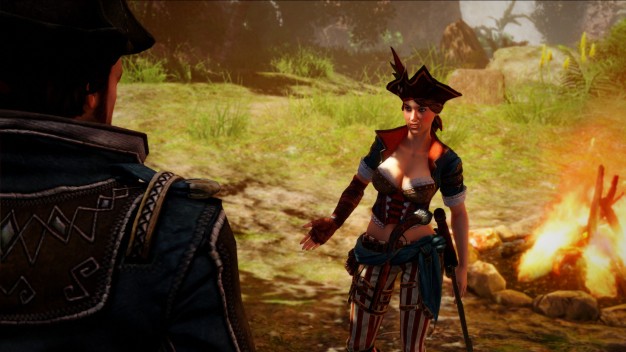 ***There was a delay in getting this review out due some technical bugs that had to be worked out. Sorry about that folks!***

I will admit that I personally have not played the previous installments of Risen, so I am looking at this with fresh eyes. Risen 3 immediately grabs your attention with the tutorial sequence, where you learn the basic controls and how to fight. After this brief sequence, we are taken to an island in search of some glorious treasure with the help of our sister, Patty. This first area continues to act as a tutorial as you and your sister traverse the lush tropical coves and ruins of the Crab Coast. When you think you are about to reach the treasure, hellhounds come busting out of a dark cave. Swiftly dealing with these baddies leads us down this cave til we reach a crystal portal, in which an underworldling pops out and takes your spirit. And you die. 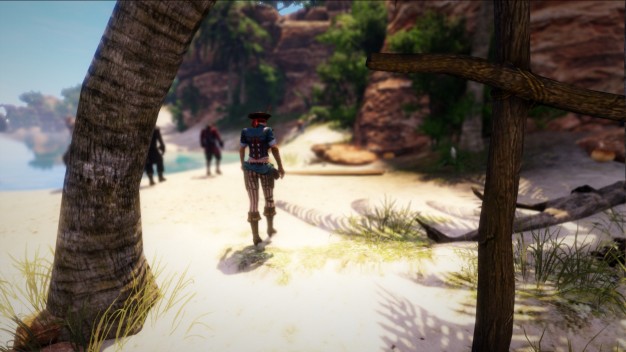 But alas, all is not lost. As your sister finishes burying you and leaves you at the Crab Coast, you are resurrected (risen!) weeks later by a strange witch doctor named Bones. He informs you of your predicament, in that you must recover your soul from the underworld, or you are doomed to become a minion of that world.

Just when I thought it was pirate time, doing some rummin’, scallywaggin’, and pillagin’, things go in a direction I personally was not expecting.

Your journey leads you to the pirate headquarters on the island of Antigua. It becomes apparent by the state of this island that things are going to hell all over the Southern Seas. You eventually quest out to other islands, where you will eventually join a faction to help you gather an alliance to stop the darkness once and for all. 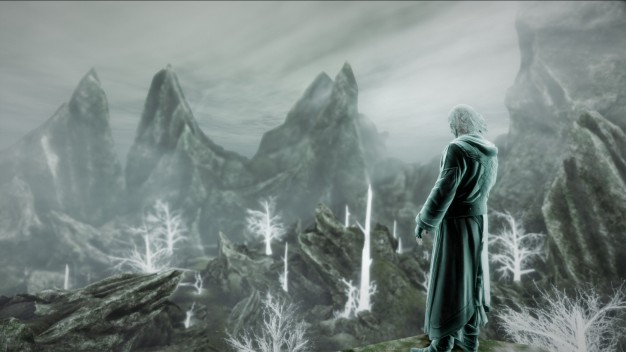 The story is good enough, and not at all what I was expecting. That’s a plus in the RPG realm, but with every step that Risen 3 takes forward, there are other aspects that take it a step back.

What the heck do I mean by this? You will easily discern this throughout the review.

Let’s get the aesthetics out of the way. The first thing that is apparent is the detail and excellent work on the environments in the game. This smacks you in the face when you are running around the Crab Coast in a lush jungle teeming with wildlife and atmospheric jungle sounds. When you venture out, each island has an identity, outside what has been taken by the darkness. Our protagonist and party members look great, although there are some questionable choices when it comes to their wardrobe. 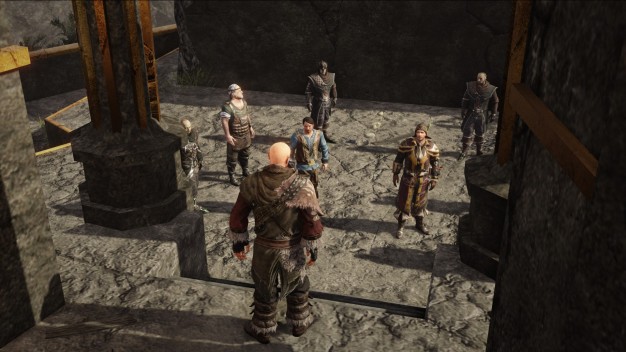 We took some steps forward here, but then there are the steps back. The character animations for dialogue aren’t that great, with some character models looking incredibly drab and almost lazily put together. The overweight guy model (believe me, he is everywhere), when he talks to you, his left hand always clips through and disappears into his own stomach. Necks tend to get strained, where some character look as though they have giraffe genetics. I have dealt with this before (looking at you original, not enhanced Witcher), but in this day and age, character animations should be pretty solid, especially when narration is such a huge part of the game. Maybe I am being a bit nit-picky, but when a guys hand goes through his stomach while he is telling you about local rumors… it just doesn’t sit well.

Voice acting is hit or miss. There are some real gems here in this department, but I had a hard time dealing with the protagonist. Can you imagine if Game of Thrones starred Stannis Baratheon the entire show? The protagonist’s voice is just as monotonous as Stannis’, but luckily there is a lot of dialogue in which you can tell someone to bugger off, which he nails. It was a love/hate relationship with this guy, but maybe that was what the devs were going for from the start. 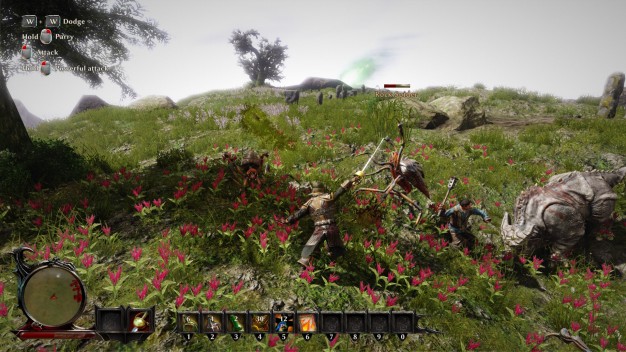 The combat is fun. It reminds me a lot of The Witcher and Fable. You can chain together combos, mixed with shots from your pistol or crossbow and magic spells. Dodge becomes your best friend, and exchanging blows on an enemy with your party member can become quite spectacular if you can execute swings in a synchronous manner. Some battles felt as though I was about to get wiped, when some well timed blows by myself and/or my party member swung the battle in our favor. Weapons are upgradeable, and there are a few different damage styles you can play around with. Something that was severely lacking was armor choices. You tend to keep the same wardrobe the most of the game. It kind of takes the fun out of loot when you know you aren’t going to get some sweet new hat or boots.

This lack of wardrobe may have something to do with the factions in the game. You have to join 1 of 3 factions, and once you choose, there is no going back. Like the game? More reason to go back and play it another 2 times! I went with the Demon Hunter class, which sounded like something I would have fun playing (thanks Diablo III). This is where the game really opens up, granting you access to all the special abilities that the faction has to offer. And spells! Glorious combat enhancing/ass kicking spells! From this point on, combat takes another step forward, just when you thought you would simply be swashbuckling the entire game. The spells (at least for Demon Hunter) are more like abilities, and when you use them, there is a recharge period. I might be inclined to go back and see what the other factions have to offer, but for simplicity sake (and that I don’t have that much time!) let’s just keep real with the one faction. 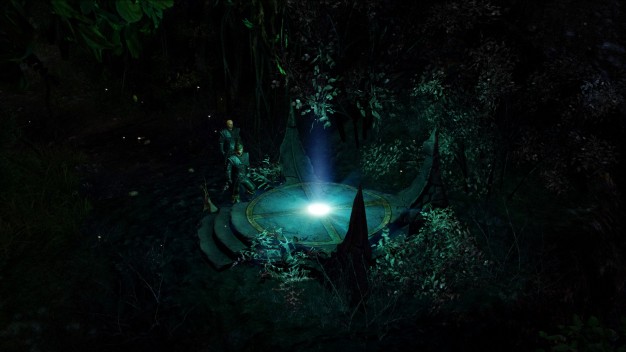 So what is the final verdict? If you are looking for an nice long RPG to sink your teeth into, Risen 3: Titan Lords may suit you just fine. I outlined a lot of pros and cons, but in the end, they even out. There is a solid storyline to base your adventure on, combat is fun, graphics look good (for the most part), and there is plenty to do as far as quests and exploration. But there is something missing that is keeping me from cashing in on Risen 3. Partially, there are other RPGs out there that do some things down right better. But Risen 3 does okay, and for some people, that is just fine.

A ho-hum placeholder between Risen 2 and Risen 4

Though the mechanics and graphics are improved from the last game, Risen 3: Titan Lords feels superficial and unfinished.