Samurai Jack is a cartoon unlike any other. With four seasons rated TV-Y7 from the early 2000s and a fifth rated TV-14 from 2017, the show takes a visually beautiful approach to telling the story of a samurai sent to the distant future when the known galaxy has been conquered by the god of evil Aku. Told through visually beautiful and creative episodes, subtle writing that explores themes of morality, justice, kinship, destiny, and many others while sprinkling in plenty of moments of levity, every episode of Samurai Jack is something special. So, how does the new game, awkwardly released three years after the show’s sudden resurrection, fare?

This is not Samurai Jack‘s first foray into the world of gaming. With the underwhelming The Amulet of Time for the Gameboy Advanced, the clumsy The Shadow of Aku on GameCube and Playstation 2, and the barebones Back to the Past board game, Samurai Jack‘s efforts have been unsuccessful to say the least. So, as an obvious fan of the show, I waited for the release of Battle Through Time with bated breath. And I am happy to say that it is, for the most part, a successful translation.

Developed by fledgling studio Soleil, developers of the Nintendo Switch Splatoon look-alike Ninjala and Naruto to Boruto: Shinobi Striker, Battle Through Time aims to deliver a canon story told in a Devil May Cry-esque action game. Unfortunately, the story is Battle Through Time‘s weakest component. Awkwardly sandwiched in the middle of the final episode of the series, players follow Jack as he is forced into a place between time by Aku where he must combat iconic adversaries across nine levels set in familiar locations.

For a show that explores as many concepts as it does, the game’s story is a terrible disappointment in how little of it there is. Each level has a small narrative within it that is comprised of Jack fighting through an area to find an amulet to break and move on to the next level, and that is really it. Most of the classic characters one would expect to come across are woefully absent, and the short interactions the player does have with familiar characters are short and unimpactful, seemingly only aiming to wink at players familiar with the show and say “Ah, remember this episode don’t you?”

This is worsened by the second worst aspect of the game: the cinematics. Battle Through Time‘s graphics are nothing revolutionary, but while in motion it serves its purpose well enough. The environments and many of the animations feel faithful to the source material and are visually interesting even on subsequent playthroughs. However, once the cinematics rear their heads, usually at the start of a level and before and after the obligatory boss fights at the end, the uglier aspects of the game’s composition become dogmatically apparent.

The facial animations are shoddy at best. Scenes are often awkward due to a lack of music or backing track. Animations seem stiff and dated. It is almost enough to send the player reeling from the whiplash of quality difference between the gameplay they were just engaged with and the cutscene they are tapping their foot to try and hurry it up.

This is very disappointing as a huge fan of the series, but the gameplay makes up for what the story and cinematics lack. Like the large majority of action games, a level in Battle Through Time is constructed by a series of delicately planned encounters of a steadily rotating ensemble of enemies. To combat them, Jack is equipped with his iconic magic sword as well as a handful of different spears, clubs, hammers, and his fists. Any weapons other than the magic sword and Jack’s fists have durability meters, which are important to deplete in order to get a small dropping of bushido spirit – one of three currencies used to progress through Jack’s three skill trees. 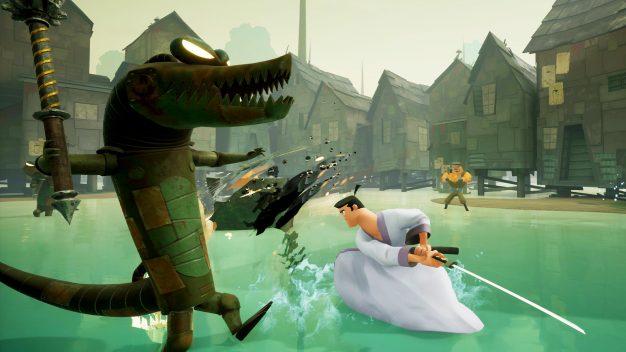 Each class of weapons have certain enemy types or situations that they flourish it, but any of them are more than capable in any situation. This arsenal is supported by a surprising addition, ranged weapons. Through a selection of throwing weapons such as shuriken and throwing knives, bows with different types of arrows, and, perhaps most surprisingly, guns. However, ranged weapons will not become a staple in your arsenal until playing on the higher two difficulty levels samurai master and master of masters.

The difficulty levels, of which there are four with the fourth being unlocked after being the game on its hard difficulty equivalent, can be punishing towards the end of the game but facilitate multiple playthroughs excellently. With each difficulty changing the encounters at a compositional level while also adding more advanced moves to each enemy’s move set, allowing players to cherry pick levels to replay and continually work on their builds and inventory, and the satisfying combat, playing through the healthy ten hour story multiple times is consistently engaging and invigorating.

As I mentioned earlier, Jack has three skill trees that players can progress through at their leisure. To do so players gather spirit, which is dropped by enemies, rewarded for completing challenges, and can be found by smashing everything in every room possible – a bona fide videogame staple. However, progress through the skill trees is hampered by most higher level skills requiring the previously reference bushido spirit and different gems as well as the base spirit to unlock them.

For the most part, the unlocks are meaningful with some being absolutely necessary, here’s looking at you ‘counter’ and ‘jump good’, while only a few are not very useful. The skill trees are very well designed. They steadily increase the player’s options when approaching combat scenarios while granting more than mere invisible stat upgrades that makes bigger numbers appear on the screen. 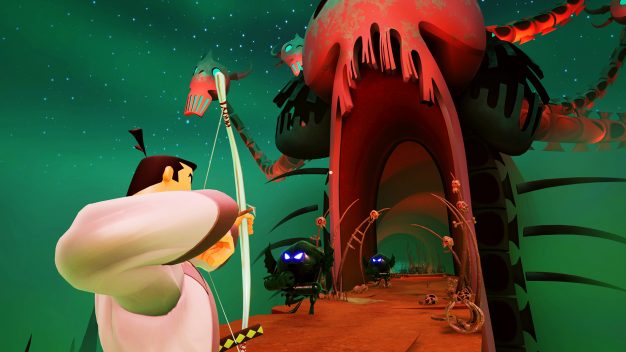 It is incredibly easy to recommend Samurai Jack: Battle Through Time. For both fans of the show and fans of action games, Battle Through Time offers a package that generously matches its $40 price point. The combat is satisfying, the experience is universally enjoyable, and the game offers a high skill ceiling that gives the player plenty of room for expression and offers a ton of game to experience. It may not be a perfect game, but it is more than a huge fan of the show like me could hope for.

+ Style to match the beautiful show

– Story is disappointing and pointless despite being canonical

About the author: Arron Kluz

Arron Kluz has a bachelor’s degree in Media Arts and Game Design that has proven completely useless in his home in the Midwest. His love for video games started at a young age as an escape from the...  Read more...