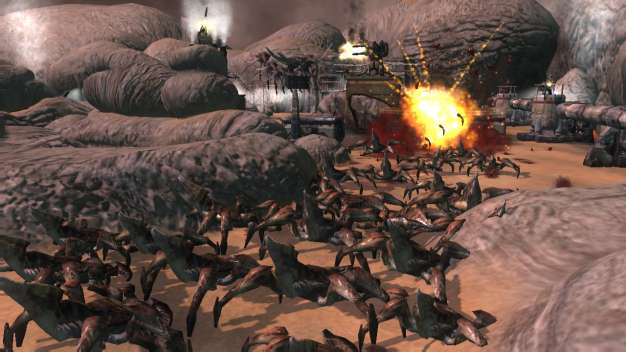 The PlayStation Network is not known for having a huge catalog of games like XBLA has, but what it lacks in numbers it more than makes up for in quality. Case in point is the FluffyLogic developed tower defense game Savage Moon which is now available on PSN for $9.99. Savage Moon has been compared to Starship Troopers because of the hordes of Insectocytes that relentlessly try to destroy our base. That’s a very accurate comparison because the game does take place on many moons in different nebulas and every bug like creature on these moons wants us dead. What we’re left with is a standard tower defense game that won’t win any awards but is still enjoyable to play.

There isn’t a story in Savage Moon to speak of. All that’s known is that there is something on the moons that we need to mine for and for some reason the insects don’t want us to have it. Of course we don’t bow down to these oversized critters, so we’re tasked with erecting numerous towers to fight them off. This is how just about every tower defense game ever created is played. Savage Moon uses credits that can be obtained from killing insects to either create more towers, upgrade existing ones or research more technology that will aid in missions. Starting off with mostly machine guns and anti air towers. The tutorial levels are pretty forgiving and tell us all that is needed to know about the games controls and mechanics. Once that’s over the difficulty ramps up very quickly. The only way to win is by trial and error because failure will come quick and often.

Besides building defense towers, Savage Moon has other options that can turn the tide of battle. For example, if the player is sure that their towers could take out one wave of insects without any problems, they can choose to advance the next wave before the timer runs out. Doing so earns extra credits that are very useful in the long run. Research can also conducted into blocks that can dictate which path the insects will take. A clever placement of these blocks will ensure the insects take the longest route possible, thus making the towers far more efficient in massacring the insectoid invaders. The player can choose to have certain abilities such as extra damage, more tower armor or extra credits between each wave. Choosing one ability will make another less effective so it’s best to choose wisely. Unlike some other tower defense games the towers in Savage Moon are not invulnerable to attack. Insects will run right into them until they blow up. We can solve this problem by placing repair towers next to them. This adds a further layer of strategy into the game which incidentally ramps up the difficulty as well. 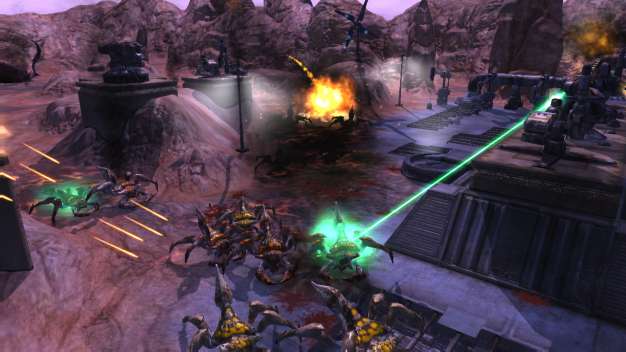 The graphics in Savage Moon aren’t that impressive. All the landscapes on the different moons look the same with the exception of color. The towers do change appearance once they are upgraded and provide satisfying effects when shooting. The quality of the insects was passable when zoomed in all the way, but were hardly mind blowing. One neat feature is the ability to look through a camera placed inside each tower. The result is a gritty picture that adds some drama to the battle. The sound quality is also lacking. Besides the thundering of explosions and shrieking of dieing insects, nothing is too special.

If you like tower defense games then Savage Moon is the game for you. It’s one of two tower defense games on PSN and is definitely welcome. Casual players be warned that it’s very difficult after the tutorial levels. However if earning a Trophy through hard work is right up your ally, you won’t be disappointed with Savage Moon.