I love a bit of cloak and dagger. There’s something really satisfying about not having to do any fighting because you’ve manipulated another sap into getting stabbed a lot for you. Anything that makes me want to rub my hands together and cackle with glee is bound to be bags of fun. I fully realize that none of what I’ve just said says anything for my personality or mental stability but it does lead us nicely into today’s game. I’ve been playing Secret Government on Steam and I decided it would be mightily remiss of me not to share.

So, Secret Government basically sees us taking the role of a secret society in a game rooted very loosely in history. We’re going to be taken back to a time when ruling a country from the shadows was a very real possibility, a time when if a country went to war it may well have been more the case of a well-whispered comment in the right ear than any tangible political or societal reason. I think you should have a pretty fair idea of the setting now so we’ll move on. This is all you’re getting, by the way, you can enjoy the story when you play the game.

In Secret Government, the focus is obviously very much on remaining secret. This isn’t just down to your own agents keeping their mouths shut and not getting caught doing anything nefarious. You will need to recruit new brothers into your fold and to do this you will need to be fairly good at reading people. So as an example. You may have a general who’s a bit of a brawler. You want control of the military so your building your strength in this area. So you have someone that won’t be easily intimidated, and this is a good thing. The flip side of this is he’s also greedy and easy to bribe. This leaves you with a quandary. You want your muscle but you don’t want someone opening their mouth because they’ve been paid off. These are the choices that lie at the center of this game and all the plotting and scheming is really rather fun. 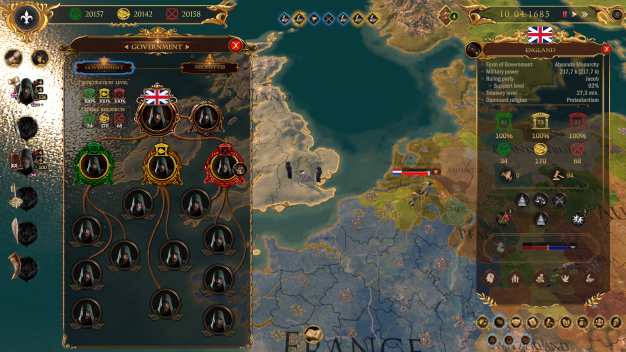 Every country has its own government structure. You need to turn that to your own purposes.

The first thing to note about Secret Government is that this isn’t a game for players that don’t have a lot of patience. This title falls into the overly complicated end of the strategy spectrum. I’m not saying this as a bad thing but it’s more about careful planning than it is fast action. There’s a lot to learn, and the tutorial while good isn’t as easy to understand as it might be. This is the sort of game that needs a hand-holding tutorial. You can see your objectives but actually completing them is sometimes another matter. Basically being told what to do and doing it aren’t necessarily the same thing.

Being dim, I jumped straight into the game on my first play and quickly realized that I wasn’t getting anywhere. It’s only when you start playing through the tutorials, which are helpfully broken into parts, that you realize just how much of a balancing act Secret Government is asking you to perform. You need to be thinking on two levels at least at all times if you’re going to succeed. You have your main goal which you’re working toward. One of these is to turn England into a truly Catholic nation and garnering favor with the Papal States. To do this you’ll want to set up peace talks. If they go well your standing will improve thus helping you complete your mission, but before  this you need the right minister for the task in the brotherhood and wealth to fund the endeavor. To gain wealth you’ll need agents in the treasury. While you’re doing all of this you’ll want other agents covering up your actions.  This just covers the local wheeling and dealing! 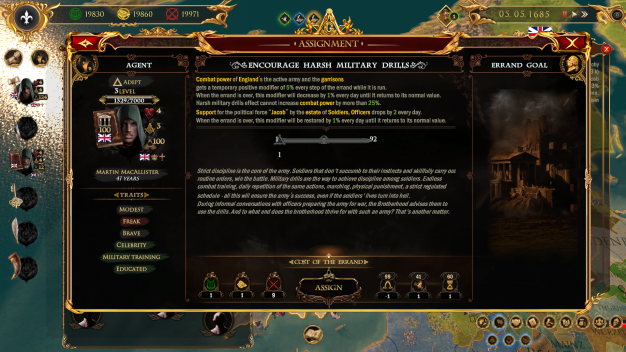 You need to be able to manage every aspect of governance. Your own goals are the conclusion, not the journey.

On a global scale, you want brothers in other countries helping your cause. This could be establishing lodges, starting wars, or befriending other countries through diplomacy. If you run out of cash at home and don’t have enough global funds your efforts could grind to a halt rather quickly. This scenario is based on the assumption that all is going well and you’ve been able to put the right pieces on the chessboard at the right time. So what if the said minister is too honest to be bought and can’t be intimidated or be persuaded to join your society? That’s any hope of your peace talks down the toilet. So you’ll need someone more willing to do as they’re told. This means removing your problem by assassination and hoping the next person to get the job is a bit more cooperative.

The above rather, complex, badly described series of events is just you working toward your main goal. This is forgetting the fact you’re running a country. You might have riots to contend with meaning you’ll need control of the police. Certain elements of society may be paid too much or too little and you’ll need to watch taxation and so on. All this for just one country and you have the world at your fingertips. 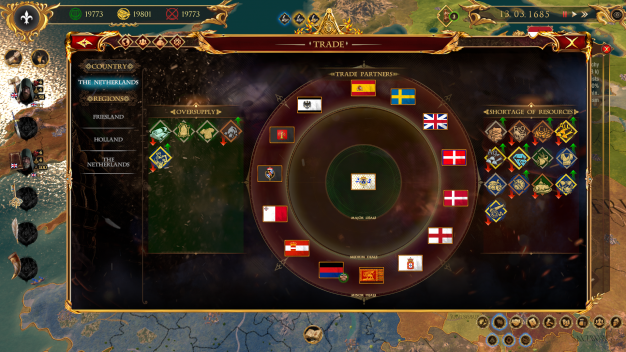 On top of everything, you have other secret societies to worry about. They may have different goals but essentially they’re all after the same thing and you’re an obstacle. You won’t initially know who is working for someone else so there’s information gathering to be done too. All that clear as mud? Good!

So … pros and cons then. Well to be honest the biggest pro is actually also Secret Government‘s biggest downfall. The complexity of this game makes it fun and really engaging. This is the sort of game that you don’t get hooked on if you like your life and want to spend time in the outside world. The problem though is for it to be as engrossing as it is it also needs to be really complicated. The controls and actual basic UI aren’t overly complex but there are so many screens to remember to look at and so much that you need to keep an eye on that it’s very easy to forget something crucial and land yourself and your society in a pickle. This being said, this is the sort of game that will appeal to gamers that like their strategy on a grand level and have a lot of time on their hands. I think that players that like the easy to learn, hard to master approach will struggle with Secret Government. 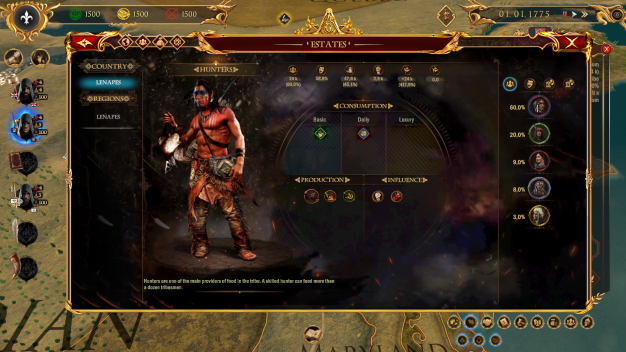 Every country has its own class system. From the aristocrats and clergy right down to the workers and you have to manage all of it.

Like I mentioned earlier, the tutorial needs to be a bit more hand-holding than it currently is. Something that I have to say though is that just in the time I’ve spent with it the format of the tutorial has changed completely from one mission to something more palatable because it’s in separate scenarios. I get the impression it’s probably still being worked on so no real problems here.

This brings me back to a really big “pro.” The devs have not put their game out into the wild and just let it do its own thing. You can very much tell that this is a labor of love and improvements are constantly being made. I saw notable differences from my first playthrough to my current one and I think this will be an ongoing thing. This has to be applauded. 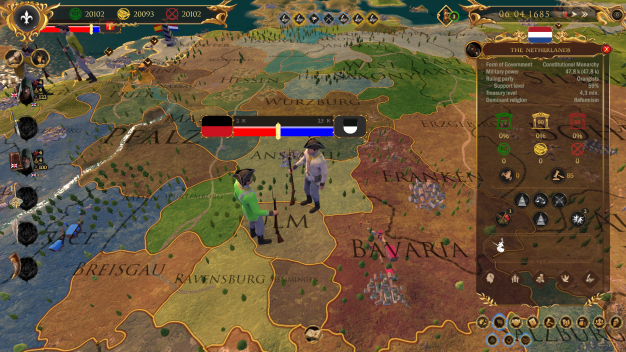 Thinking locally and globally is critical.

Gamers absolutely need to remember that this is a title that’s using historic events as a plot device, but by no means is Secret Government rooted in history. Having read a few reviews I saw the odd complaint that because Secret Government isn’t completely true to historic events it loses some of its realism. My take on this is that if it were closer to history the devs would have each needed a university degree before they could get anything done and you’d be playing a thesis not a videogame. I note this because if you happen to be one of that few looking for exact events you might be disappointed.

Nuts and bolts wise the graphics are gorgeous. Secret Government really makes you feel like you’re at the head of a giant conspiracy. Everything is well painted out and the aesthetic is completely on point. The sound isn’t anything to particularly write home about but the audio does what it’s designed for and isn’t annoying so definitely a few points earned there. After that, the interface is relatively simple. It’s more about remembering what all of the screens you’ll need to watch are for than actually accessing them so no problems there. All in all, this is a tight, well-written game that definitely does what it’s supposed to do. 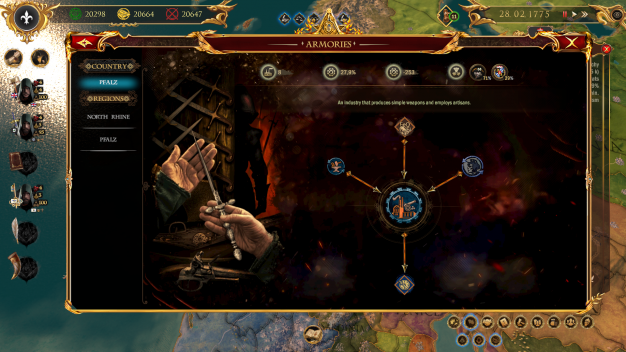 I’m having a lot of fun with Secret Government. I’m a pretty patient gamer and can comfortably play in short bursts until I completely understand what I’m doing. Those of you that like mammoth gaming binges might want to start slow. If you dedicate hours to this game from the off you’ll more likely end up with a headache and that’s never fun. Take it slow and easy and learn in bite-sized chunks. Once you’ve done this you can play till the cows come home and you should really enjoy yourself.

Secret Government is absolutely not a game for everyone. If you’re patient and like your strategy multi-layered you should definitely give this title a whirl. If you want something you can play on the go or can’t be bothered with lots of learning and just want to get on with it you should probably steer clear.

Secret Government might be a bit polarizing. This will all be dependent on the individual experiencing the game and how complex they like their strategy to be. If like me you like a bit of deep thinking and lots of plate-spinning you need to get your hands on this game. If you like your game simple so the strategy shines through in a different way, though, I’m not sure you’ll have a lot of fun here. I’m obviously painting people with very broad strokes but I genuinely don’t think this will be a game for everyone.