When Shadow Warrior 2 was released for PC last October, I couldn’t wait to play the over-the-top action-brawler on my PS4; my wait is finally over. Developer Flying Wild Hog and publisher Devolver Digital have teamed up once again to grace the consoles of Wang fans everywhere.  If you played the first game, then you know what to expect with this follow-up. The action is turned up to 1000 with a robust online cooperative campaign mode, scores of unique weapon combinations, and a stunning mix of hand-designed and procedurally generated worlds.  As you can probably guess, you take on the role of everyone’s favorite, smart mouthed corporate shogun, Lo Wang, in his quest to smite the demonic legions trying to take over the world and make right what has gone so terribly wrong. 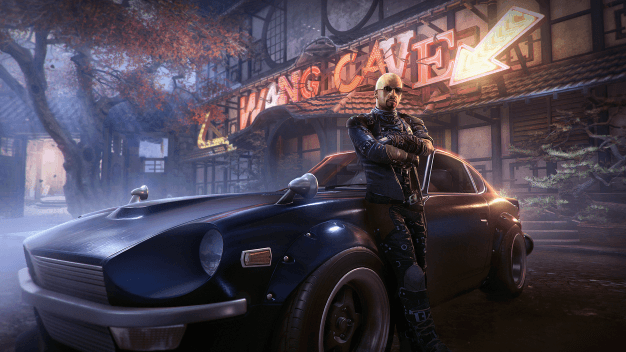 As anyone who has played the original Shadow Warrior can attest, this game is all about the weapons.  Take your pick from pistols, shotguns, and machine guns to katanas, scythes and even a chainsaw to blast, slice and dice your way through the hordes of demons threatening the world.  While you can make your way through the game just using your sword, this is a First Person Shooter through and through.  With that in mind, finding which weapon combination suits your play-style is only a matter of trying out every weapon that you stumble across.  You can go in silent like a ninja, or blasting your way through demon rib cages like Arnold Schwarzenegger on steroids. 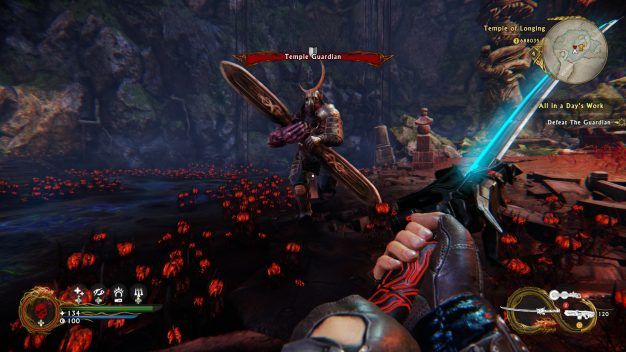 With so many weapons to choose from, you need a weapons system that makes it easy to not only chose which weapon combination you like to play with, but to be able to swap from one to the other on-the-fly.  Shadow Warrior 2 has provided a weapon wheel selection system that showcases all available weapons that you can snap to the triangle button for firearms and the L1 button for swords and blades.  You can only have two of each type of weapon selected at a time, but it’s quick and easy to bring up the weapon wheel, make new selections and then get back to the action.  It’s an intuitive system that works well and makes wading through the enormous amount of weapons that you find manageable. 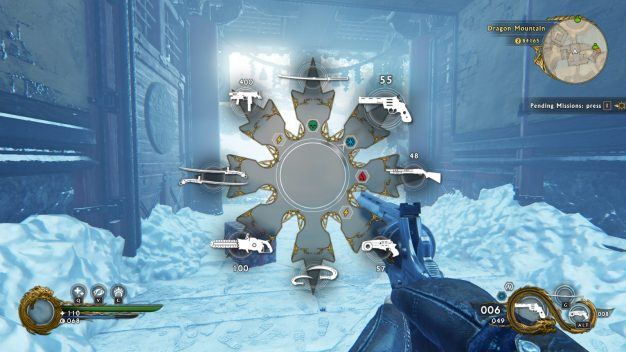 There is also a very robust custom upgrade system that allows you to upgrade the weapons in your arsenal with up to three stones at once to improve performance or augment them with devastating elemental effects.  You usually get these animal shaped stones from defeating enemies, but you can also find them in chests and other places around the levels.  In addition, you can also collect karma, amulets and armor to enhance Lo Wang’s power and turn him into a demon killing dynamo.  Every weapon in the game can be upgrades with these stones. The stones can also be removed from one weapon and placed in another, so if you find one with particular attributes that you like to play with, you can just swap it out.  These upgrades are game-changers and there are so many different ones to choose from that you can have a different combination for every weapon for any situation. 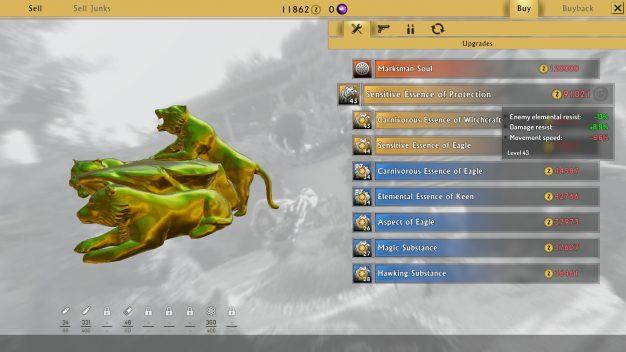 While the visuals admittedly aren’t the prettiest, they don’t look bad and the art-style fits well with the theme of the game.  The environments are actually fairly well crafted, but it’s the character models for the human characters that could have used a bit more polish.  The demon designs, on the other hand, are very well done and are really kind of freakish and scary.  The voice acting is where this game really shines and is possibly the best dialogue in a game of this type that I have ever heard.  Pulling off comedy in video games is sometimes hard, but it works awesome here and kept me holding my stomach. 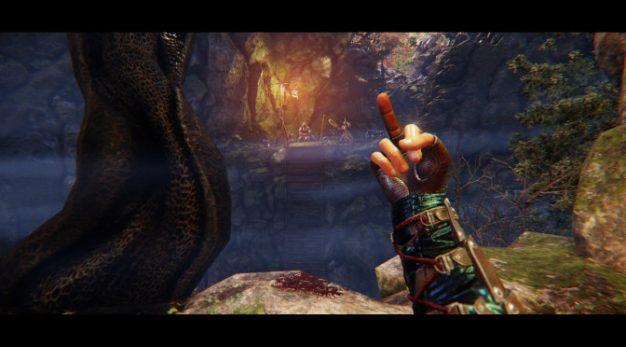 Now you can choose to go it alone if you want but why would you when you can play with up to three of your closest friends (or at least three willing strangers online) in campaign co-op mode.  Many FPSs of this nature released today choose to forgo the co-op portion of the game in order to just concentrate on the single-player campaign mode.  However, Shadow Warrior 2 didn’t shy away from this feature and I think that it is a better game because of it.  Add to that the campy story line and you have the makings for some really great gameplay with friends old and new to spend a weekend with. 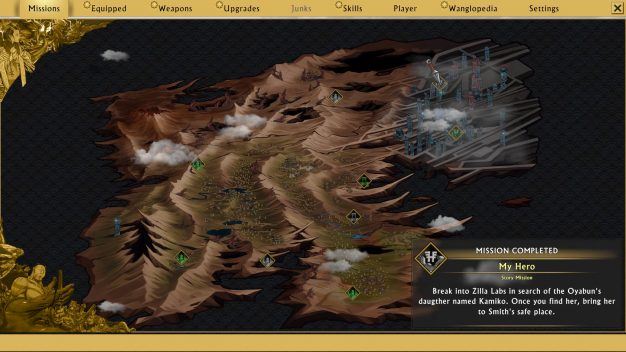 The only gripe I have with this game, other than the ugly human character models, is the fact that it takes about two hours before the game opens up.  Shadow Warriors 2 is enormous and once you get to a certain point, it opens wide and provides a gameplay experience that is definitely worth the wait.  After playing for about eight hours, I was only about 20% through the game just to give you an example of what to expect time-wise.  There is so much to do here for $39.99 that I felt like I was taking advantage of the developers.  This game is ridiculous and at the same time Fun with a capital F.  This is the game that Duke Nukem should have been, so I’m suspecting that Lo Wang probably has him gagged and stuffed in his trunk.

Who Wants Some Wang?