There used to be a time when shooter games were all the rage and putting up a high score in a game like Defender, Gradius or R-Type was proof of your gaming greatness.  Well, that’s not the case these days, as good things aren’t meant to last, but it is nevertheless good to see development studios still working at keeping the shmup genre alive. 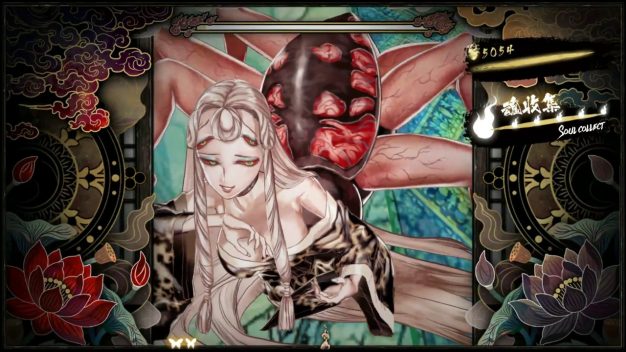 While they don’t get the recognition anymore that they truly deserve, bullet-hell shooters are still being made and offer some of the best gaming bang for the buck.  Recent offering from developer Deer Farm and publisher Digerati called Shikhondo: Soul Eater melds Korean mythology with fast-paced shoot ’em up action against the backdrop of beautiful Oriental artwork.

Shikhondo: Soul Eater is described as a Korean bullet-hell shoot ’em up set within a beautiful and bizarre world of Asian mythology.   You will face off against armies of demons known as yokai that have escaped from Limbo and are spreading like a plague across the land, sowing fear and stealing souls.   You take on the role of one of two female protagonists known only as “Grim Reaper” or “The Girl” and will need to use their magic abilities to destroy the pestilent invaders and free the captured souls from their eternal torment.  The game features an Arcade mode, a Hardcore mode for genre purists and Local Co-op so you can invite your friends to come over and play. 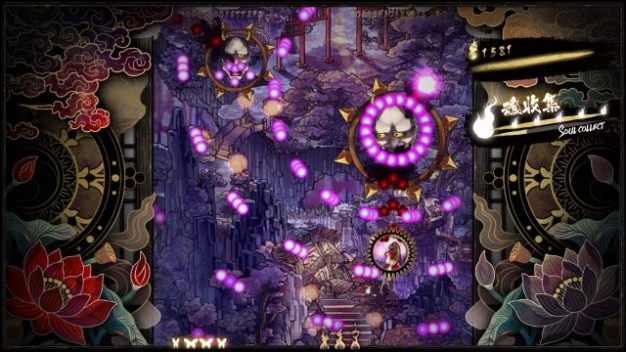 Levels are set in a vertical orientation with action happening in a bottom to top setup.  Your character can move anywhere on the screen however, enemies usually make an appearance directly from the top of the screen or from the sides along the the top two-thirds of the screen.  There is gorgeous artwork that covers the left and right sides of the screen as that area isn’t really used by the game.

The actual play area is a pretty narrow area of screen real estate, but is typical of modern shmups as this keeps the gameplay intense and at times feeling claustrophobic.  Enemies will invariably fill that real estate with pulsing bullets in various colors and amazingly intricate designs. Working your way to the level boss while navigating that type of environment will be challenging. 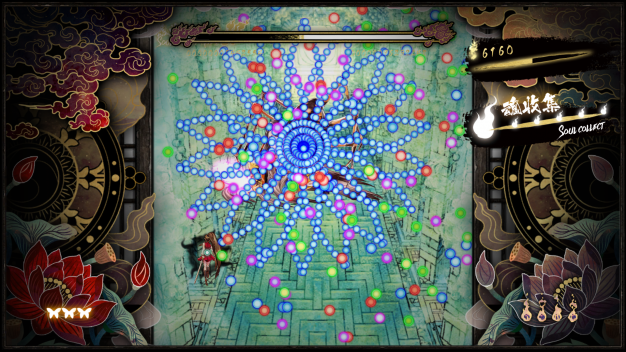 I realize that my next statement really doesn’t need to be said, however I will state it anyway; you will die a lot.  Mythological beasties of all shapes and sizes will try to thwart your attempt to curtail their soul stealing activities. They will launch a seemingly unlimited amount of firepower at you, so not getting hit sometimes will be impossible.

Fortunately, the game is built with unlimited continues so you can just hit Start and pick up right where you left off.  Back in the day, if you were killed you would have to start back at the beginning of the game after you had depleted your original allotment of three lives as well as any extra lives if that was offered in the shmup you were playing.  While this gets rid of the frustration of getting far in the game only to lose your last life and have to start all over, it makes for a quick play-through of the games middling five levels. 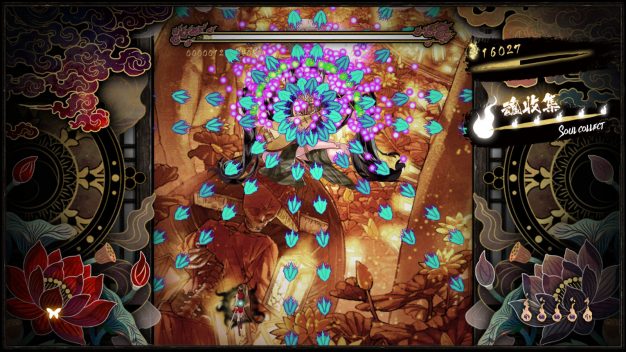 Each of the two characters has just one main attack and a powered up version that can additionally be powered up depending on how many Soul Attacks you have available.  You can fill your Soul Collect gauge by getting as close to the enemies projectiles as possible without coming into contact with them.  Once your Soul Collect gauge is full, you can unleash a devastating attack on the enemies that you can use if you have gotten overwhelmed by the lesser demons.

However, it may be a good idea to save it for when you get to the level boss and need to do massive damage.  One thing that I felt was missing from the game is a system of floating, collectible power-ups so that you can boost your regular weapon beyond its normal operation without having to manage a gauge. It would have also been nice to perhaps have even some different weapon types like a laser attack or pulse attack to complement the machine gun type attack that is standard. 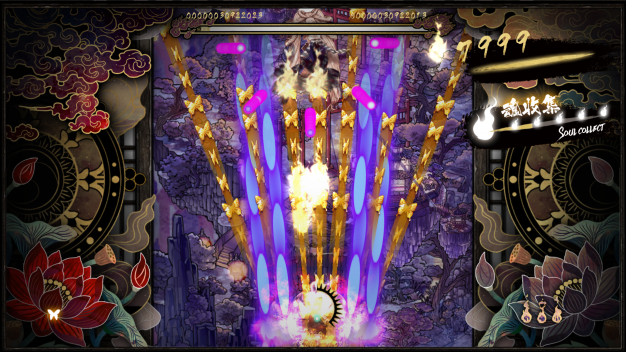 One aspect of this game that really grabbed me is the amazing artwork that is the foundation that this game is built upon.  Normally, the shmups that I play have some sort of tech or sci-fi aesthetic to them so the player is usually piloting some type of spaceship or aerial vehicle of some sort.  I have even played a fair amount of shmups where the player is in a mech suit with various weapon upgrades to make things more interesting.  Having the player take on the role of a couple female baddasses is cool and was the perfect design choice for the game having them opposite the evil demons.  I recommend giving this one a spin and checking out some of the other features besides just the Arcade mode.  This one has a lot to offer in a small package if you give it a reasonable chance.

Bullet-hell shoot ‘em up set within a beautiful and bizarre world of Asian mythology.