Shovel Knight from Yacht Club Games is an action/adventure game that stylizes itself after the old-school 8-bit games of our youth.  Taking inspiration from classics such as Super Mario Bros., Mega Man, and Castlevania as well as modern games like Dark Souls, Shovel Knight is an incredibly fun side-scroller with plenty to offer as you travel across its large map.  The game was financed by crowdfunding through Kickstarter, and was funded in April of last year reaching more than four times its goal of $75,000.  The extra cash has gone to multiple stretch goals, including achievements, challenge modes, and multiple playable characters.  It even has two songs scored by the original Mega Man’s composer Manami Matsume.

In the game you play as the titular Shovel Knight, wielding his mighty ShovelBlade to vanquish his foes.  As our story begins, we find a terrible fate has befallen the land: an evil Enchantress has swept over the valley, taking control of many areas.  The Shovel Knight has set out to find the Enchantress to not only rid the valley of her ilk, but to save his lost beloved Shield Knight as well.  Between him and the Enchantress are a group of knights known as The Order of No Quarter – strategically placed at many conveniently dangerous areas throughout the world – who will stop at nothing to keep Shovel Knight from achieving his goal. 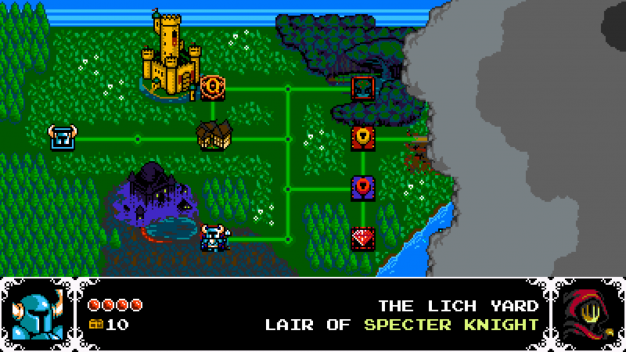 Shovel Knight has an overworld map styled very similar to the one used in Super Mario Bros. 3, where you move from location to location in a grid-like manner, with different points corresponding to individual areas to visit.  After the introduction to the story, we are brought to a city unsullied by the evils of the land.  This town becomes very important as the game progresses, as it is where you will upgrade both your health and magic as the game progresses.  Neighboring this safe haven are castles guarded by knights from The Order of No Quarter, whom you must defeat before moving on to the next part of the map.

The map is separated into three main areas, with a fourth area housing the Tower of Fate, the Enchantress’ keep.  There are a total of eight knights to defeat, along with multiple encounters on the overworld map that randomly move a la the Hammer Bros. from SMB3.  Each knight has a different style of fighting, very similar to the bosses of the Mega Man series.  Unfortunately, you don’t get to use a knight’s special ability once you’ve beaten them.  Other than the various levels you have to beat in order to advance, additional towns and special areas await as well, holding various treasures and items for you to claim. 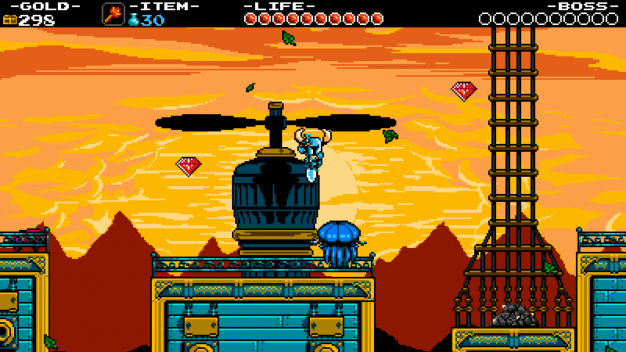 One of the more unique aspects of the game compared to others like it is its deviation from the 1Up system mechanics.  Unlike many games that Shovel Knight pays homage to, you are not limited by a finite amount of lives.  Rather, a number of checkpoints are scattered throughout each area so that whenever you fall to superior forces or sheer dumb luck, you don’t have to start all the way over, or do you have to start completely at the beginning of the game should you lose your last life.  This mechanism is more beneficial for gamers who don’t have the time to spend memorizing the layout of each level so you can get through safely and more quickly each time you play through it.  Others may think that that mentality defeats the purpose of a game like this, and the unlimited tries method makes a game too easy.  However, Shovel Knight attempts to appease bother parties by utilizing a high risk/high reward style of gameplay.

As you make your run through a level, you collect treasure from enemies, chests, and random piles of dirt (you have to use that shovel somehow).  Treasure allows you to buy armor and ShovelBlade upgrades in addition to health and magic upgrades as well.  However, the more treasure you have on you, the more you risk losing if you fall in battle.  If you die, you lose a decent percentage of the valuables you had accumulated thus far.  The game does give you one chance for redemption from your errors: if you can make it back to the spot where you perished you will have the opportunity to reclaim your lost gold in the form of flying bags, but bite the dust before that and you can kiss your precious money goodbye (and have a whole new set of money bags to reclaim!).  Once you’ve beaten a level, you can keep going back to get more dough,  but beware: if you return to the overworld before defeating the boss again you lose everything you’ve accrued in that level.  In addition to using your funds in cities for upgrades, each level also offers a (usually) hidden treasure chest containing a strange man willing to sell you a magical relic.  If you don’t have the cheddar, you have to play all the way through again to find him (and once again beat the boss). 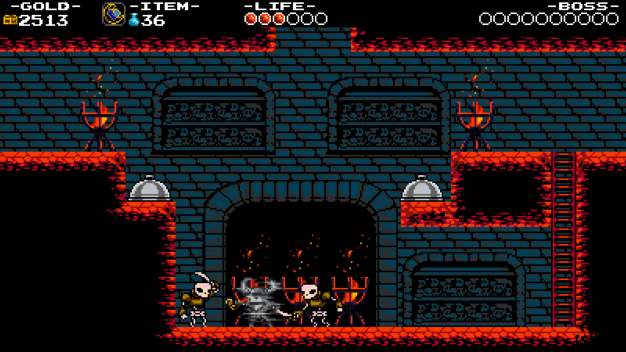 Throughout the game you will come across a number of relics that add to your repertoire of abilities.  Some of these relics are very useful in battle or throughout a level (casting firebolts or temporarily becoming invincible, for example), and others are more useful in certain treasure hunting areas, such as short-term flying.  These relics rely on your magic to use, which you can upgrade over time so that you can cast spells more often without having to worry about replenishing it by finding potions.  A couple of relics don’t require magic, but are chalices that can be filled with tonics that will aid you in battle.  These tonics can either refill your health and magic meters, make you a treasure magnet, or cause you to become invincible for a brief period of time.  These chalices can be refilled by a strange dancing whale in a pond you find early in the game, and are a one-time use item once you’ve entered an area.  While these are certainly nice and obviously beneficial, the chalices could be purchased for relatively cheap, and tonics are free, making bosses much more easy to defeat especially early on.

Another note on the bosses is that they almost seem out of order.  The first boss is pretty much a pushover, but then come a few very difficult big bads, followed by some more easy ones.  It almost seemed that the knights were designed to have increasing difficulty, but then were shuffled and put in randomly.  While you do have the option to choose which order you complete the levels within each of the three areas, the second area’s bosses proved more difficult to take down than the third area’s.  It may have been that you have more abilities at your disposal by the time you reach the third area, but the patterns and moves seemed much easier to predict or avoid in that third area than with some of the guys in the previous areas. 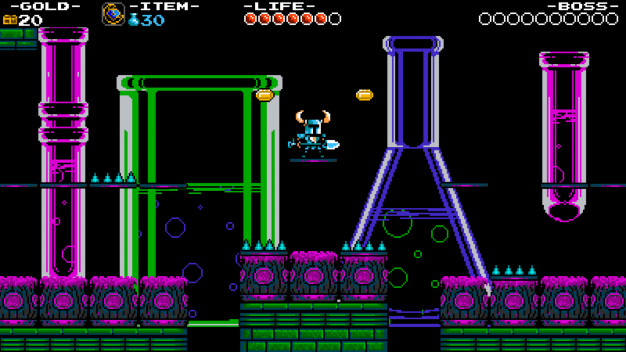 Overall, Shovel Knight is a challenging but ridiculously fun side-scroller, with lots of references to the games that influenced its development.  One of my favorite aspects of the game is that you can almost make it as challenging as you want.  For example, while there are multiple checkpoints present in each area, you can decide to completely forgo them, and instead destroy them for lots of treasure bits.  You can also choose not to purchase or utilize any of the relics, instead smashing every single adversary with only your trusty ShovelBlade.  And while that may be a lot harder to do than fireball to the face, the onus is on you to make it as easy or as hard as you want.  It all goes back to the high risk/high reward mechanism of gameplay which is utilized very well throughout the game.  I also enjoyed that each level has a very different structure from all the other levels, and while there are some common elements throughout, each area had its own special something that you had to figure out and overcome.

If there is one criticism I would make, it’s that the character moves a little sluggishly compared to other side-scrolling characters.  Perhaps it was due to my using a controller rather than a keyboard, or maybe it’s because the protagonist is a knight wearing friggin’ heavy plate armor, but it was a little difficult to get used to when most other games in the genre usually have a quicker-moving control scheme.  Beyond my misgivings of sluggish movement and the ability to make the game almost too easy, Shovel Knight is very well polished, and is definitely worth the time if you are itching to play those classic 8-bit platforming games again.

Shovel Knight is available for PC either directly through the developer’s site (DRM-free) or through Steam for $15, and is available for preorder for Mac and Linux users as well.  You can also find the game on the Wii U and Nintendo 3DS through the eShop for the same price. 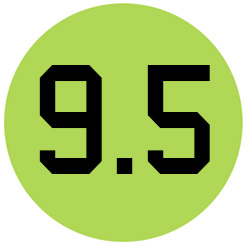