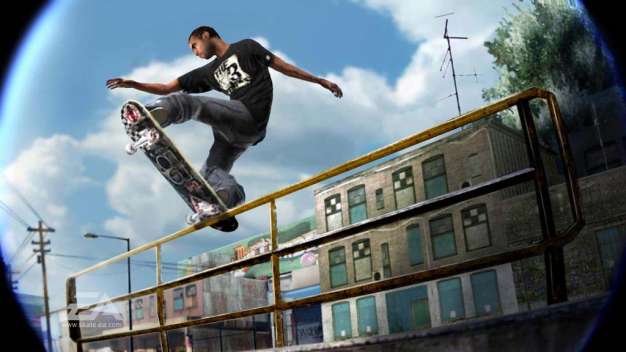 The original Skate brought a much needed touch of realism to the skateboarding genre. The over the top and undeniably frequent games in the Tony Hawk series was starting to wear a bit thin on most gamers minds. We swapped out the borderline circus acts of grinding on power lines in favor of precise analog movements and board controls. Skate 2 stays true to what made its predecessor so successful without changing too much in terms of core gameplay. While fans of Skate will embrace it with open arms, the more laid back skateboarding fan may find it perhaps a little too realistic.

Skate 2 doesn’t try to bog things down with a deep story. The player takes the role of a character who is just recently released from prison and who just wants to get back into the swing of things. After watching the live action opening, we’re taken to the skater customization screen. If you want to try to recreate a carbon copy of yourself, you’ll find it to be virtually impossible. Skate 2 has basic customizations with only a little room for intricate tweaking. While it does boast a ton of unlockable clothing, the basic body features of our character are lacking in comparison. Additional clothing, decks, wheels and jewelry can be purchased after completing challenges that reward the player with money. Some jewelry is so expensive that it would take a long time to accumulate those funds, which increases the replay value a good amount.

The skater’s appearance and sex can be changed at anytime from the pause menu – I found myself constantly tempted to change our clothing style just to see how the clothes would react to the constant bailing. A small but very welcome feature in Skate 2 is how shirts can be dirtied, shoes can be scuffed and bruises can appear as characters take more punishment. It’s this kind of attention to detail that works for Skate 2, but also contributes to its disappointments.

Skate 2 is all about pulling off tricks in the most realistic way possible. The right analog stick is used to flick the board in the direction of our choice while the bumpers and triggers act as modifiers. It can take a while to get to grips with the complex control schemes, especially while trying to maintain speed by holding down the A button. This may put off some players who just want to jump in and grind around the city, but those who stick to it will find freeskating very satisfying. Sometimes specific tricks have to be done in order to complete a challenge and progress the story along. The flaws of the flick-it controls stand out greatly in these circumstances. The player may be instructed to initiate a kickflip by holding the right analog stick down, then flicking it up at a right angle. The slightest variation in the angle will do an entirely different trick altogether. There’s no real way to nail the trick – Instead the player has to go through a process of trial and error that can get annoying after awhile. Thankfully, markers can be set whenever so the skater can instantly warp back to his or her starting position just in case the trick goes bad. 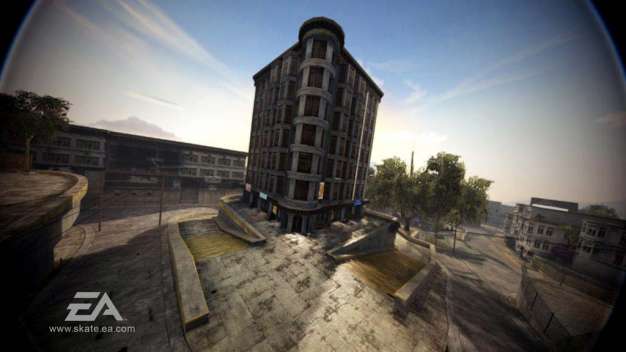 When not on the board, the skater can run around and move objects to create a sick line to conquer. It’s too bad the on-foot controls are so bad you’ll never want to use them again. The whole feel is completely unnatural. The left stick controls the skater and the right stick controls the camera, but they aren’t very responsive. It could take a couple seconds for the game to realize you want to move the camera. Also, don’t even think about controlling the camera and skater at the same time – it just won’t work. Moving objects around is more trouble than it’s worth to say the least. It’s a shame this a brand new feature in Skate 2 is probably the most poorly executed.

Skate 2 takes place in the open world environment of New San Vanelona – renamed after the city was hit by earthquakes after the first Skate. The player is not tethered to one individual part of the city at any point after the tutorials. The world is literally one big playground with the only restrictions coming in the form of security guards that will not hesitate to slam skaters into the pavement if they get too close. The player can warp to any challenge they want at any time or just skitch on a car the entire way. We recommend exploring the city because the graphics and music are impressive and that’s the only way to find certain spots that yield high score opportunities. These bits of land require a certain number of points strung together by combos in order to “own” the spot. Racking up more points, the player can “kill” the spot. Which makes for a nice alternative to just moving the story along.

The online portion of Skate 2 features some trick challenges, races, a freeskating mode and a couple of others. There’s nothing terribly original here as it feels more like a skater party. The death race matches consist of a few skaters riding downhill to the finish line while avoiding cars and other obstacles. Using Skate 2‘s default camera angle can make this mode a bit unfair because its tough to clearly see what is hurteling toward the player. Switching to a camera angle that’s positioned a little farther back helps a little but it doesn’t fix the problem entirely.

Overall, Skate 2 is the skating game to beat this year and it won’t be easy to do so. The wide open environment creates different ways to go about enjoying the game and the vast, branded clothing options beg to be unlocked. The hyper-realistic nature of Skate 2 can be off-putting to those just wanting to grind without thinking about it, but perfectionists will find mastering these controls to be its own reward.