There is this weird trend with devs for making games far more complicated than they need to. Both developers and, of course, gamers are constantly looking for the next bigger and better thing. This is fine but for some reason something being innovative is often associated with it being complex and this doesn’t always have to be the case. Fun and simple are still very good companions. Take Tetris, for example. What could be simpler than making rows out of a bunch of falling blocks? It was, (and still is,) bloody good fun though. Taking this train of thought is Sokobos; a game that is making me tear my hair out for all the right reasons. Let’s have a closer look then, shall we?

The rules in Sokobos couldn’t be any simpler. You are given a bunch of puzzle pieces that need to be pushed into place to build various structures. It’s literally as easy as pushing block A. to point B. This, however, is the problem; just because something looks simple on the surface doesn’t mean that it won’t cause you a minor breakdown in practice. This is very much the experience I had with SOKOBOS. I’m not mad at this at all, actually, I’m pleasantly surprised.

In SOKOBOS you take the role of a Greek hero tasked with building a temple to the god Zeus. To complete this rather unenviable task you have been granted superhuman strength. You’re going to need it because that’s all that you’re getting and you’ve got a hell of a lot of work to do. The other rub with a mission that’s more than difficult enough as it is, is that you aren’t allowed to ask for any help and have to complete the entire task on your own. There’s heroic and then there’s downright impractical. Interestingly you don’t seem to be able to pull any blocks either. Evidently being insanely strong only works when you’re pushing stuff, something that should really have been in the fine print when you started out on this mess. 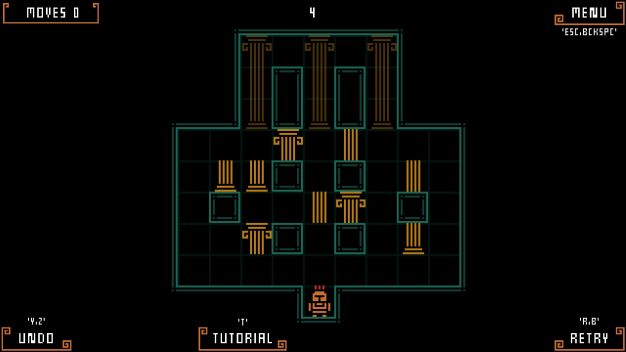 All you have to do is make three pillars. What could be simpler, right?

SOKOBOS is frustratingly hard but in the best possible way. This isn’t down to bad programming, wonky controls, or bugs. In fact, the only thing that can be blamed for you fouling up all the time is a lack of foresight on your part. Even early levels that look like they should be easy aren’t and this is all down to some very cleverly designed arenas. It’s important to remember that the walls are not your friends. If you happen to push a block against a wall and there isn’t a way of getting behind it, it’s stuck there. You can also only move one block at a time so if you have two pinned together and nowhere else to go you’re going to have to either undo your moves or go back to the start and try again. I have to admit that this was the option I took more often than not. Sometimes it’s easier to go from scratch than trying to undo a few steps and right yourself.

As you go the problems get more complex. This might be down to more pieces being shifted about or as I found out when I hit about level 7, down to the fact that you have to paint some of them. This involves pushing pieces through pools of paint that are dotted about the map. In many cases, you can only color a tile once and the pool you’ve just used disappears. So here’s an example. You have three pillars to construct, each of a different color. This involves nine pieces and nine pools of paint. If you accidentally use one of these pools at the wrong time you can’t color a piece twice so back to the start of the level you go. 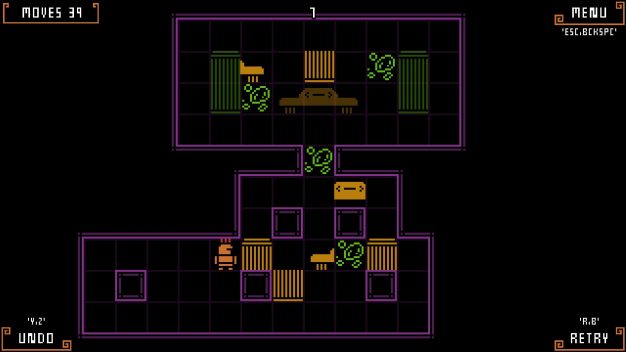 One of many failed attempts.

So, as I say, the theory couldn’t be simpler. A lot of the time you think you can see exactly what you need to do to solve a problem and when you’re halfway through your solution you suddenly realize it won’t work. You tend to realize this when it’s far too late, though, and have to go back to the start. SOKOBOS is a game of really careful planning and this couldn’t be more important if you’re interested in high scores. At the end of each level, you’re told what your score is and this is pitched against the best score for that level. In this particular case, you want that score to be as low as possible. Each time you move your score goes up and, therefore, the fewer moves it takes to complete a zone the better. Suffice it to say my scores were in some cases double the best and this all confirms to me that I suck at puzzles that involve spatial awareness, something that SOKOBOS is all about.

If we take a quick look at this title’s nuts and bolts there really isn’t a lot to complain about. The graphics remind me of something I might have seen on my C64 thirty years ago. I don’t mean this in a derogatory sense at all. SOKOBOS is a game that focuses on the puzzling aspects at its heart. As long as the core gameplay works it can be as simple as it likes. You don’t pick up a crossword and think, “my that’s a pretty looking grid,” do you? You’re interested in the function over the form. In this case, I actually really like the way this game looks and the music is fitting for what it is. After that, the controls couldn’t be simpler. Nuts and bolts-wise we’re perfect. 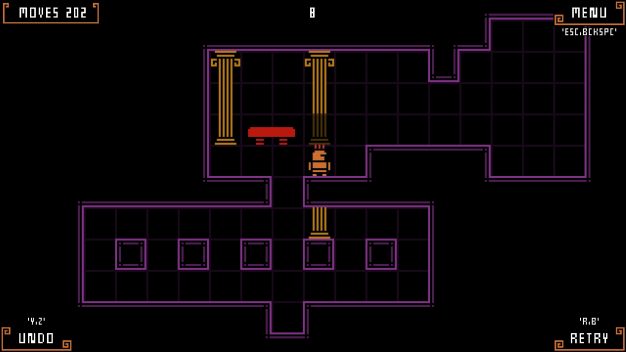 Now how do I get that last block into place? Oh look, I can’t!

If you frustrate easily I’m not sure SOKOBOS will be the game for you. This stretched parts of my brain that I didn’t even know I had and I love puzzles, if you aren’t a logical thinker I can see you having a headache after the first few levels. I got to level 10 and my brain exploded. This isn’t going to stop me from going back and persevering because I refuse to be beaten by a group of blocks on a screen but I definitely don’t think this will be the game for all. SOKOBOS also requires a fair amount of patience. You have to actually think about what you’re doing and often think three or four moves in advance. If you’re the kind of gamer that just likes to get on with things you won’t like the pace of this game. This being said, if you love to tax your gray matter and are looking for something a little bit different I honestly think that you’re going to be in a very good space here.

Not for the faint of heart.

SOKOBOS brings everything we’ve come to expect about gaming back down to its bare bones. We aren’t interested in flashy graphics or deep storylines here. All you have to do is push a few blocks about. What could be simpler, right? Let me put this simply. If you don’t like hard puzzles or are looking for all the frills we know and love, look elsewhere. If you like having your brain taxed to the point of wanting to pull your own hair out you are in the right place. Very much a case of “it is what it is,” and I absolutely love it for that reason alone.