How do you fancy commanding a giant floating donut filled with aliens? Never been asked that before have you?! Well, this is very much a question that’s being asked by Spacebase Startopia, the game that we’ll be taking a closer look at today. We’ll also be looking at whether it’s any good; obviously. I recently covered this title pre-release so if you want some of this info in a nutshell you can get that here.

I’m going to start this review with a little bit of a disclaimer. So I’m not writing from a total void and because I’m interested in what other people think, I read other reviews on the games I’m analyzing. Whether I agree or disagree with them is entirely beyond the point and they don’t affect my scoring in any way. I’m just curious to note other opinions. This is important in this particular case because Spacebase Startopia is the spiritual successor of Startopia, a title that was released over a decade ago.

What I’ve been noticing is there’s an awful lot of comparison going on. This is dangerous because if you really loved the original you’re going to be mightily disappointed if the successor, spiritual or otherwise, doesn’t meet expectations. If you’re in this mindset I think you’re going to be far more critical than if you’re coming in fresh. I, on the other hand, have no room for comparison, so I’m looking at the game from the perspective of a total newcomer. I make this point because some of you reading might be looking for comparisons and they aren’t going to be there. 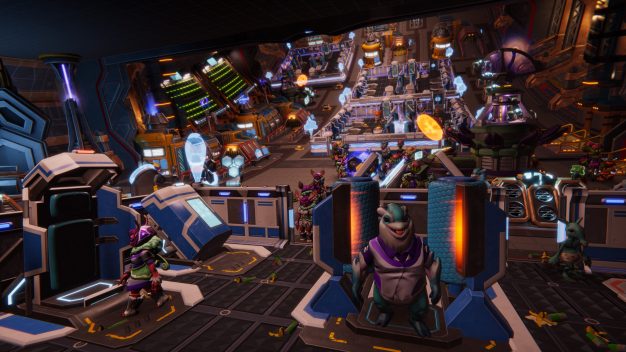 With that out of the way, Spacebase Startopia is a building sim that’s sort of in the vein of Dungeon Keeper or probably nearer to the truth; Theme Hospital. You command a space station on which you have to keep the different species of alien inhabiting it happy and make money for your bureaucratic bosses in the process. This is all done with the help of VAL. VAL is your AI and to say she’s sarcastic would be a massive understatement. Even when you’re doing well, something as small as a pat on the back is back-handed. Well, you are a primitive meat-sack with the mental capacity of a cabbage after all. Why should you expect anything less than utter disdain from your computer, right?

Each level in Spacebase Startopia is a separate mission that will see you having to meet various goals. The first three of four of these are simulated. If you don’t screw up completely you’ll get remote access to a real station from there. Your space station is split across three decks so there’s quite a bit of multi-tasking going on. These decks are your sub deck which houses your manufacturing facilities, med-bays, sleeping pods, etc, the fun deck, and the bio-deck. Not giving any one of the three of these the attention it requires is really bad for business. No bio-deck, no food. If you have aliens that want to dance you better have a dancefloor for them, and so on. There is a good amount of plate-spinning going on here which is something I really love. 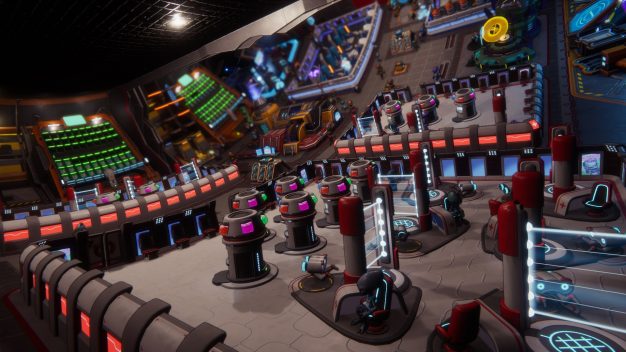 Your sub-deck. This is the heart of the ship and where you’ll spend a good proportion of your time.

The aliens in your care aren’t just staffing your station. Don’t get me wrong, you hire aliens from a large pool to make everything work, but first and foremost they are on holiday. This being said, you need to make them feel as happy and at home as possible. If they aren’t happy they will absolutely let you know about it, so keeping an eye on your demographics is a really good idea. The unhappy aliens won’t just wander around annoyed, they’ll tell you why they’re peeved. They may say the place is dirty, in which case you’ll need to deal with a garbage problem. They could tell you they can’t shower meaning you might need to build an extra berth and so on. If you can keep an eye on all of this you’ll be golden.

In Spacebase Startopia different aliens perform different tasks so you’ll need to make sure you have employed ample amounts to make everything function. As an example, your bio-dome is looked after by the nature-loving Dryads. They tend to the varying plants and harvest them for you when you’re away. These plants don’t just produce foliage but also oxygen. With this being important for basic functioning life, it’s worth making sure production is consistent with your needs. If you have an installation but haven’t hired the correct aliens to run it, it’ll just sit there looking pretty. You want everything functioning at maximum efficiency so this is worth taking into consideration. 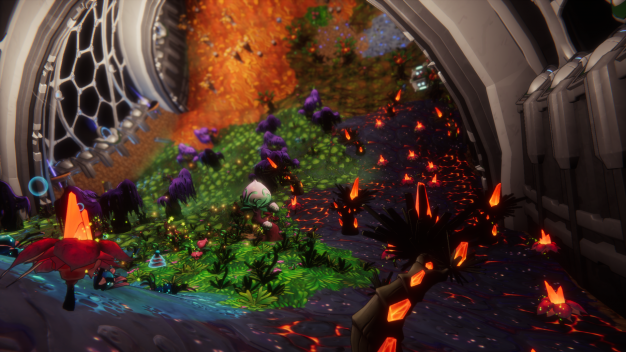 The majority of your basic resources come from your bio-deck. Look after it well!

VAL is constantly, (necessarily,) in your ear. On one mission you’re busy harvesting resources for one of your factories so need to spend a good amount of time in the bio-deck. At the same time, sick aliens are wandering about on your sub deck looking for a hospital wing. If you don’t get them looked after they’ll start infecting everyone else and sick aliens do not make for a fun time. On top of this one of your competitors is beaming infectious bombs into your station. If these go off your inhabitants are going to have more than a case of the sniffles. VAL is quick to inform you of new arrivals be they breathing or not, allowing you to deal with issues as they arise.

So, put simply, in Spacebase Startopia, there is a lot happening all at once. Personally, I loved this as having played titles with a similar feel in the past I knew what to expect. Players who want to take things a bit more at their own pace might become frustrated by the pressure. If you are one of these people, this might not be the game for you. Saying that Spacebase Startopia has three difficulty settings to play with. This is perfect for pulling you into the swing of things at a pace you feel most comfortable with. 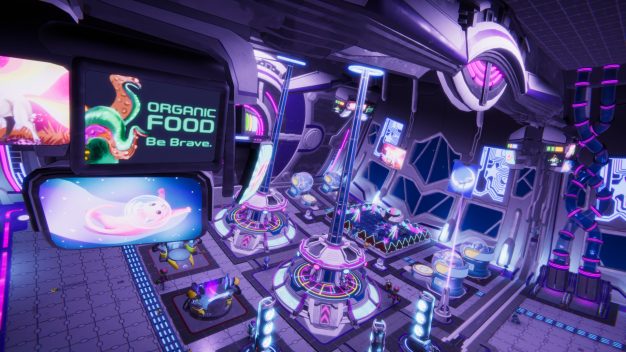 One thing I absolutely will say is PLAY THE TUTORIALS! I know we like to get straight into the game and just pick it up as we go, but in the case of Spacebase Startopia you’ll really struggle to get anywhere by just coming in cold. I ignored the tutorials on my first playthrough and regretted it straight away when I realized I didn’t understand any of the controls and wasn’t getting tool-tips.

There is no hand-holding in this game. Although VAL will tell you what needs to be done she won’t tell you exactly how to do it. I’m on a mission now that sees big carnivorous snails hatching in my bio-deck. VAL has helpfully told me that I don’t want my aliens getting eaten. She hasn’t, however, told me exactly how the machine transports work and now I need to get my mechs to another deck and they’re just standing around looking stupid. I’ll work it out but this is down to patience and the willingness to play about for a bit until I get what I’m supposed to do. If you want step-by-step instructions for everything you’ll be disappointed. 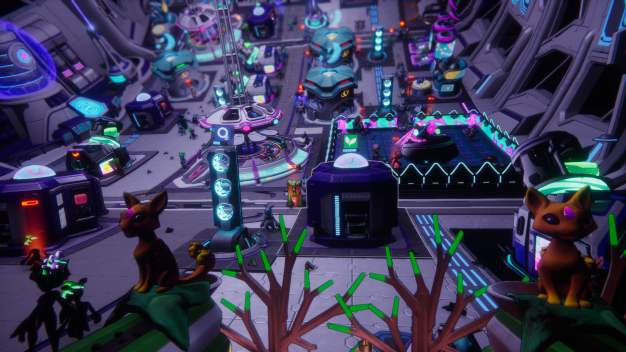 Something I’m not fond of in Spacebase Startopia is the control system. Personally, I think it’s because they’re squeezing a lot of different commands onto a console controller. Once you get used to them you’re okay but controlling this title doesn’t feel comfortable at the beginning and when the pressure is on you don’t want to be fiddling about trying to work out what buttons do what. The PC version of Spacebase Startopia likely doesn’t suffer this problem because you have a keyboard. In fairness, I don’t think they could have done any better with the PS4 release but it’s still not great.

This is a game that’s a retro building fan’s dream. As I said earlier, I have no way of comparing Spacebase Startopia to its predecessor so I’m not saying it’s better or worse. As a stand-alone entity, this game is as funny as it is frustrating. If you like games that don’t walk you through everything step by step and let you make your own mistakes, this should be right up your alley. If you’re used to having millions of save points and being reminded how to perform even the simplest actions every few steps this will likely have you annoyed rather quickly. 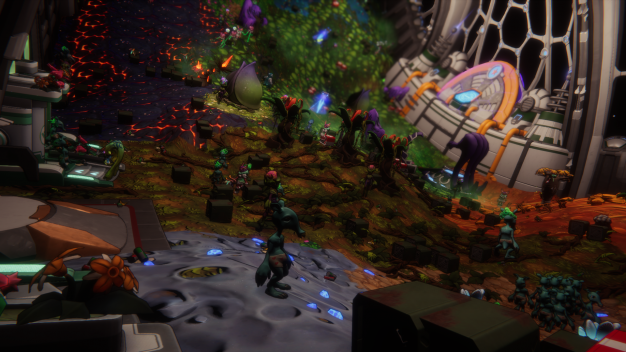 All in all Spacebase Startopia is a superb time-sink. The missions take time to do properly so you won’t be flying through the game. The three levels of difficulty, each of which will bring in differing parameters, will give you a good amount of replayability too. If you like sim games you could do far worse than add this one to your library.

If you happen to be a fan of building games, Spacebase Startopia is a very good call. This is a quirky, highly enjoyable entry into the sim genre that I think will appeal to a lot of new players. If you’ve played the original please try and take this game at face value. If you look at it as the separate entity it is you should have a lot of fun with it. Players that hate pressure would do well to steer clear but the rest of us should definitely consider giving this game a fair try.