As a gamer who has been involved with this hobby for going on three decades, there are a few titles from the early days of gaming that myself and other fans hold as the high watermark of gaming.  Like many others, Japanese Role Playing Games made up a good portion of my gaming library simply because they offered engrossing stories, charismatic characters and some of the most engaging gameplay ever made possible in a video game.  Ancillary only to games like Final Fantasy, the Y’s tales, the Chrono series and Zelda (die-hard fans may argue my examples), the Suikoden series has garnered a faithful following that is still loyal to this day.  As a way to pay tribute to these loyal fans, Konami has released Suikoden I and Suikoden II as digital downloads for the VITA and PS3.  While Suikoden I has been playable on the PS3 since 2008, on December 9, 2014 Konami released Suikoden I & II for both of Sony’s platforms as part of their PSOne Classic series.

This review will not cover any of the gameplay elements as far as how the stories in the two games unfold or the in-game mechanics unless it pertains to a specific aspect of playing them on the VITA or the PS3.  Suikoden I originally launched on December 15, 1995 and Suikoden II (considered to be the best in the series) originally launched on December 17, 1998, so there are plenty of reviews over the last twenty years that already cover gameplay and mechanics.  Instead, this review will look at how both games operate on the VITA and the PS3 so that you can choose the best console to get the optimum enjoyment from this awesome duo from gaming’s glorious past.  The nice thing about this release is that the games are Cross-Buy, so if you purchase them on one console, you can also download them on the other console at no additional charge.  That way, you can play them on the console of your choice whether you are at home or riding the bus. 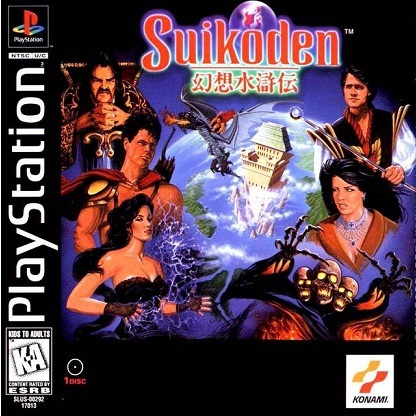 Suikoden I tells the story of the political struggles of the Scarlet Moon Empire.  You get to take on the role of the son of a general in the Scarlet Moon Liberation Army.  It is your duty to seek out the 108 Stars of Destiny; fabled warriors who can be called on to join the revolution to bring peace to a ravaged land by crushing the iniquitous sovereign state.  The game highlights a plethora of characters that you get to control and NPCs as well as over ninety characters that are usable in combat.  Many other characters can help or hinder your progress in a variety of interesting ways. 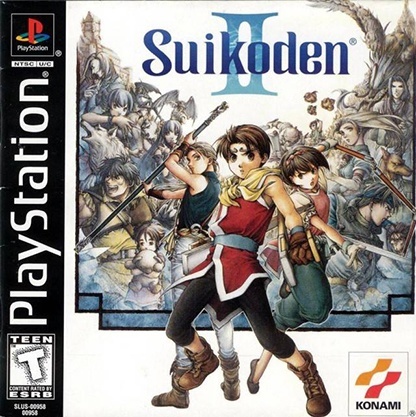 Suikoden II takes place three years after the events in Suikoden I and tells the story of the brutal betrayal and invasion by the Kingdom of Highland of the City States of Jowston.  You again get to take control of the hero, the adopted son of a warrior who, in the past, saved Jowston from a previous war with Highland.  With the help of some close friends and other allies, you set out on a journey to collect the 27 True Runes that will give you the power to annihilate your enemies and finally end the centuries old conflict.  As the head of the Liberation Army, you must gather 108 companions to join you in your fight.  Along the way, you will be caught up in the intrigues of the Highland invasion and the dark fate of those who bear the two halves of a mystical rune. 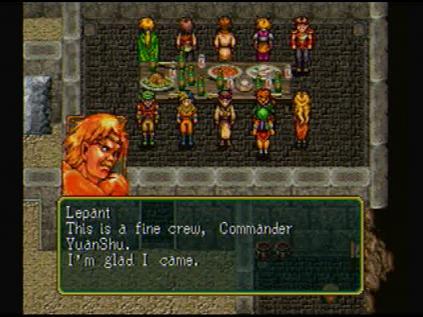 In Suikoden I & II (Suikoden I shown), you can recruit allies to help in the fight.

I’ve said it before and I’ll say it again; the VITA is a great console to play the old-school PSO games on.  Playing these games on the handheld felt natural and the fact that the PSO had such a simple controller means there was no complicated control scheme to bring over.  Most commands in the game are accomplished with just three buttons and the directional pad.  On the VITA, the shoulder buttons and the back touch-pad can double as the face buttons but I always turn those off since I have big hands and tend, often, to tap the back touch-pad by accident.  I did find it disappointing that there is no analog stick support at all for either VITA or PS3.  You have to use the directional pad to control your character as there were no analog joysticks on the original PSO controller when Suikoden I & II were in development.  Still, it would have been nice if Konami could have added that functionality to the latest release for those of us that would like to use the analog sticks instead of the d-pad.

I didn’t think it was possible to make these games look any better but I was gratefully proven wrong.  The visuals on both the VITA and the PS3 look amazing.  The brightly colored sprites that were the style of the times blazes off the screen to transport you back to a simpler era in the history of video games.  Playing these games on the small screen of the VITA and your television screen each has its own issues but overall I was impressed.  In the end, it will be up to you to decide which, if any, of the issues I present will color your decision to play these on the VITA or the PS3. 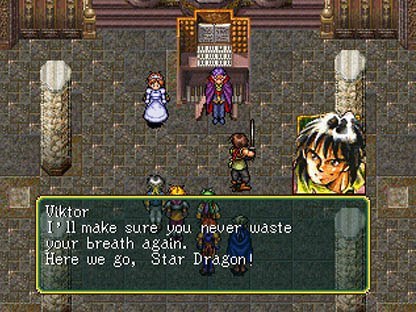 Konami managed to keep the details intact and the game looks gorgeous because of it (Suikoden I shown).

The powerhouse graphics processor in the VITA handles the games visuals with ease.  There were some issues with doors blending into the environment and other smaller game related elements (as opposed to elements that are static and just part of the background of the game) that were not easy to spot simply because they were too small to see but otherwise everything works well.  On the PS3, there are points during battles where the camera will zoom into the enemy if your attack is going to do bonus damage.  It is so close that the pixelation becomes distorted because of the higher resolutions on televisions today.  It is, as you would guess, very noticeable and it did take me out of the moment when it happened.  This, however, is to be expected with games that were made some twenty-odd years ago. 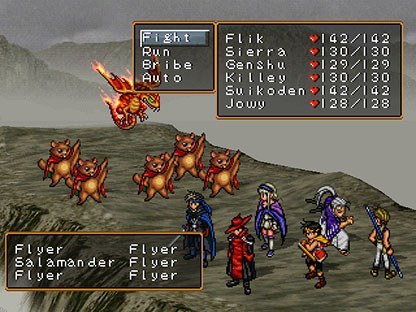 Attacks in Suikoden I & II require strategy to be successful, or you can choose auto and let the CPU figure out the details for you (Suikoden II shown).

Overall, I would have to admit that I enjoyed playing both games on the VITA and the PS3.  The remastered soundtracks are awesome and so perfectly crafted to fit the moods of the characters, the themes of the games and the intricate, turn-based battle scenes.  It was hard for me to pick one console over the other and I will probably play the games on both consoles.  Playing both games on an HDTV widescreen is fluid and looks great, considering.  However, I also like having the ability to take the games anywhere just in case I find myself out of reach of a TV.

I had never played either of these classic titles even though a friend of mine urged me to give them a try some time around 2006.  Suikoden I was already ten years old in ’06 and such a rare, underground phenomenon that I had never really heard much about it until that time.  So, since then, I have been trying to find copies that I could play and finally experience what all the excitement was about.  Having the ability to finally pick up these influential classics was exciting for me.  You can download Suikoden I for $5.99 and Suikoden II for $9.99 on the PlayStation Store now.  That is a steal considering that physical copies are currently going for $45 for Suikoden I and $500 for a factory sealed copy of Suikoden II on eBay.

Experience a couple of JRPG clasics