Speedrunners and platformer fans know all about Super Meat Boy. It was a flash game that was notorious for two things: the strict timing of jumps to avoid hazards and how fast you can complete a level. Some gamers even took it to another level where no-death runs were involved. This was one of the games that set the precedence of ridiculous hardcore platformers that circle around the videogame industry nowadays.

Cue in almost a decade later, a sequel called Super Meat Boy Forever was released for the PC (via Epic Games) and Nintendo Switch systems last year while launching to the other consoles and Steam later this year. One of the biggest, and possibly the most important, changes in this sequel is that it is now an auto-runner, whereas in the previous game you were able to control the slab of meat where you want to go and do. In my opinion, this fundamentally changes the game, because even though the bread-and-butter of Super Meat Boy is there (running, jumping, avoiding buzz saws, not getting killed, etc.), a gamer would still play an auto-runner and a platformer in a different type of way.

Let me explain. In an auto-runner, the pace of a level is constant. Although there are ways to slow down Meat Boy (who is now settled in with a wife and kid after the events of the first game) by jumping and sliding slowly on walls or holding on to yellow bumpers, these are predetermined on certain levels and not guaranteed all the time. You can also speed Meat Boy up with his attack, which is something you are often required to do to complete certain parts of a level. 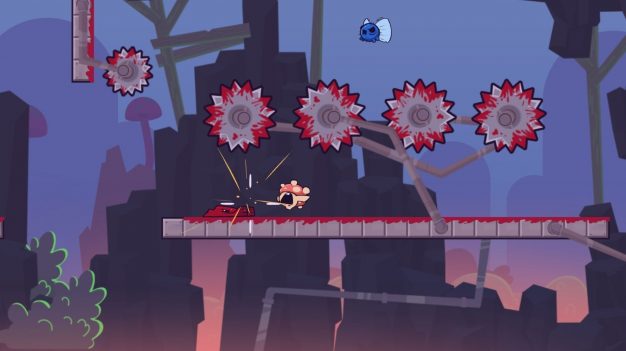 In a platformer, where you can control the movement, you are given a reprieve from the chaos. I get it, the levels in Super Meat Boy Forever are quick, but they’re frustrating as hell to complete especially as you’re constantly running through these buzz saws chasing after you, not trying to fall in a pit, as well as killing enemies without them ending you. If this was a platformer, I would be able to take a second or two to figure out what to do and where to go next, and if I fail then it’s on me. Failure in this auto-runner seems cheap and frustrating.

Frustrating to the point that on some levels, after dying, I would completely die even before I got to hit that pause button; it’s really that annoying. The game wouldn’t even stop the meat slab from running after coming back from a checkpoint. It’s go, go, go. It doesn’t even feel like the first game, where you get to fine-tune your timing and jumps (especially running, stopping, and jumping from a certain point) to get that no-death run on a level. In Super Meat Boy Forever, you’re relying more on luck to get that no-death run. 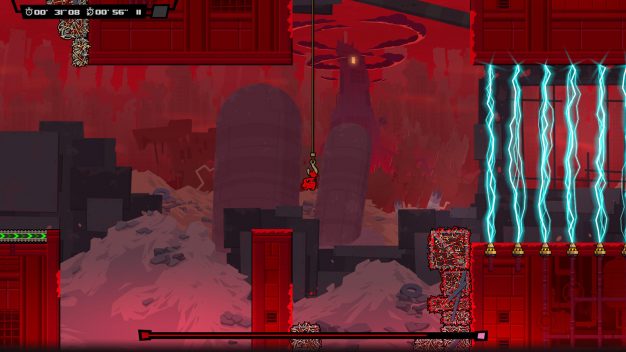 I’m not sure what the developers, Team Meat, were thinking when they decided for Super Meat Boy Forever to be an auto-runner. I wonder if they thought, “Hey, maybe it would take off the player’s load of having to hold directional button to run back and forth, and just let it always run forward.” Then again, that would not be it, since a majority of the levels do require you to have to jump on walls to go back just to jump back to another wall to go forward.

Whatever the case would be, Super Meat Boy Forever does have a couple of improvements from the first game. First, you don’t always have to use Meat Boy as your character. You are able to choose a character after unlocking them via progressing through the story as well as collecting the collectibles. Collectibles are also new in this sequel. You are able to collect these items scattered in the levels that are, to be honest, the difficult portions of those levels. 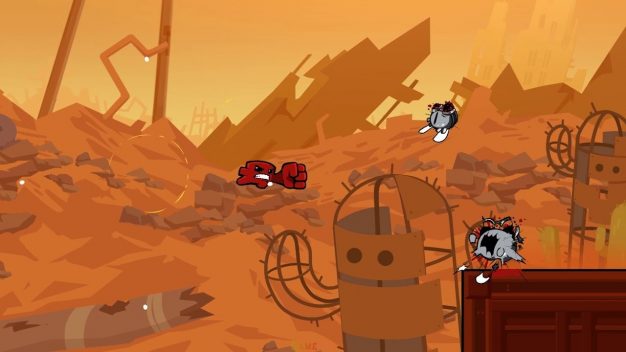 It’s easy to see how fans of the OG will not view Super Meat Boy Forever as living up to its predecessor’s hype. This may be a master class in how changing one aspect of a game’s sequel can really change how it plays and is received from the fans. It also shows that “Why fix what ain’t broken?” applies to videogames as it does in other parts of life.

Run, Jump, and Fight to Save Meat Boy's Baby from Evil Hands