Left to my own devices I wouldn’t be moved to play a licensed game like Terminator Salvation. Too many times had my heart been broken, my dreams carried along with the lofty flight of a corresponding cinematic goldmine. Usually the spell is cast on me through the movie. “Man, Iron Man was great,” I would say giddily as I skipped out of the theater, “I can’t wait to play the game!” I have learned my lesson and taught myself to ignore that siren’s song. But in this case my hand is forced. Just as the executioner says to the damned, “someone has to do it.” You’ll realize how apt that metaphor is once you play the game.

Terminator Salvation follows the formula of so many movie tie-in games before it with what I call “cinematic bootstrapping”. You take a popular game, you put all the movie’s characters in place of the original cast, pepper in some story and call it a day. The game Halcyon harvested to create Terminator Salvation was none other then Gears of War, a game so thoroughly ripped-off its sequel was panned as being too much like everything else.

So Marcus Fen… erm, John Connor is on an attack against the machines when he receives a distress call from deep in enemy territory. I would love to say the story starts from there but that would be a misrepresentation. The story does not start there, it ends there. Spoiler alert, all that happens in the entire game is saving those three guys. Expect no twists, no turns. There is nothing to collect, no side missions, no multiplayer, no unlockables, just the one campaign and three difficulty settings. For 60$. 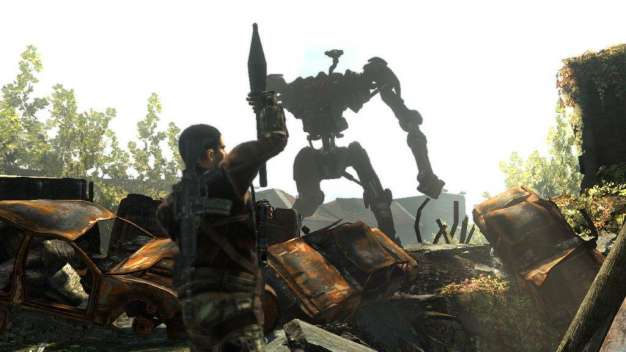 The disparagingly empty game becomes even more barren when you factor in the actual gameplay. There are eight weapons total. Two come near the end of the game but all others are available to you pretty much from the beginning. There are only five enemies in the entire game, all of which will be introduced before reaching the half-way point in the game. Oh, and did I mention the playtime was only around 4 hours? For 60$.

Salvation‘s five enemies are as follows. Wasps, they fly and basically do nothing to the player except stop them from proceeding to the next check point. That is until Mr. Connor is hiding behind cover waiting for his life to replenish; that’s about the time they zip over his head and kill him outright in one shot. Every time. Take them out first. The T-600s, or Skinwalkers, are just brutes. No strategy, just shoot them without getting shot, preferably shoot them in the face with rockets. A lot.

Next are huge tank-like robots that the game wants to call Spiders but I called Hermit Crabs. Armored on all sides except the back, they have to be flanked to do any damage. This starts out as a neat little mechanic with levels and encounters being designed around getting the drop on a powerful robotic adversary. Pop up, get a couple shots in his back, draw his fire and then have AI teammates finish him off… I said “have AI teammates finish him off”!

Oh that’s right, the AI teammates would rather huddle behind cover then ever take down the an enemy. The friendly AI team is invincible, they never die, but for some reason they also never kill anything. The one exception is Common’s character Barnes, actually voiced by Common himself. He will circle around and kill anything he’s put up against. He is also the only character that can make the player lose a mission if he dies.

Rounding out this rouges gallery are the Motorcycle Terminators and the Hunter-Killers, called HKs. Both are fun, exciting little sections that allow the player to break away from the monotony of cover-flank-shoot gameplay with HKs only being damageable by rockets and the Motorcycle Terminators showing up exclusively in one of the vehicle missions.

Yes, vehicle missions. And with vehicle missions come all that a reasonable person would expect. Gameplay in these sections is comprised of firing out of the front/back of a train/dune buggy/tank all while trying to escape from/lead an assault on robots. Unlimited ammo and overheating super-weapons for everyone! All joking aside, the gameplay in these little chunks is tight and exciting. It seems to be the only section of the game where pacing is not an issue. 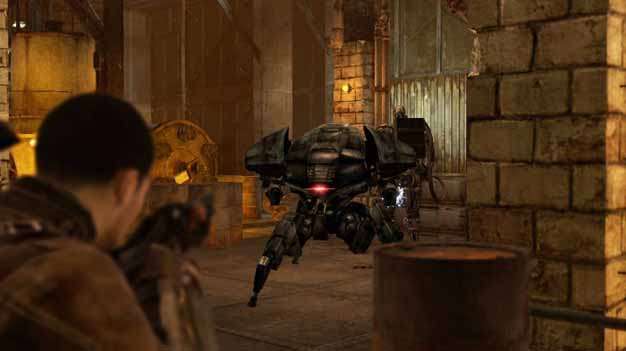 Lets get back to the game’s length really quickly. Four hours is generous. Terminator Salvation potentially has more time spent in cut-scene then in actually playing the game. If you include the credits in that assessment and play on easy so as not to die then I’m pretty sure the gameplay/cinematic ratio will be about 1:1. If load times were added to the cinematic time as well then it’s no contest. Before a cut scene, after a cut scene, at the beginning of every chapter, every time John dies, if there is any conceivable time to have a load screen then there is one. The same one. Get used to it early so you know when to use the restroom or get a snack. I’m not exaggerating.

Calling Terminator Salvation anything but a bad game would be dishonest but that’s not to say there isn’t anything nice to say about it. Moving between pieces of cover is made easier by a nice radial guide, a novel system that is intuitive and quick. The graphics and sound may not win awards but are solid. The soundtrack especially seems to channel the Terminator vibe very well. And that’s about it.

Don’t buy this game. If a friend of yours is renting it, try to talk him out of it. If they insists then play it with him on co-op and get the near-guaranteed 1000 Gamerscore for beating it on hard, which is made child’s play with the addition of another human in place for one of your incompetent but invincible side-kicks. Then never speak of it again.

+ Graphics and sound are both solid.
+ Radial cover system is useful when maneuvering.
+ Vehicle sections are a nice change of pace.

– No story worth mentioning.
– Endlessly repetitive gameplay sucks the fun out of all but the first encounters.
– The game is only 4 hours long.

About the author: Nick Coffman