This probably doesn’t say a lot for my personality, but I love dystopian settings in games. There’s something comforting about knowing that your life is utter crap right from the get go. There are literally only two ways you can go from that point. Either things get better (or at least fractionally less rubbish) or you die. As one of these is generally more acceptable than the other you’re starting on a fairly good footing. This brings me to the wonderfully cheerful world of The Ascent. This is a game that embodies the phrase, “the only way is up,” perfectly. I’ve been doing my level-headed best not to get shot to bits and I think I’m just about ready to tell you how I got on.

So as I’ve just mentioned your life in The Ascent is not all roses. You will be taking the role of an Indent – short for indentured servant – which is basically about one step above a slave. The only reason why you aren’t a slave is that you chose to go and work for one of the massive corporations that run the city. Now you have one of three ultimate options. You can get lucky enough to complete your contract, you can die of old age before you get anywhere near, or you can get your fucking head blown off. Sound like fun? We all feeling cheery? Good! Let’s get on with it.

The first thing to note about The Ascent is the graphics. My god, they’re gorgeous. This is effectively an ARPG so lots of isometric gunplay and running about. This doesn’t stop the art direction from getting sloppy though. You really feel like you are in a world where literally everything wants you dead. The cutscenes are mouthwateringly beautiful and everything draws you into the grimy, highly lethal world you’re playing in. To give this pro a small con; I have a computer that’s getting on a bit now but is still powerful enough to run with the pack. 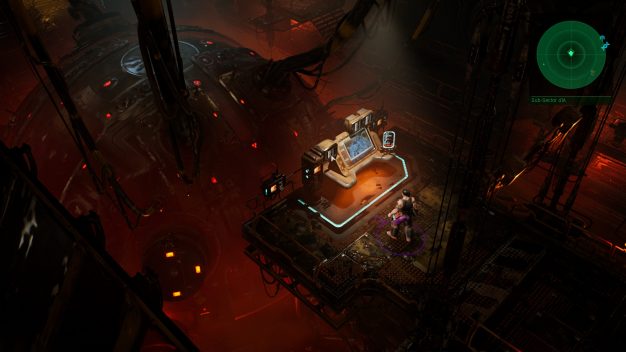 The tutorial isn’t a separate entity. You need to learn by doing here. No dry runs are allowed.

I was able to play without too many problems but I could feel that my rig wasn’t happy by the fact that it sounded like it was trying to take off. If you have a lesser system absolutely check the requirements before purchasing, I had to drop the graphic settings quite a bit to make it all feel smooth and silky. This isn’t a criticism of the game because it’s all coming down to hardware but it’s still your hard-earned cash your spending so it still makes sense to be aware.

The Ascent is a very big game with lots to do. If you have time on your hands for an epic adventure this is a really good way of going. Apart from the main missions, there are a ton of sidequests to get involved in so you can expect plenty of bang for your buck. There are a couple of things to note about all this though. The first thing I noticed was that some of these quests weren’t very clear. An example of this sees you testing a device in the field for an inventor. That’s fairly straightforward. 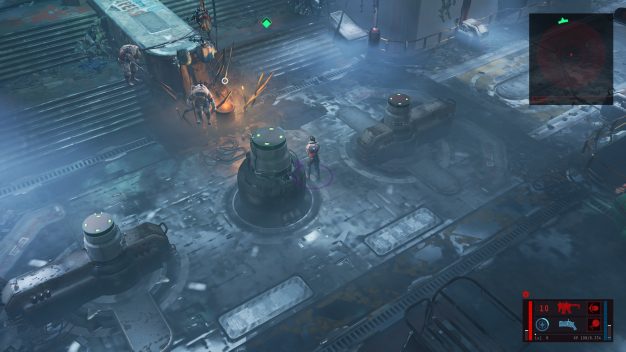 What isn’t straightforward is how you get his invention. He doesn’t just give it to you as part of the dialogue and it doesn’t just drop to the ground for you to pick up. So before you even start, you’re having to figure out how to actually begin the quest, let alone what to do once you’ve acquired what you need. For me this is frustrating. If I’m going to do something I just want to get on with it without messing about.

Another point to make is that the map system can be pretty confusing. Quest markers are lit up and you can highlight your objective and this should be enough. The problem is that these markers don’t take into account a zone that’s on multiple levels and doesn’t compensate for walls. It points you in the general direction that you need to go but when you can’t go any further and you still have an arrow pointing, “that way,” it gets pretty frustrating. If you know a level and can backtrack this isn’t a problem but if you don’t because it’s your first run there you end up lost and going around in circles. Objective markers are only useful when they make signposting where you’re supposed to go easy. 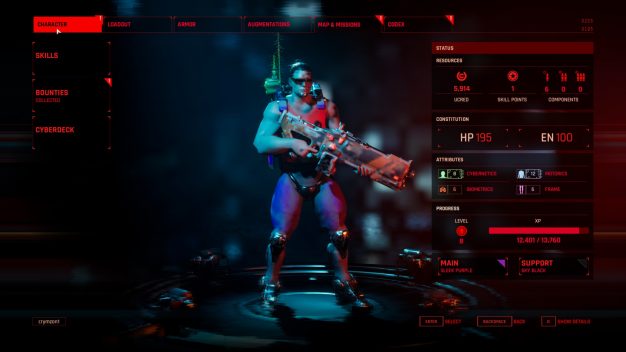 As with any game like this, it’s all about the kit.

One thing I love about the level layout is that there’s a real MMORPG feel to it. You aren’t just jumping from level to level. You can wander about feeling pretty sure you can face almost anything that particular area is going to throw at you only to cross a bridge and be faced with enemies way above your level. This makes going back to areas you’ve completed for an explore really worth doing. I like the way a lot of areas connect to each other too. This is a game that feels big because everything ties together nicely.

The first thing I did after completing the first portion of the game was to backtrack into what is known as the Deepstink as soon as I was able. I grabbed a side-quest and decided to farm a bit while I completed it to prepare myself for more difficult challenges that were no doubt coming. I quickly realized that this was a bloody stupid idea as I got eaten by ferals (a.k.a. monstrous mutants) five or six levels above me. This is actually a good thing because you know that the game is pushing you to move on instead of rerunning the same areas all the time. 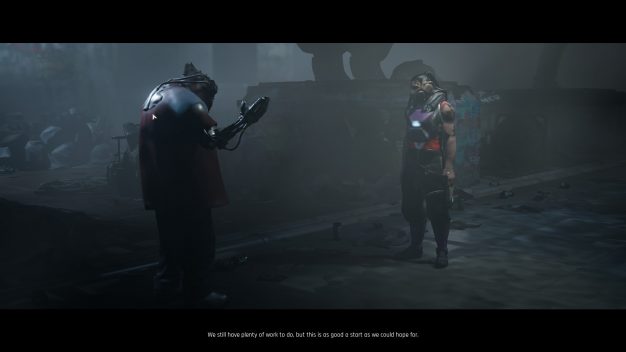 Every cut scene feels like part of a movie.

The controls in The Ascent aren’t the easiest to manage. This feels like a game designed for a gamepad and although it’s very accommodating of keyboard and mouse there are a lot of key combinations to remember. This is fine when you’re playing a game that isn’t asking for pinpoint accuracy and good reflexes but when you’re doing everything on the fly and in combat-heavy situations you want things to run as smoothly as they can. This is more of a personal thing and usually, I’m not too fussed whether I’m using a controller or keys but in this particular case I found that my enjoyment was hampered slightly by fiddly controls.

It sounds like I’m doing a lot of complaining about The Ascent, but these are relatively minor points in comparison to what the game does well. I’m a big ARPG fan and have been looking for a game that I can really get stuck into for a while. One thing that I really like is the feeling of danger you get while you play. I think one thing that hampers a lot of ARPGs is that difficulty plateaus a bit in the late game. If you have a good character build and are comfortable with a certain skillset, you’ll get to the point where you just keep leveling in certain areas until you’re godlike in playing in a particular way. 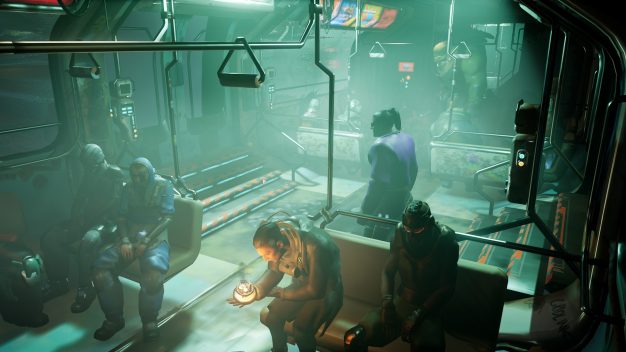 Even the loading screens are gorgeous. Lifts and trains help you stay in the zone while charging areas.

The Ascent felt a little like Diablo III, a game from a franchise that I still adore; everything was a bit of a challenge until I got into the flow. Then I felt like I was sailing through the game. Sure you can up the difficulty but as things tend to level out as you go you still find yourself moving into a similar vein. In The Ascent, I never really felt that happening. The enemies still felt like a challenge regardless of where I was so the threat felt very real.

As a continuation to my point above. The Ascent is not going to be a walk in the park. I found myself looking at a game over screen A LOT. Importantly, this just made me dig my heels in and want to go back and progress all the more. This is a testament to a good game. At no point did I feel like I was being treated unfairly or that the odds I was facing were too great. I just shrugged off the last slightly humiliating defeat and jumped straight back in to get my own back. This made passing more difficult zones and boss battles all the more fulfilling. In short, this game is hard but it’s not so hard you don’t want to continue and this is definitely a plus. 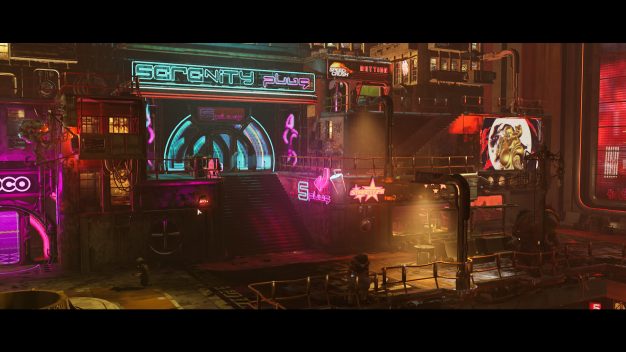 As a very simple point on The Ascent‘s story and overall writing, it’s great. The over-arching plot is dark and as I mentioned earlier really dystopian. This is not a nice world to live in and it shows. The best way to describe the feel of this is the result of Shadowrun and Cyberpunk (the genre, not the game) having a baby. Apart from the main characters that you meet along the way being fleshed out and really well written, you can see that the same level of care has gone into the rest of the folk you meet. Too many side-quests in too many adventures feel like you’re doing arbitrary thing A for totally forgetfully character B. This makes these quests feel like filler, as opposed to an intricate part of the story. At the very least they should flow into everything seamlessly and help world-building. I definitely felt that this was happening here.

All in all, if you’re looking for a new epic adventure to take part in, you could do far worse than explore The Ascent. Considering that this game is huge I’m really only scratching the surface so I won’t pretend to be completely comfortable with everything that’s going on. I’ve mentioned this before, but I think it’s really important. I’m not going to finish this review, put the game down and wait for the next thing to come along. I’ll absolutely be continuing to see what’s going to happen next. This in and of itself bodes really well for this title and if you’re looking for something new to completely eat your time you could do far worse here.

The Ascent isn’t perfect but it’s damn close. This is a game that I had a blast with alone and can only imagine what it would be like with a team of mates. A few control and UI gripes aside this is a very good way to waste a lot of time. If you like your stories big, and coming from the dark sci-fi side of things, you could absolutely do worse than getting involved in this one.